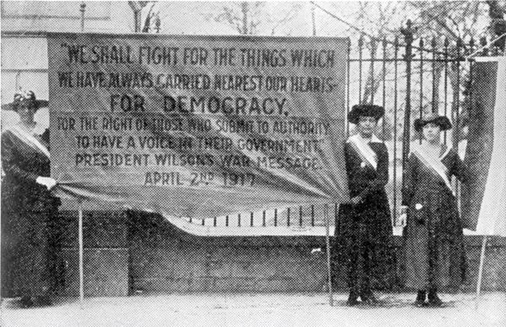 Betsy Reyneau is on the far right in this image of White House picketing, April 2, 1917. Accessible online at http://digitalcollections.barnard.edu/islandora/object/islandora:193.

Betsy Graves was born June 6, 1889 in Greenville, Kansas to Henry Ballard Graves and Lena Elliott. Her father was a Detroit lawyer, her mother an opera singer and they were the parents of two children, Betsy, and an older brother Arthur. Lena divorced Henry in 1892 when Betsy was only three years old, stating that her husband was a surly man who left her in 1889. Lena went on to state that she had no problem having her children be in the care of her husband's wealthy parents. The 1900 Census supports the suggestion that Lena's children lived separately from her. Her son, Arthur, is living with his father, Henry B Graves, in the household of Henry's father, Benjamin F Graves. However, Betsy is not living in the household with her brother, father, and grandfather. Rather in both 1900 and 1910 Betsy is living in the household of her paternal aunt, Lydia (Graves) Bowiec. Residences of Betsy's mother after the divorce have not been identified.

Betsy Bowen Graves grew up in Detroit in a prominent extended family, which included her grandfather, Michigan Supreme Court Justice, Benjamin F. Graves. Her grandmother, Ann Eliza (Laphan) Graves, was also active in civic affairs and engaged in the cause of woman suffrage. She and a neighbor organized the Battle Creek Woman's Club in 1864. In May 1874 Ann was named at the Michigan State Convention for the Woman's Suffrage Association in Michigan's Third District. She was also the first woman to be elected to the school board and was serving as president of that board at the time of her death in 1894 when Betsy was five years old.

Because her father, Henry B. Graves, also an attorney, thoroughly disapproved of her desire to study art, Betsy broke with her family and in 1904 moved on her own to Cincinnati to attend the Art Academy there. From there she moved on to Boston and studied at the city's School of the Museum of Fine Arts from 1909 to 1914. A year later she married Paul Reyneau, an engineer, and while still estranged from her family, the young couple settled in Detroit. Betsy Graves Reyneau continued to pursue her art, particularly portrait painting, but signed her work with only her initials due to the continued disapproval of her family and of society in general of women working as professional artists. Frustrated by this, Reyneau turned to the more radical wing of the women's suffrage movement and joined the local chapter of the National Woman's Party (NWP) in 1917.

When the NWP put out a call for picketers to come to Washington, DC in the summer of 1917, Betsy Graves Reyneau answered that call and would be one of the first sixteen women arrested on July 14th, Bastille Day. Sentenced to sixty days in jail, the sixteen would be pardoned by President Woodrow Wilson three days later but the fight was on and the actions of Reyneau and so many others would eventually lead to passage of the Nineteenth Amendment two years later. And there was a personal cost for Reyneau; although the couple welcomed the birth of their first child, Marie Duval Reyneau, in 1918, their marriage became increasingly strained by Paul Reyneau's total disapproval of his wife's activities, especially in the more radical NWP. The couple divorced in 1922 and Betsy Graves Reyneau moved to New York City, raising her daughter on her own while pursuing her work as a portrait painter. In 1927, she moved to Paris, wrote articles and did illustration work for The Bookman, a prominent London-based book review journal. Dismayed by the rise of fascism in Europe, Reyneau returned to the United States in 1939.

Upon her return, Reyneau was increasingly moved by the widespread discrimination against African Americans as the nation plunged into the war against fascism abroad and the portrait artist decided to do what she could to fight racism at home through her art. She first approached an ailing George Washington Carver and asked to paint his portrait which would become the only one done during his lifetime; he died three months later. Over the next several years, with the support of the Harmon Foundation, Reyneau would paint several portraits of prominent African Americans, including Mary McLeod Bethune, Paul Robeson (as Othello), and Thurgood Marshall, now held by the National Portrait Gallery. Betsy Graves Reyneau died in 1964, an activist-artist for women and people of color for decades.