Elizabeth Laughlin was born on April 29, 1841 in Scotland, Missouri, the first of three children of William and Mary Laughlin. In April 1850 her father, lured by gold in California, started west with the family in a wagon drawn by a team of oxen. When the emigrant road forked, one way leading to California, the other to Oregon, William took the Oregon branch as the California route was heavy with traffic. They settled at a military post which later grew into the city of The Dalles. They stayed for two years before they traveled by flat boat and became the first pioneers to settle Hood River. A harsh winter killed most of the family's stock and their food supply ran low. Mr. Laughlin moved his family back to The Dalles by canoe after the snow melted in Hood River. He played a prominent role as a county commissioner, a judge and in the development of The Dalles, a place Elizabeth called home for the rest of her life.

In her book, "Reminiscence of Eastern Oregon," Elizabeth spoke highly of her father's character and detailed the hardship and struggles of her pioneer experience. She married Wintworth (also spelled Wentworth) Lord in January 1861 and they had two children.

Taking an interest in suffrage in her adult life, Elizabeth participated in the Oregon Equal Suffrage Association (OESA), an organization founded by Abigail Scott Duniway in 1873. It led the six campaigns for suffrage in 1884, 1900, 1906, 1908, 1910, and 1912. The sixth attempt in November 1912 proved successful when fifty-two per cent of the (male) voters approved the ballot measure granting suffrage to women.

For the suffrage campaign of 1906, Mrs. Lord prepared suffrage mailings at the Portland headquarters, joining other out-of-towners who often came daily and worked long hours. In June 1906, Lord, Duniway, and numerous other pioneers, attached their names to a letter sent out "To the Pioneer Voters of Oregon." In part it stated "The undersigned...are now facing with whitening hair and fading vision our longed-for opportunity to secure, through your affirmative votes, the equal station with you before the law which we believe you will be proud to grant."

Later that year, she became a member of the executive committee when chosen vice-president-at-large for the OESA, a position she held for six years. While 1906 was the earliest date located for Mrs. Lord's suffrage involvement, her efforts likely began before then. A prominent position with the statewide organization in 1906 probably resulted from Lord being well-known for extensive suffrage activities in The Dalles and Wasco County. Also, a newspaper obituary for Lord noted that she had been "one of the first proponents of suffrage in the state..."

In 1908, the OESA executive committee addressed an open letter, To Every Liberty-Loving Voter of Oregon Greeting, detailing why the OESA favored the suffrage measure on the upcoming ballot. "This movement for enfranchisement of your closest friends...is wholly non-partisan, non-sectarian and non-political...we are awaiting your invitation, through the ballot box, to the possession of our inalienable right to equality with you before the law..." The officers filed an argument in favor of the suffrage amendment with the secretary of state in 1910. In January 1911 Lord served as an OESA delegate to the invitational meeting of the National Council of Women Voters. To carry out the general suffrage campaign of 1912, Duniway appointed Lord a representative for the state organization and assistant chairman of the OESA central committee.

Mrs. Lord engaged in the work of numerous other organizations. Embracing her pioneer roots, she became a member of the Oregon Pioneer Association, which organized in 1873, attended annual reunions and served on the reception committee in 1905. To preserve the grounds and buildings of old Fort Dalles, Lord assisted as vice-president of the custodian committee in 1904. The Old Fort Dalles Historical Society grew out of the committee. Its goals were preserving Oregon traditions and perpetuating its history. Lord chaired the society's landmarks committee which identified and placed brass tablets on historic buildings and sites in the surrounding area. She served in officer positions for the organization, first as vice president and then as president in 1913.

Club activities included her prominent involvement in Sorosis, a women's club in The Dalles, which aimed to encourage and advance interest in civic improvement. It had various committees, such as civics, educational, and historical, which Lord chaired in 1906. Sorosis sponsored a wide range of activities: speakers at meetings on numerous topics including good citizenship, contributions to a scholarship fund, assistance in the donation of a park to the city, and host of the tenth annual convention of the Oregon Federation of Women's Clubs; Lord served as chair of the decoration committee. She acted as the hostess for The Dalles presentation at the Oregon Building during the Alaska-Yukon-Pacific Exposition in Seattle in June 1909.

The year 1913 found Lord a member of the newly organized The Political Study Club of The Dalles. A frequent activity involved guest speakers; topics included an explanation of bills passed at the last session of the legislature and Political Economy and the Origin of Law.

"Oregon Pioneer Dies Suddenly at Trout Lake," read a headline in August 1913. Mrs. Elizabeth Laughlin Lord died of heart failure on August 20, 1913 at the age of 72. Her burial took place at the Old Fellows Cemetery, The Dalles, Wasco County, Oregon. 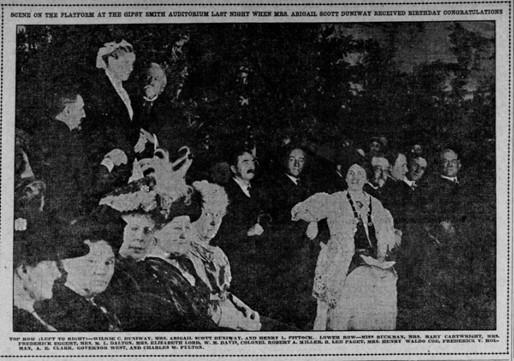 "On Her Own Wings: Oregon Women and the Struggle for Suffrage." https://sos.oregon.gov/archives