Suffragist who marched on Washington, DC; New Jersey delegate of the National Woman's Party to the Mass Meeting for Equal Rights in Industry at the US Department of Labor's Industrial Conference; Member of the New Jersey division of the National Woman's Party; President of the Newark, NJ Interracial Council; co-founder and Secretary of the Newark, NJ Urban League Guild; published author and poet

Lucy Karr Milburn was a lifelong activist, Quaker, poet, wife and mother, and a Centenarian. She was born on May 21, 1895 in the Historic District of Forest Hill in Newark, NJ and lived virtually her entire life in the DeGraw Avenue home her parents purchased from the original builder. Her life extended far beyond that house and she brought the world to her doorstep. Her parents were Minnie Schneider Karr (1855-1938) and Charles Denham Karr (1858-1926). She had a half-brother, Alfred Daniel Karr (1891-1950) who was also her first cousin. Alfred's mother was Minnie's sister Alice who died one day after giving birth to Alfred; Minnie cared for her nephew and eventually married his widowed father, Charles, in 1893.

A 1913 graduate of Newark's Barringer High School, Lucy graduated from Barnard College in 1917. At Barnard she studied biology and botany and was awarded the Herrman Botanical Prize in her junior year. In 1918 she married a childhood friend and neighbor, Richard P. Milburn (1894-1981), and they had two children, Anne and Richard.

Lucy obviously inherited her sense of justice from her mother, Minnie. In March 1913 they both marched on Washington, DC with other women's rights advocates in support of women's suffrage, and in 1926 Lucy was the New Jersey delegate of the National Woman's Party to the Mass Meeting for Equal Rights in Industry at the US Department of Labor's Industrial Conference. In the 1920's the Karr-Milburn home in Newark was the New Jersey Headquarters of the National Woman's Party.

On a local level, Lucy's other activities in the civil rights arena included serving as President of the Newark Interracial Council. She was one of the founders of the Newark Urban League Guild and served as its Secretary. Her accomplishments with those organizations included achieving rights for African-American doctors to practice in Newark city hospitals and bringing about racial integration of the Newark YMCA swimming pool.

Lucy, her husband, and her parents were all charter members of the Montclair Monthly Meeting of the Religious Society of Friends, founded in 1926. Lucy wrote the definitive history of that Quaker congregation in 1960. Her work there focused on international exchange students and American Indian affairs.

Lucy Karr Milburn published three collections of her poetry, the last when she was 83 years old. Her poems celebrate the joys of an ordinary life, showing clearly that she was someone who took the time to notice the world outside her window. In one poem she wrote of her love for her Newark home, where she lived into her 90's, and predicted that it would next pass into the hands of a family from Spanish-speaking lands. After her death, her home was sold to the family of Samuel Rivera, who campaigned relentlessly and eventually succeeded in having the Newark Preservation and Landmarks Committee erect a plaque in 2008 designating the Karr-Milburn House as a historic site.

Lucy lived the last decade of her life at a Quaker retirement home in North Plainfield, NJ. She died in 1998 at the age of 103 and is buried at Evergreen Cemetery in Hillside, NJ.

[Author's Note: Much of this sketch is based on interviews with Lucy's neighbors and fellow church members.] 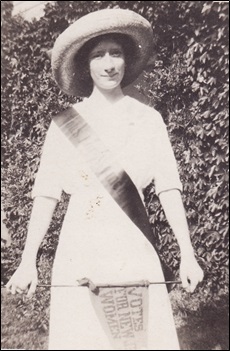