Helen Parks was born Helen R. Roberts on November 13, 1852 to Morris Hughes and Sarah Pelletreau Roberts in Brooklyn, New York. She went by the nickname Nellie. Morris Roberts was a Welsh immigrant who worked as a baker in Brooklyn until his death in 1865, when Helen was twelve years old. Following his death, Sarah Roberts worked as a pie baker to support the family. Helen Roberts married George Winant Parks, a jewelry salesman, on July 8, 1879 in Brooklyn, New York. The couple lived with his mother in Brooklyn and had three children—Ethel Winant Parks, born in 1880, George Elton Parks, born in 1882, and Roy Robert Parks, born in 1886. Roy Parks died at three years old in 1889. In 1892, Helen and George Parks and their children moved to Providence, Rhode Island.

In Rhode Island, George W. Parks became a prominent and wealthy businessman. He was a co-founder of a jewelry manufacturing company, Parks Brothers and Rogers. When that company was dissolved in 1905, he founded the George W. Parks Silver Company and served as its president until 1919. George and Helen Parks were active on the Providence social scene, traveled frequently, and spent the summers at the shore in Watch Hill, Rhode Island. George Parks also became active in Rhode Island politics. He served as a councilman on the Providence City Council from 1900 to 1908, ran unsuccessfully for the United States Senate in 1912 as the Progressive Party nominee, and ran unsuccessfully for mayor of Providence representing Republican and Progressive Parties in 1914.

Helen Parks, usually going by the name Mrs. George W. Parks, frequently attended and sponsored arts events in the community. By 1900, she joined the board of managers for the Irrepressibles, an organization in Rhode Island that offered social services for the community, such as providing employment to women in need and clothing to poor families. By 1913, Parks became active in the woman suffrage movement in Rhode Island. That year she was one of the founding members of a new suffrage organization, the Rhode Island Woman Suffrage Party (RIWSP), and was elected its treasurer. Woman suffrage was a family affair for the Parkses. Her adult daughter, Ethel Parks, was an active suffragist and often participated in events with her. George W. Parks became a strong supporter of woman suffrage in his career as a politician. Sara Algeo, founder of the RIWSP, called George Parks, "a loyal advocate of woman suffrage.

In 1913, Helen and Ethel Parks were among the "principal workers" for a three-day bazaar put on by the Rhode Island Woman Suffrage Party to raise money and awareness for the cause. Helen Parks gave a speech at the event and her husband spoke as well, giving suffrage his official endorsement. The Woman's Journal, a suffrage publication, reported that:

Mr. Parks saw a bright future for the young women who believe in equal suffrage. He told them it was only the older men who hang back from this step of progress, and that the younger men, who are educated in co-educational colleges and who see efficient women in the business of the world, will not make it so hard for women to obtain a voice in public affairs.

The following year, Helen and Ethel Parks worked again at the RIWSP bazaar. The party held a prominent ball in 1914 as a suffrage fundraiser. Parks served as a member of the arrangements committee and a patroness for the gala. The Providence Journal praised the "indefatigable efforts" of the committee for "the success of the affair." At a 1914 RISWP suffrage rally, Parks' husband gave a speech supporting woman suffrage in which he claimed that he was "representing the 'voting end' of the Suffrage Party." In addition to her work with RIWSP, by 1914, Parks was an active member of the Rhode Island Woman Suffrage Association (RIWSA) and was elected vice president of the organization. Parks worked at a RIWSA suffrage booth at the Pure Food Fair in Providence in 1914. The fair was a prominent event and RIWSA distributed and sold suffrage literature and merchandise at it. Helen and Ethel Parks held a suffrage event at their home in December 1914, at which twenty-five of their friends, primarily not woman suffrage supporters, attended to learn more about the cause and hear a speech by Mrs. Barton P. Jenks, a prominent Rhode Island suffrage leader.

In 1914, George W. Parks ran for mayor of Providence on the Republican and Progressive tickets. At a rally, Bertha G. Higgins, an African American member of the Rhode Island Woman Suffrage Party, spoke in favor of Parks' candidacy. The Providence Journal reported that she stated, "the suffrage party feels very friendly toward the Progressive party, as it was the first to adopt the suffrage plank" and that "she urged the men present to vote for Mr. Parks, the Progressive candidate who is favorable to the cause." When George Parks spoke later at the event, he agreed with Higgins and declared that he was "heartily in favor of woman suffrage."

In 1915, Helen Parks was a speaker at the inaugural "Woman Suffrage Forum" held by RIWSA. In her speech, Parks drew on maternalist ideas about suffrage—the idea that women were more nurturing and domestic than men and needed the vote in order to represent these feminine values in society and protect their homes and families. According to the RIWSA meeting minutes, Parks explained that the woman suffrage was needed "in the interest of pure food laws, including the great question of the milk supply under sanitary conditions, and as to quality." She also mentioned that suffrage could help with issues including the "proper housing, removal of garbage, and many other instances of municipal house-keeping which affect the home." Parks ended her speech by stating, "the greatest need for the equalization of the sexes, the only thing that will help to make the whole world better—the Ballot."

In 1915, RIWSA, RIWSP, and the College Equal Suffrage League amalgamated into a new organization, the Rhode Island Equal Suffrage Association (RIESA). Parks was elected treasurer of RIESA, a position she held for two years. For two decades, RIWSA had been lobbying in favor of a bill that would provide Rhode Island women the right to vote in presidential elections. In 1915, it was leading another campaign for presidential suffrage. The Judiciary Committee of the Rhode Island Assembly held a hearing about the bill and Parks testified in favor of presidential suffrage. After the hearing, a mass suffrage meeting was held that evening. George W. Parks presided at the event and Helen Parks gave a speech. The presidential suffrage bill was not successful in 1915 but two years later, in 1917, the assembly and the governor passed the bill. When Governor R. Livingston Beeckman signed the bill, Ethel and Helen Parks attended the event and were among eleven suffrage supporters featured in a photograph with the governor in The Providence Journal.

In 1918, Parks was elected chair of the ways and means committee and auditor of RIESA. When the United States entered World War I, the National American Woman Suffrage Association urged suffragists to be active in the war effort, as a way of demonstrating their patriotism and citizenship and bringing good publicity to the woman suffrage movement. George W. Parks was the director of campaign run by the Providence branch of the American Red Cross to send Christmas presents to men serving overseas in the war. Helen Parks assisted him in this effort and the couple was praised in the 1919 NAWSA Handbook for their work "sending thousands of packages to our boys in Europe." At a local woman's club meeting, George W. Parks gave a patriotic speech about the war and emphasized "women's opportunities to-day and laid stress upon woman's part in supplying forces to supplement the fighting force that is bringing the war to a victorious ending."

In the spring of 1919, in anticipation of the ratification of the woman suffrage amendment, NAWSA began to transition into the League of Women Voters, an organization to lobby for the successful passage of suffrage and to prepare women to be educated and effective voters and citizens. Helen Parks became one of nine incorporating members of the League of Women Voters, Rhode Island State Division, which emerged out of RIESA. Parks had little effort to be active in the League of Women Voters, though, because her family moved to Detroit, Michigan in the fall of 1919 when George Parks was appointed the president of the National Motor Car Company of Canada. The family lived in Detroit until 1922 when he retired and they moved to Brookline, Massachusetts, a suburb of Boston. George Parks died in 1929 and soon after Helen Parks and her daughter moved to Santa Barbara, California. They later moved to Greenwich, Connecticut before settling in Whitefield, New Hampshire in June 1932. Several months later, on October 19, 1932, Helen Parks died in Whitefield from liver cancer. She is buried in the Green-Wood Cemetery in Brooklyn, New York, with her husband and son. 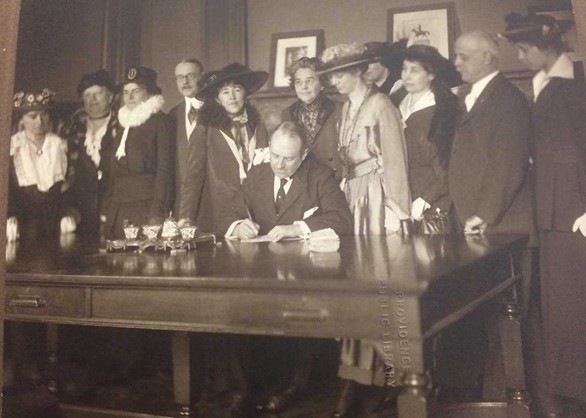 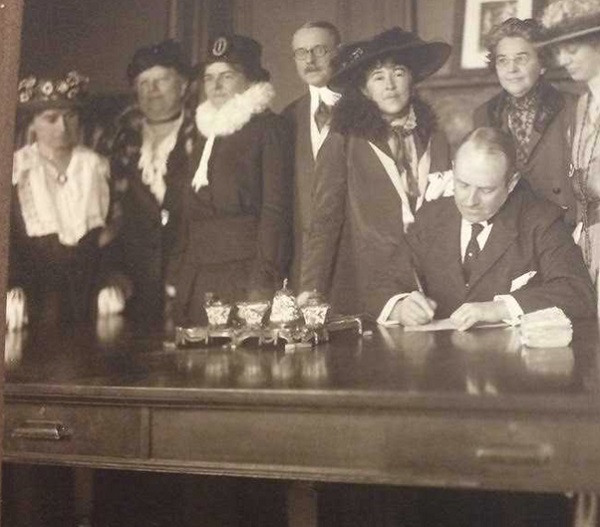 Acts and Resolves Passed by the General Assembly of the State of Rhode Island and Providence Plantations at the January Session, A.D. 1920 (Providence, RI: E.L. Freeman Company, Printers, 1920).

Frank Sylvester Parks, ed., Genealogy of the Parke Families of Connecticut; Including Robert Parke, of New London, Edward Parks, of Gilford, and Others (Washington D.C., 1906).

"Women in Politics Lauded by Senator," The Providence Journal, January 24, 1914.