Harriet "Hattie" Mary Pond was born on March 26, 1863 in Eau Claire, Wisconsin to Maynard Pond and Janet Anderson. She married John Roger (JR) Sherman on August 16, 1885 in Berlin Heights, Ohio. The couple had three sons: Roy H Sherman (1887), John J. Sherman (1895), and George L. Sherman (1897). By 1900, the Sherman family lived as farmers in McCloud, Pottawatomie County, Oklahoma. Sometime between 1900 and 1910, JR and Hattie divorced. In the 1910 census, Hattie was listed as divorced and living with the two younger sons in Portland, Oregon. In 1916, they moved to Craig, Colorado and in 1924 purchased a boarding house at 713 Yampa Avenue in Craig, which she is listed as running in the 1930 census. She sold the boarding house in 1936 and bought another in Grand Junction, Colorado. In the 1940 census, she was listed as a roomer in Loveland, Colorado. She died there in 1948 and was buried in the Craig Cemetery.

Hattie Sherman served as auditor of the Second Annual Convention of the Oklahoma Woman's Suffrage Association held October 26 through October 28, 1905 in Chickasha, Indian Territory. She and Minnie K. Bailey are listed as the authors of an article in the Chickasha Daily Express (31 Oct 1905) outlining the resolutions of the Equal Suffrage convention and thanking Dr. Frances Wood "for her untiring efforts in our cause of justice and right." Although her name appears ninety-nine times in the Craig Empire Courier (from 1929-1944) [including a 1932 entry for reimbursement of $43.65 for caring for the county poor], she does not seem to have been active in any women's groups pushing for the ERA. 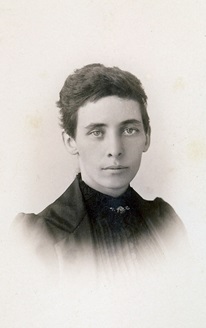