Bertha Rombauer was born in 1872 in St. Louis, Missouri to Roderick Emile Rombauer and Augusta Koerner Rombauer. Roderick served as a St. Louis Court of Appeals judge, and her mother was the daughter of Gustav Kerner, former lieutenant governor of Illinois and ambassador to Spain under President Lincoln. Roderick originally came to America from Hungary, and the Rombauers became a prominent political family in the St. Louis area. Roderick and Augusta had seven children: Theodore, Edgar, Alfred, Bertha, Sophia, Pauline, and Irma. Her brother Edgar was married to Irma Rombauer, nee Starkloff, the author of The Joy of Cooking. Edgar also served as Speaker of the Missouri House of Representatives.

Bertha attended the New York Library School and served a short stint as a librarian at the Mead Public Library in Sheboygan, Wisconsin in the early 1900s. In 1907, Bertha Rombauer was listed in the St. Louis city directory as "Stenographer and Notary." In May of 1914, identical articles titles "Employed by University" appeared in women's sections of both the Pennsylvania New Castle Herald and The Tampa Tribune about Bertha's employment as the registrar of the Washington University Medical College. The article lauded Bertha as "one of the most successful young women" and indicated that her "remarkable success in doing all sorts of work" attracted the attention of Washington University management. Bertha is listed as registrar of the School of Medicine in the medical school's annual catalog in 1919, however it is unclear how long she remained in that role.

It appears Bertha became active in the suffrage movement around March 1910 when she attended a meeting of the Wednesday Club at the Cabanne Branch Library in St. Louis, where Florence Wyman Richardson spoke. In April, Bertha attended a meeting at the home of Richardson, where prominent St. Louis club women came together to organize a local branch of the National American Woman Suffrage Association, to be called the St. Louis Equal Suffrage League. Bertha was eventually elected Treasurer of the newly created League. She also served as the Corresponding Secretary for the St. Louis Equal Suffrage League and the Recording Secretary for the State Woman Suffrage League.

As part of her suffrage work, Bertha often delivered speeches. In addition to outdoor soap box speeches, Bertha spoke on women's suffrage to organizations such as the Tenth Ward Improvement Association, the Missouri Press Association, and the St. Louis Railway Club. On September 11, 1914, Bertha became the first women to speak before the Railway Club. In her speech, she advocated for passage of the 13th Amendment to the Missouri Constitution, which read: "Females shall hereafter have the same right under the same conditions to vote at all elections held in this State as males now have or may hereafter have." In her speech, Bertha addressed the popular argument that a "woman's place is behind the cook stove," and questioned that even though "women are professional home makers, that should not be an obstacle to their casting a vote."

Bertha also helped organize the Golden Lane Women's Suffrage Demonstration where 7,000 women in yellow sashes marched down the street to lobby for woman suffrage on the occasion of the 1916 Democratic National Convention in St. Louis.

Not much of Bertha's life after the suffrage movement has been recorded. Bertha never married and died June 23, 1943 at the age of 70. She is buried in Bellefontaine Cemetery in St. Louis, Missouri. 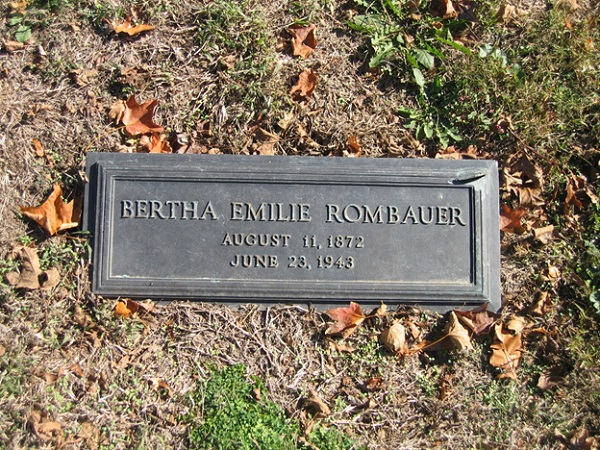 Information about Bertha and her and her contributions to the women's suffrage movement can be found in newspapers such as the St. Louis Globe Democrat, St. Louis Post Dispatch, and St. Louis Star and Times. The Sunday, October 13, 1912 issue of the St. Louis Star and Times published a short article by Bertha called "The task for 1914" in a feature on prominent St. Louis women involved in the suffrage campaign. Bertha's speech to the St. Louis Railway Club can be found in volume 19 of their official proceedings on page 133. https://books.google.com/books?id=AOciAQAAIAAJ&lpg=PA369&ots=8FpgIqQ7Zo&dq=bertha%20rombauer%20%22St.%20Louis%20Railway%20Club%22&pg=PA369#v=onepage&q&f=false.

A history of the Rombauer family can be traced in A piece of migration history through the Rombauer family tree by Pál Koudela published in 2016. Accessible online at http://cejsh.icm.edu.pl/cejsh/element/bwmeta1.element.desklight-b695a5c9-b8eb-4524-9f74-00b06f1d9e5a/c/pal_koudela_46-70.pdf.

Bertha's father, Roderick, wrote a history of his life-- The history of a life (Washington, DC, 1903).