Note: Definitive and confirmable biographical data, including dates of birth, marriage, and death, were not located for the suffragist Josephine Monahan. Specific information about her suffrage activities was found; most likely the Josephine Monahan who engaged in political activity was the same person as the suffragist. The probability was based on the use of Josephine or Josie for a first name, and having San Francisco as a residence.

Monahan marched with three hundred women in California's first suffrage parade the night before the Republican Party's August 1908 convention in Oakland. The next day, two hundred suffragists, including Monahan, marched in pairs to the Republican convention and sat in the gallery as a show of force for woman's suffrage. However, the Republicans refused to put a suffrage plank in its platform, unlike the Democrats who had incorporated suffrage into the party platform in 1908.

As reported in The San Francisco Call article titled "Suffragists Drop Husband's Names" on October 3, 1908, "the delegates who gathered in convention had determined to assert their independence, even in minor matters." They used their own Christian names, yellow badges were worn, suffrage literature was in evidence at the convention site, and "the nation's flag had been sternly denuded of the stars that stand for those states that still deny women the ballot, and the blue background could boast of only four stars."

"One Hundred of the State's Brightest Women Open Equal Suffrage Convention In Stockton," headlined an article about the CESL convention in 1909. Monahan, one of the "state's brightest," attended as a delegate from the San Francisco Equal Suffrage League.

To raise awareness and publicity for suffrage, the CESL sponsored various activities, including a banquet, and a carnival at a local park where booths were set up, leaflets handed out and speeches given throughout the day. Monahan participated in both events. She attended and served as a hostess at the CESL dinner for their legislative friends, and assisted on the reception committee for the carnival which was described by The San Francisco Call as "one of the largest ventures ever undertaken by the suffragettes."

Monahan also engaged in Democrat party politics. The article titled "Women's Champ Clark League Organized," noted that Monahan was elected president of the state League which was founded in February 1912. The league formed to support James Beauchamp "Champ" Clark, the Speaker of the House of Representatives, in his bid to become the Democratic nominee for president. "We are sparing no effort to reach every woman voter in the state..." stated Monahan. "Many have worked hard for suffrage," she said. "We have decided that there is most encouragement for women in the Democratic party. We must all get together now and find out the women who have registered and get them to support the Clark movement and get those women who have not registered to go to the polls as soon as possible."

Led by Monahan, the League worked fervently to gain support for Clark. Branch leagues were established in every county in the state and every assembly district in San Francisco. House to house canvassing occurred in San Francisco. Monahan and Florence Hartell, state organizer for the Democrats, travelled by auto to visit various counties to carry the fight for Clark. Success for Clark ensued when every county voted in the majority for Clark enabling him to win the California delegation to the Democratic National Convention. Monahan and Hartell, who worked night and day to organize the state, were given credit for the success of the league and the bringing to victory of their candidate. Monahan's belief in the right of women to engage in political matters led to the loss of her job as matron of the hospital service. She had obtained a two month's leave of absence on the grounds of illness to lead the statewide activities of the Women's Champ Clark League. Charged with unnecessary leave by the Civil Service Board, Monahan resigned her position as matron.

At the Democratic National Convention in June 1912 after forty-six rounds of voting, Champ Clark lost out to Woodrow Wilson for the presidential nomination. Monahan had planned to organize a Democratic woman's party after the convention. It appears Monahan fell out of doing political work once Clark did not get the nomination.

No further information could be found on Monahan other than she was registered to vote in San Francisco starting in 1912 and continuing at least into the 1930s. 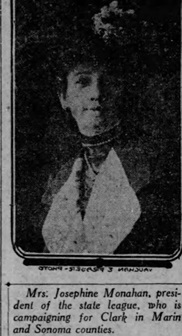