Mabel Bates was born in 1868 and raised in Traverse City, Michigan. Her parents were Thomas Tomlinson and Martha E. (Cram) Bates. Because her father was president of the Herald and Record Company that published the Traverse City Herald, she gained an interest in the newspaper business that provided her a future career. Her writing skills were probably enhanced by her mother, who was described as "a woman of rare personality, a gifted writer and an all-around newspaper woman."

As a young single woman, Mabel Bates served as junior superintendent of the Michigan Christian Endeavor Union. The union consisted of many religious denominations, including Church of Christ, Episcopal, Presbyterian, Wesleyan Methodist, African Methodist, Free Will Baptist, Congregational, United Brethren, Friends, and the Reformed Church. She attended their annual conventions in 1897 and 1899. At the July 1899 convention she reported that Michigan had 311 junior societies with a membership of eleven thousand. Six hundred twenty individuals graduated that year. Thereby increasing statewide church membership by approximately six hundred.

Mabel Bates met and married Carlton Clifford Williams on July 14, 1906, in Traverse City. Like her father, Carlton "Carl" Williams also worked in the newspaper business as state editor of the Grand Rapids Press. Before her marriage Mabel Bates was associated with two Traverse City newspapers, the Herald and the Record. She was editor of the "Home Cheer" column for the Herald. She served as president of the Michigan Women's Press Association. In 1895 she showcased her oratorial ability, when she presented a five-minute paper at the Michigan Press Association. After their marriage, they resided in Denver, Colorado, where her husband worked for the Denver Post. Again, she wrote a women's column for the Scientific Farmer, published by her husband.

In 1911, while living in Denver, Mabel Williams attended the Sixth International Dry-Farming Congress held in Colorado Springs. She and other women editors and writers for the farm press, who attended the Congress, organized the International Farm Women's Press Association. At that meeting, she was elected secretary-treasurer. When the organization met again in 1912, she served as secretary. Williams gave a talk at the third annual conference that was held in Tulsa, Oklahoma, in 1913. At a meeting held in Oklahoma City in April 1916, she served as secretary pro tem.

Circa 1913, the Williamses moved from Denver to Oklahoma City. Carl Williams established the Oklahoma Farmer-Stockman newspaper that was published by the Oklahoma Publishing Company. Mabel made a name for herself as editor of the newspaper's women's section known as "Good Cheer." In 1922 the newspaper had a circulation of 138,000 readers. Through the column she advised farm women on how to improve their home and on how to raise poultry as well as assisting each other through "mutual helpfulness." Mabel also used the column to endorse the Good Roads Movement, advising her readers that better roads would connect the farm family with better schools, churches, and markets for their eggs and other farm produce. Through extension work from the Oklahoma Agricultural and Mechanical College (A&M college; now Oklahoma State University) in Stillwater, Oklahoma, she helped organize farm women's clubs between 1913 and 1922, increasing the number of clubs from twenty to approximately 250 clubs. The farm women's clubs followed course outlines produced by the A&M College for their meeting discussions.

In addition to her newspaper work, Mabel Williams (Mrs. Carl Williams) was active in the suffrage movement. The first mention of her work for suffrage occurred in 1917 when she was elected third vice president of the Oklahoma Woman Suffrage Association, an affiliate of the National American Woman Suffrage Association (NAWSA). She and other Oklahoma suffragists including Abbie Hillerman, Alberta Daughtery, Alice Heaney, and Roberta E. Lawson formed a suffragist committee to lead a campaign for the adoption of a state constitutional amendment for women's suffrage. Her well-known name in the publishing business certainly enhanced her ability to bring the necessity of women's suffrage to the forefront in the state's political issues. The Oklahoma legislature passed a suffrage amendment to the state constitution on November 5, 1918.

Williams was also affiliated with the second district of the Oklahoma Federation of Women's Club and served as vice president of the Town Club of Oklahoma City in 1923. She lectured widely around the state on topics relating to women, especially farmer's wives and daughters. She discussed their need to study farming, so that they could be independent of a husband, if necessary. Apparently, Williams was a member of the domestic science department of the Sorosis Club because she hosted a meeting on January 5, 1917.

In 1929 the Williamses moved from Oklahoma City to Washington, D.C., where Carlton worked for the Federal Farm Bureau under the Herbert Hoover administration. When he retired in 1933, the couple moved to Fort Pierce, Florida. While living in Florida, Mabel became a well-known botanist and a member of the Fort Pierce Garden Club.

Mabel and Carlton Williams had no children. According to federal census records, Mabel's younger, single sister Clara "Carrie" Nettie Bates lived with them from 1920 to 1940. Mabel (Bates) Williams died on June 22, 1949, in Fort Pierce, Florida. She was buried there in the Riverview Memorial Park. She was survived by her husband and sister. 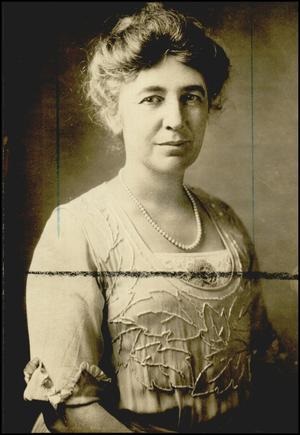 "This photograph is part of the collection entitled: Oklahoma Publishing Company Photography Collection and was provided by the Oklahoma Historical Society to The Gateway to Oklahoma History, a digital repository hosted by the UNT Libraries."