Joujou Edith Converse was born on July 5, 1878 in Newport, Rhode Island to Admiral George Albert Converse and Laura Shelby (Blood) Converse. Admiral Converse was an officer in the United States Navy, served in the Spanish-American war, and reached the rank of Rear Admiral. The family moved frequently due to her father's military career, living at times in Newport and Bristol, Rhode Island; Vermont; New York; and Washington D.C. J. Edith Converse spent three years attending school overseas before returning to Washington DC in 1904. The Boston Globe described her as "quite beautiful" and "prominent in Washington and Newport society circles."

J. Edith Converse married LeBaron Carlton Colt on June 10, 1904 at St. Michael's Church in Bristol, Rhode Island. They had known each other for many years, yet friends and family considered their marriage rather sudden. Only eight close friends were invited to the wedding; none of their family members attended. The couple lived in Bristol and had three children together - LeBaron Carlton Jr., Joujou Edith, and George Albert. Mr. LeBaron C. Colt came from a prominent and historic family. He was a descendant of the DeWolfs, a wealthy merchant family who were active in the slave trade, William Bradford, the first governor of the Plymouth Colony, and the LeBarons, who also were early Plymouth settlers. LeBaron C. Colt's great-uncle, Samuel Colt, invented the Colt revolver and founded the Colt's Patent Firearms Manufacturing Company. His father, LeBaron B. Colt, was a political leader in Rhode Island who served as a representative in the Rhode Island General Assembly, was appointed as a justice to the newly-created United States Court of Appeals for the First Circuit, and was elected to the U.S. Senate in 1913, a position he held until his death in 1924. LeBaron B. Colt's brother, Samuel P. Colt, was also a prominent politician and founded the United States Rubber Company (later renamed Uniroyal). LeBaron C. Colt worked his uncle's rubber company as general manager and vice president.

J. Edith Colt became active in the Rhode Island woman suffrage movement, usually under the name "Mrs. LeBaron C. Colt." Her earliest reported involvement was in 1914, as president of the Bristol County Equal Suffrage League (BCESL), a branch of the Rhode Island Woman Suffrage Association. However, it is likely that she was active in the organization prior to serving as an officer in 1914. She was president of the BCESL from 1914 to 1918, when she moved out of Rhode Island. Sara M. Algeo, a leading Rhode Island suffragist, claimed in her memoir that, "Mrs. LeBaron C. Colt of Bristol, was born a suffragist, I am convinced."

With her prominent father-in-law and family members, Colt had valuable connections and influence in Rhode Island. Algeo viewed these family ties as a useful asset to the suffrage movement. She explained that J. Edith and LeBaron C. Colt were "in a position to render great assistance to the cause of woman's suffrage, both on their own account and through their uncle, Samuel P. Colt and Mr. Colt's father, Senator LeBaron B. Colt." LeBaron C. Colt was a strong supporter of the supporter of woman suffrage and was the first male member of the Bristol County Equal Suffrage League. Algeo continued that "'Barry' Colt was one of the most popular men in Bristol and lent himself to the suffrage cause when it needed his moral and financial support the most."

In 1915, the Rhode Island Assembly was considering legislation that would have allowed women to vote in presidential elections. (Presidential suffrage was ultimately passed in Rhode Island in 1917). LeBaron C. Colt gave a statement in favor of the bill and woman suffrage in general. He wrote:

I believe in equal suffrage for adult men and women. When we look back a century and note the wonderful advances made by womankind in all activities of life, and the broadening of all her spheres of influence; realizing also her progress has been marked for good and not for evil, and then think of her outlook for the future as she takes her place beside men in the management of the affairs of life, I am convinced that the attaining of the ballot is merely an incident in woman's progress and not an end. The mother is the primary influence in the bringing up the child, and children reared by mothers who are conversant with and interested in the affairs of the nation will guarantee a future people better and more purely schooled in the welfare of our country, our State and community.

In his statement, Colt drew on maternalist ideas about woman suffrage, that women had different traits and responsibilities than men and giving them the right to vote would be beneficial to family and the nation. LeBaron C. Colt died in an automobile accident at his family's farm at the age of thirty-nine in 1916. Afterward, J. Edith Colt continued her work in the woman suffrage movement and raised her children as a single mother.

Beyond LeBaron C. and J. Edith Colt, Sara Algeo reported that Samuel P. Colt, one of the leaders in the Rhode Island banking community, was a "good friend" to the Rhode Island suffrage movement. J. Edith Colt's father-in-law, Senator LeBaron B. Colt, was not initially a supporter of woman suffrage. According to the suffrage publication, The Women's Journal, when a group of suffragists met with him in 1915, he refused to commit to supporting the suffrage amendment. However, by 1916 at the Republican National Convention, Senator Colt announced his support for woman suffrage and he voted to ratify the woman suffrage amendment when the Senate passed it in 1919.

J. Edith Colt supported the woman suffrage cause in Rhode Island in numerous ways. In 1914, Colt and Algeo led a group of suffragists to canvas members of the Rhode Island Assembly on the topic of woman suffrage; they were each assigned a different member to interview. As president of the BCESL, she frequently hosted league meetings at her house, including a 1916 tea where Alice Park, a prominent suffragist from California, spoke to the members of the BCESL. In 1915, she initiated a campaign to increase the membership of the BCESL from its current 180 members. At a 1915 league meeting, in honor of her birthday, the members presented Colt with a large bouquet of yellow roses, tied with a yellow ribbon, for her birthday, yellow being a symbol of the suffrage movement. Under her leadership, the BCESL started the "Bristol Civic Forum" which held public lectures in 1917 on topics including, "Americanization," "Prohibition," and "Citizenship, the Basis of Democracy." Colt also attended meetings of the Rhode Island Equal Suffrage Association (the Rhode Island Woman Suffrage Association renamed the organization in 1915) and served as circulation chairman for the state of Rhode Island of The Woman Citizen, a suffrage publication. In 1915, she traveled to Washington DC to attend a congressional hearing about woman suffrage.

Colt was active in World War I voluntarism, in line with the National American Woman Suffrage Association (NAWSA)'s strategy of using women's war work to increase support for suffrage. In 1914, she belonged to a Bristol committee of the British Relief Association. She formed a branch of the Junior Defence Guard of the Navy League in Rhode Island in 1917 and allowed the members to use a bath house on the family property as a clubhouse. Her sons belonged to the defense guard in Washington DC. Her daughter planned to start an auxiliary of Red Cross girls under twelve years of age.

More prominently, Colt was appointed treasurer of the Rhode Island campaign for the National Women's Overseas Hospital in 1917. NAWSA created and funded the overseas hospital effort, to create a hospital in war-torn France, primarily to serve women and children but also wounded or ill soldiers in emergencies. The chairman of the Rhode Island campaign was suffragist Sara Algeo. Colt and Algeo organized fundraisers, gave speeches, procured donations from prominent individuals and friends, and sold candy at 10 cents each; in total, the Rhode Island effort raised $3000 dollars in Rhode Island for the hospital.

Algeo and Colt were especially interested in Americanization efforts in Bristol, Rhode Island because it was reportedly sixty percent foreign-born at the time. Algeo explained in The Providence Journal that Colt was valuable to the campaign "through her connection with the rubber works, where a larger number of foreigners were employed, and her knowledge of Italian." Colt's committee distributed circulars and conducted a series of meetings about naturalization and citizenship, with speakers such as Mary Antin, a prominent immigrant author, and provided translators for people who spoke Italian or Portuguese at the meetings. She also arranged for a clerk of the Rhode Island Superior Court to set up a temporary naturalization office in the Bristol courthouse for a three-day event in 1918. The goal was to increase naturalization rates by making it easier for local residents to apply for citizenship in Bristol instead of having to travel to Providence to do so. Colt's committee took out advertisements in the Bristol newspaper in order to raise awareness of the event. Sara Algeo referred to Colt's Americanization efforts in Bristol as "thorough and far reaching."

In 1918, two years after her husband's death, J. Edith Colt and her children moved to her family's estate in Norwich, Vermont. When the nineteenth amendment was successfully ratified in 1920, she sent a telegram to be read at the victory dinner in Rhode Island. She lived in Norwich, Vermont for the remainder of her life until she died in 1952, at a hospital in nearby Lebanon, New Hampshire. 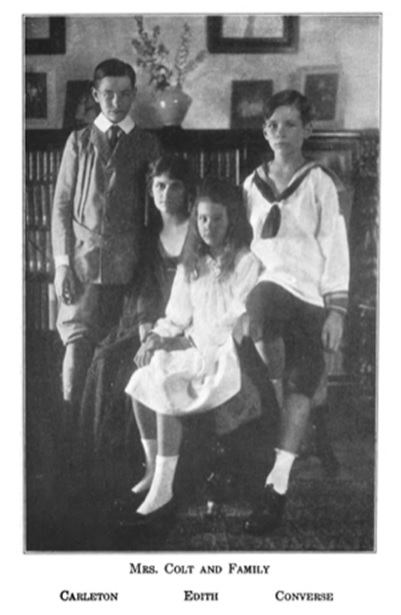 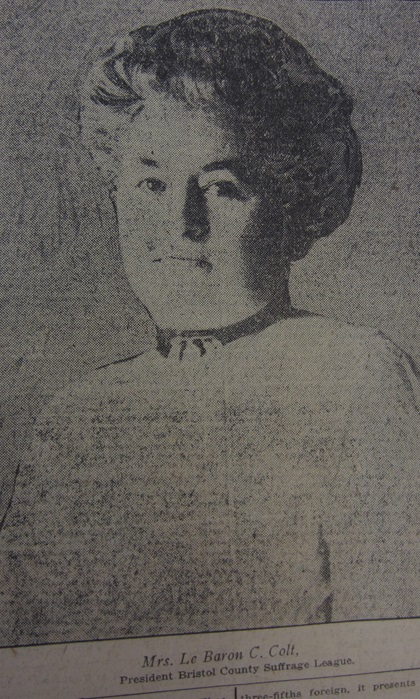 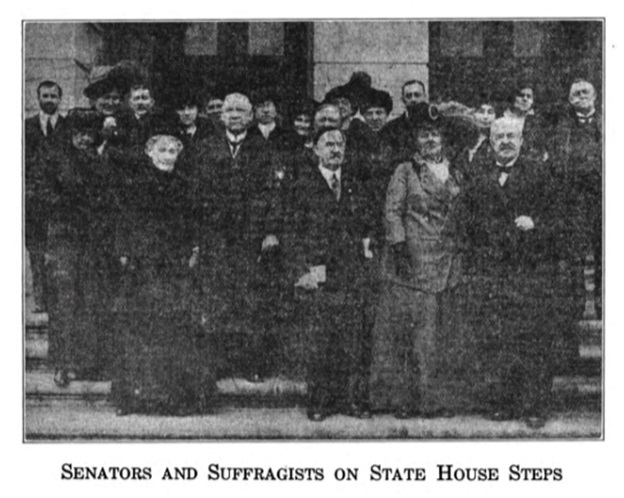 Colt and other suffragists pose with Rhode Island politicians after lobbying at the State House in February 1914. Sara M. Algeo, The Story of a Sub-Pioneer (Providence, RI: Farnham & Co., 1925), 181.