Regional Director for the League of Women Voters (1920) head of the Tennessee women's committee for the National Council on Defense Allied Relief Fund in World War I (1917), Nashville Teachers' Association head (1915-1918), head of history department at Hume-Fogg High School in Nashville, TN, (1912-1934 intermittent), chairwoman of Suffrage Red Cross auxiliary in World War I (1917)

Della Dortch, a prominent suffragist and the first Regional Director for the South for the League of Women Voters, was born in Nashville, TN on July 11, 1867 to Willie Blount Dortch and Medora Brown Dortch. Her family was politically very well-known - she was a great-granddaughter of Tennessee Governor Willie Blount and a granddaughter of Tennessee Governor Aaron Brown. Her nephew, Hill McAlister, became governor shortly before her death.

When Hume-Fogg opened in September 1912, Ms. Dortch became the first female to head the history department. According to the local newspaper, the Tennessean, she brought the history department up to an enviable standard, one that was recognized by "the nation's leading educational institutions."

She attended her first meeting of the Tennessee Equal Suffrage Association at the Hermitage in 1912. According to the Tennessean, she declared she was a suffragist at a May, 1915 suffragist banquet "because she believed a woman could render a larger social service to the world with the ballot than without it."

In June, 1917, The Nashville suffragists organized a Red Cross Auxiliary and selected Ms. Dortch as their chair. They met at the Hermitage Hotel. At the time of this formation, there were over 5,000 enrolled suffragists. They undertook the task of raising money and making hospital supplies. Given their large numbers, they opened participation in the auxiliary to anyone, not just registered suffragists.

On September 4, 1917, Ms. Dortch was one of many speakers, including Tennessee Governor Rye, to welcome Tennessee soldiers to the Ryman Auditorium as they passed through Nashville on their way to World War I. Her words brought tears to the eyes of the people there, and she presented the soldiers with comfort kits on behalf of the women of Tennessee, including suffragists who had raised money for the kits.

Ms. Dortch resigned as Chairman after she became head of the Tennessee Women's Committee for the National Council on Defense Allied Relief Fund. In this capacity, she raised funds for Belgian relief. When the war ended the Belgian Minister in Washington, D. C. wrote a letter to the editor of the Nashville Banner newspaper in which he acknowledged Dortch's work with the Junior Belgian Relief Society in Nashville that raised fifteen hundred dollars for Belgian orphans.

As World War I ended, Della turned more of her attention to the suffragist cause, becoming more focused on the suffrage movement. She also started nonpartisan women voter classes in Nashville, the first of which were held at Hume-Fogg in April of 1920, but spread throughout the state. This was formalized in Nashville into the Women's Citizenship School in May, 1920.

Ms. Dortch became one of seven regional directors of the League of Women Voters when it formed in February 1920. Her region was the Southeast, and she presided over a regional meeting in March of 1920 in Atlanta. During the summer, she travelled through the region. However, she cut short her trip to return to Nashville in early August of 1920 to advocate for ratification. Working with other suffrage leaders, and given her knowledge of politics in Tennessee in particular.

On August 21, 1920, the Nashville Tennessean newspaper noted Della Dortch's contribution to suffrage. "Miss Dortch is given great credit by suffrage leaders for a large share of the success attained in Tennessee." Jessie Haver, the legislative secretary of the League of Women Voters said that "Miss Dortch represents the kind of Southern woman who is rapidly coming to the front in our national life and who has a different contribution to make to the politics of our country."

When she passed away after an illness on December 8, 1935, it was on the front page of the Nashville Tennessean. 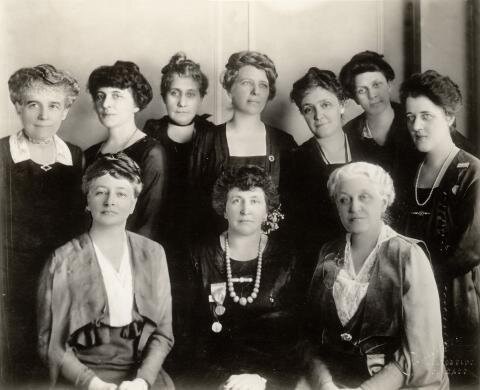