Bettie Donelson was a member of several groups that made important contributions to civic causes that she felt deserved attention. Among the social issues she championed were: women's suffrage, education, support for military veterans, prohibition, and President Andrew Jackson's legacy. In 1889, Bettie organized and became a charter member of the Ladies Hermitage Association; in 1894, she helped originate and develop the plan for the Woman's Department of the Tennessee Centennial; in 1907, Bettie became chairman of the Davidson County Woman's Christian Temperance Union; between 1907 and 1921, she was regent of the Ladies Hermitage Association; in 1916, Bettie was president of the East Nashville Equal Suffrage League; in 1918-1920, she was chairman of the Seventeenth Ward Suffragists; from 1922 until the 1930s, she was president of the Andrew Jackson Society; also in 1922, Bettie was vice-chairman of the Thirteenth Ward Democratic Women; and in 1923 Bettie was a delegate to the World Conference of Women in Washington, D.C.

In 1887, when Bettie was 25 years old, she attended an official election. Although she couldn't vote, she was intrigued about the process of voting and the fact that women were not allowed to vote. She soon became involved in a grassroots effort to win suffrage. Bettie's first support of woman suffrage was in 1894. Bettie and her mother, Georgia Hooper Mizell, were described in a Nashville newspaper that year as "Prime movers" of the Nashville movement. Like-minded women across the state organized suffrage clubs in their communities, and in 1897, they met at a convention held in Nashville. The women organized the Tennessee Equal Rights Association at that convention. Lide Meriwether was elected president, and Bettie Donelson was chosen to be secretary. Recalling those early days in the movement, Bettie wrote: "At that time it required a woman of strong purpose and heart to be counted as a suffragist and brave the caricatures from the artists' pencils, and the malicious and undeserved reproach from the pens of editors and literary critics." Twenty-five years later, at the age of 60, after the ratification of the 19th Amendment, Bettie was elected vice-chairman of the Thirteenth Ward Democratic Women. Eight years later, Bettie was a member of the Advisory Committee of the Davidson County League of Women Voters, the successor to the suffrage association.

Bettie was a housewife who was devoted to her family, civic charities, and woman suffrage. Her suffrage activism increased after her husband was killed by William Giles Baker in July of 1900. Bettie was a speaker at the Equal Suffrage Demonstration in Nashville in 1914. During her speech, she emphasized education and declared that women needed the ballot to protect their business interest - the American home. In 1916, the Tennessee Equal Suffrage Association organized five wards in East Nashville and Bettie became president of the newly organized East Nashville Equal Suffrage League. The Tenth Tennessee State Suffrage Convention was held in Nashville on February 4, 1917, and Bettie was one of the two hostesses. William Jennings Bryan (member of the U.S. House of Representatives for Nebraska, Secretary of State under President Woodrow Wilson, and Democratic nominee for the 1896, 1900, and 1908 presidential elections) attended the convention. There were many elected officials who were supportive of women's suffrage, but were outnumbered by those who opposed. The suffrage convention was planned the same week the Tennessee Senate was to vote on a bill that would give the women of Tennessee the right to vote in presidential and municipal elections.

As Bettie continued her civic work and fight for women's suffrage, she was highly sought after for other leadership roles. In 1918, she was elected chairman of the Seventeenth Ward Suffragists and spearheaded the organization with great success and was re-elected to a second term in 1919. Bettie was one of the most active and persistent workers for suffrage in Nashville that had a county membership of six thousand suffragists. She attended every rally and convention held in Nashville. She attempted to procure a seat on the Nashville Board of Education in 1916 (Knoxville already had a woman on their Board of Education). The mayor of Nashville refused to appoint a woman, so Bettie was unsuccessful.

Although women secured the right to vote in 1920 when her state, Tennessee, became the required thirty-sixth to ratify the Nineteenth Amendment, Bettie continued her commitment to women's rights by advocating for any advancement deemed necessary for the women of Tennessee. Mrs. Bettie Donelson was highly respected in her city and her state. She supported women's rights throughout her adult life until the day she succumbed to her illness at her home in Nashville on December 7, 1939. 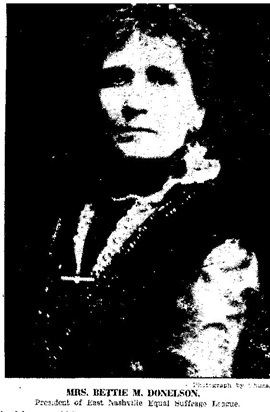 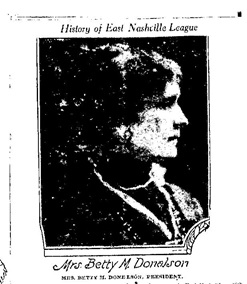