Constance Genevieve Howland was born in Lawrence, Kansas, in 1875. She was the daughter of a Unitarian minister, Rev. Clark G. Howland, and Marcia Brown Howland. On June 26, 1900, she married Thomas Henry Chalkley, a well-respected businessman and citizen in the community, with whom she had two daughters, Marcella and Hilda. Her aunt, Rev. Olympia Brown (Willis) of Wisconsin, is thought to have influenced her path in becoming a suffragist.

The first reference to Mrs. Chalkley's support for woman's suffrage appear in 1904, when she attended a meeting of the Lawrence Equal Suffrage Association. In 1909 she became the First Vice-President of the Douglas County Equal Suffrage League. She also served as State organizer and was appointed to the state Association's advisory board. In March 1911, she hosted Sylvia Pankhurst when the famous British suffragist came to speak in Lawrence, Kansas. Mrs. Chalkley served as a district president in the campaign to amend the Kansas Constitution to allow for woman's suffrage in 1911-12. After suffrage was achieved in November 1912, she became president of the renamed Good Citizenship League. When she ran to become a member of the board of education in 1919, The Lawrence Daily Journal described her as "one of the women whose activity and judgment" had "made success possible" in the fight for woman's suffrage. After ratification of the 19th Amendment, Constance Chalkley served as president of the Douglas Country League of Women Voters in 1921-1922.

Mrs. Chalkley was also a powerful voice for charity and reform work, taking on such tasks as securing funds for women's public restrooms in Lawrence, Kansas. In 1911, the Topeka State Journal reported that the Kansas governor had appointed Mrs. Chalkley to serve on a board of visitors to inspect state institutions, describing her as "a woman well known in charitable work." The same year she served as a district president for the Kansas Equal Suffrage Association. In 1913, the year after Kansas women won the vote, Mrs. Chalkley was elected president of the Good Citizenship League - renamed from the Equal Suffrage Association after Kansas women secured the vote. In 1915, she was appointed to the newly created industrial welfare commission, created by the Republican-dominated state legislature in order to set hours and wages of women in industry. Mrs. Chalkley also joined numerous women's organizations and patriotic and lineage organizations, including the Federation of Women's Clubs, the Kansas Council of Women, the Kansas Colonial Dames, the Kansas Society of Mayflower Descendants, and the Betty Washington chapter of the Daughters of the American Revolution in Lawrence, Kansas, to name a few.

Though Mrs. Chalkley became a widow after her husband passed in 1916, she remained deeply involved in the movement. Through her community involvement, she became a pioneer of the women's suffrage movement in her home state. Her many leadership roles and community involvement reflected a lifetime of dedication to women's rights, up until the age of 89, when she died and was buried in her hometown of Lawrence, Kansas. 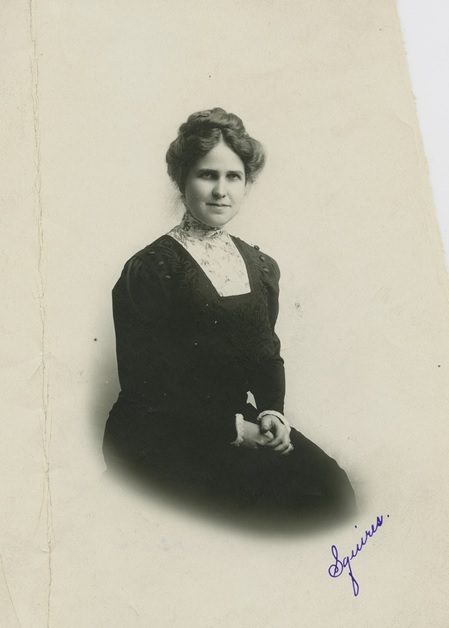