Aimee Hutchinson (Torriani) was born in New York City on April 23, 1890 to Joseph Hutchinson and Jennie Torriani. Her father worked in various capacities for Thomas Edison, including as general manager of the Edison United Manufacturing Company and in the office of the Edison Shafting Department. Her mother studied voice in Paris under renowned mezzo-soprano Mathilde Marchesi, a devotee of the classical Italian tradition of bel canto. Torriani was a distinguished opera singer and vocal instructor in New York City. Hutchinson's grandfather, Angelo Torriani, was a conductor, voice teacher, and director of Italian opera at the Academy of Music on East Fourteenth Street from the mid-1850s through the early 1870s. Aimee and her older sister, Lenore, received voice instruction from their mother and enjoyed modest success in opera and musical theater in New York during the late 1910s and 1920s. In a 1923 interview, Jennie Torriani noted that both daughters possessed "beautiful voices," although she commended Lenore, who sang soprano, for taking "her work far more seriously" than her younger sibling. Despite an irregular commitment to voice training, Hutchinson nevertheless had a knack for earning parts in major stage productions. She was cast as "Susan" in a revived 1917 Broadway performance of When Johnny Comes Marching Home and later appeared in George M. Cohan's The Royal Vagabond (1919), as well as the musical comedy Topsy and Eva (1924). In 1922, she played "Gretta" in the silent film, If I Were Queen, based on Du Vernet Rabell's short story, "The Three Cornered Kingdom."

Before her turn to the stage and screen, where she was known as Aimee Torriani, Hutchinson acquired a different kind of fame as a Catholic school teacher and suffrage activist. On May 4, 1912, she was one among more than 10,000 women to march up Fifth Avenue in a massive "Votes for Women" parade organized by the Women's Political Union (WPU). The demonstration brought New York women together from all walks of life, as the New York Times described, from "suffrage organizations and women's clubs, theatrical people, [and] Quakers" to a "small army of trades union women and Socialists." Hutchinson marched in a division of musicians and made her intent to participate in the rally no secret to her employer - the Church of the Blessed Sacrament at Broadway and Seventy-First Street. She grew up in the parish and had served for five years as a secretary and assistant teacher under the school's rector, Father Matthew A. Taylor. But when Taylor learned of Hutchinson's activism shortly after the May 4 demonstration, he asked for her resignation, telling Hutchinson that he disapproved of women's suffrage as a "personal matter" and considered the suffrage movement an "open door to socialism." Taylor's decision to fire Hutchinson created a brief sensation in the New York press, and the WPU, led by Harriot Stanton Blatch, seized the opportunity to expose the incident as an attack on free speech and a clear example of the kind of intimidation that pro-suffrage women faced from employers who disagreed with their views. "Miss Hutchinson is our first martyr," said Blatch on May 21, "and we will do our utmost to see that she loses nothing by this sacrifice she has had to make to uphold her principles." After her dismissal, Hutchinson joined the Woman's Suffrage Party of New York City and worked as a speaker and organizer. The party's newspaper, The Woman Voter, reported in 1916 that she led organizing efforts for the seventeenth assembly district. She also served as treasurer of the short-lived Suffrage Pure Food Store on Broadway and Ninety-Sixth Street in 1913.

By 1917, Hutchinson began to drift from suffrage organizing toward a career in acting and writing. While her most notable work as a performer occurred on Broadway prior to 1930, she earned renewed attention in the 1930s and early 1940s as a playwright and novelist. Her play "Four to Go," about the lives of four women attempting to find their way as Hollywood actresses, first appeared off-Broadway in the fall of 1936. The comedy was shelved, however, for script revisions and cast changes before resurfacing in June 1941 as "Four Girls on a Dime." The play ran for less than two months at the Radiant Center (Adelphi Theater) in New York before labor strife derailed production. A second play, "Milan in May," based on Hutchinson's experiences during an extended trip to Italy, was performed at summer playhouses in the Catskills in 1938. Her novel, The Jester's Prayer: A Tale of Troubadours, debuted in 1942. As evidence of her enduring longevity in American musical theater and film, one of her final credits as a performer came in 1955 as an extra in Alfred Hitchcock's blockbuster film, To Catch a Thief.

-"Suffragists to Get Position for Girl Discharged for Being in Their Parade," New York Press (May 22, 1912). 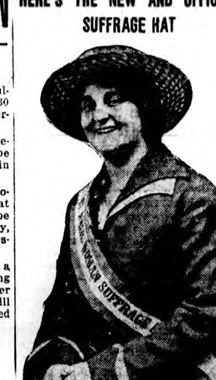