Mabel Cronise was born to Charles Cronise and Martha Lyttle Cronise on June 18, 1860, in Tiffin, Ohio. Cronise graduated from Toledo High School and matriculated to Lake Erie College. Although her parents had planned a teaching career for her, Cronise left to pursue her childhood dream of becoming a journalist after only a few years. In 1886 she began working at the Toledo Enterprise and in 1887 traveled to Europe where she became a correspondent for several papers. In June of 1890, Cronise married Harrisburg newspaper editor Thomas Macdowell Jones. In 1892, their daughter Dorothea Jones was born.

Mabel Cronise Jones was a prominent civic activist and author. In 1891 Cronise Jones came to public attention when she covered the special session of the Pennsylvania Legislature when her husband became too ill to fulfill his commitments. That same year, she was the only woman appointed to the Pennsylvania commission organizing exhibits for the 1893 World's Fair in Chicago and aided in creating the Girls Mutual Aid Society as the group's first recording secretary. Jones eventually joined a lengthy roster of civic clubs. Most notably, she helped found the Harrisburg Sunshine Club, which assisted the sight-impaired, and served as its vice-president in 1904. She was also active in the Pennsylvania Woman's Press Association, becoming its vice-president in 1906. Jones became the first woman president of the Pennsylvania Legislative Correspondents Association in 1919. Jones was elected President of the Harrisburg Civic Club in 1920. As an officer in many clubs, Jones also participated in the state Federation of Women's Clubs.

Mabel Cronise Jones was a prolific author as well as a journalist. She published many poems, short stories, novels, and works of non-fiction throughout her lifetime. Many of Jones's works appeared in the Presbyterian press, but she also wrote romances and potboilers. 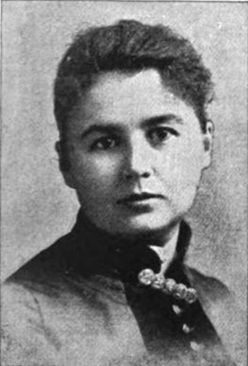 Although she ceased teaching, Cronise Jones remained an educator. She frequently offered literature courses at the Harrisburg YWCA. As a member of the D.A.R., Colonial Dames and Daughters of 1812, Cronise Jones delivered many original historical papers. In 1911 Cronise Jones stood for election as a school director but lost despite the backing of the Harrisburg Civic Club.

Jones appears to have become active in suffrage circles in 1910 when the Central Pennsylvania Woman Suffrage Association was founded. In 1911 she was elected its second vice-chairman. When Lavinia Dock moved to work at the national level in 1912, Jones rose to the presidency, a rank she held until the attainment of the nineteenth amendment. Cronise Jones often lectured suffrage organizations about current political events. She also embraced confrontational strategies in support of suffrage. A 1913 report on strategies Cronise Jones employed to distribute literature to anti-suffragists included crashing a public lecture by Helen Keller to take advantage of the captive audience. As "Reporter-For-A-Day" for a local newspaper, Cronise Jones relentlessly pursued Harrisburg's new City Commissioner and Republican leader, "Chiefy" Lynch, for an interview. As a reporter who "'lands' the story she is assigned to get," she pressured Lynch into joining her in an interview where he tried to escape - she claimed - three times and continued to question him, eventually exposing Lynch as an anti-suffragist. In 1917 Cronise Jones led the Central Pennsylvania Woman Suffrage Association. to formally affiliate with the National Woman's Party, which was working for a national suffrage amendment. Cronise Jones served as the chair of the 18th district responsible for pressuring local legislators to support the amendment. She organized a suffrage parade to coincide with the legislative session considering ratification of the suffrage amendment and was present in Harrisburg at its signing.

Jones died on July 13, 1921, and was buried in the Paxtang Cemetery in Harrisburg. Jones was lauded as "a pioneer in the cause of woman suffrage in central Pennsylvania," and the YWCA and the Civic Club passed resolutions of bereavement. In subsequent months, local organizations such as the D.A.R. and the Harrisburg Historical Society commemorated her many achievements. In 1923, the Keystone Chapter of the Daughters of 1812 established a one thousand dollar memorial scholarship in her name. 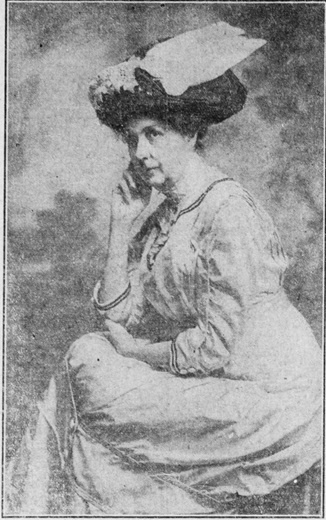 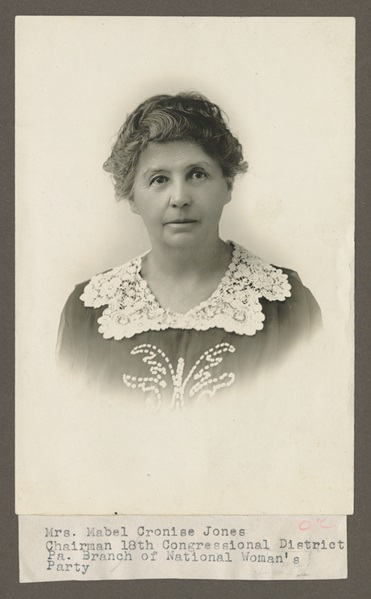 Photo Credit: from photos amassed by Caroline Katzenstein for Lifting the Curtain. http://www.inherownright.org/records/1757