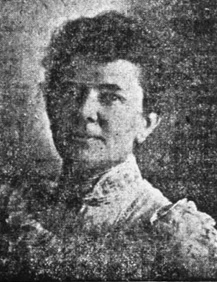 Alice Sarah Tyler was born in Decatur, Illinois on April 27, 1859 to pioneer Macon County, Illinois residents Rev. John William Tyler, founder of the Christian Church of Central Illinois, and his wife Sarah Roney Tyler. Alice Tyler was the youngest of eleven siblings and three step-siblings. American presidents John Tyler and James Monroe were among her ancestors. Because Rev. Tyler was frequently called away from home on church business, Sarah Tyler managed the family farm on her own.

After graduating from Decatur High School in 1877, Tyler became an apprentice at a small local library in Decatur managed by Richard L. and Alice G. Evans. She enjoyed the work, and, after the deaths of her parents, she decided to attend the Armour Institute of Technology in Chicago (later known as the Illinois Library School). She graduated in 1894 and obtained a library assistant position with Cleveland Public Library's Catalog Division in 1895, making her the first university-trained librarian of the Cleveland Public Library. She later moved to Iowa, where she served as secretary of the Iowa State Library Commission from 1900-1913, director of the Iowa Summer Library School at the State University of Iowa from 1901-1912, and served as the editor of the Iowa Library Quarterly from 1901-1913. According to one account, "Under Tyler's leadership, public libraries in Iowa flourished as she oversaw the education of librarians, the expansion of the traveling library system, and the increase of libraries from 41 to 113."

In both Iowa and Ohio, Tyler was a popular and frequent guest lecturer. Having worked in struggling libraries operating in crowded, rented buildings with inadequate support, she advocated for public library funding and mobile libraries She connected with several women's clubs in order to not only promote public libraries, but also to lobby politicians for tax dollars and legislative appropriations for library operations. Many women's clubs and organizations, including those promoting woman suffrage, met at local libraries, so it is no surprise that Tyler became an active member of suffrage organizations. She was likely active in suffrage work at least between 1912 and 1921. She served as president of the Women's Press and Authors' Club of Des Moines, a charter member of the Decatur Woman's Club, a charter member and president of the Women's City Club of Cleveland, and a member of the League of Women Voters and Citizen's League. She was also active in the Daughters of the American Revolution

Upon her retirement in the summer of 1929, Tyler was appointed Dean Emeritus of Western Reserve University, and a scholarship fund was established in her name. At the request of the American Library Association, she began writing a book about library science pedagogy. A life-long learner, she took courses in Greek civilization at Cleveland College in the 1930s.

Tyler never married and had no children; rather, she shared an apartment with longtime colleague Bessie Sargeant-Smith. After a year of declining health, Tyler died on April 18, 1944 and is buried in Greenwood Cemetery, Decatur, Illinois. A Decatur, Illinois Herald and Review tribute to her called her "a leader in her profession. To her is attributed a keen vision, wonderful executive ability, constant enthusiasm, and a magnetic personality which has made her friends everywhere she goes."