Edna Alice Andress was born in Ohio March 16, 1874 to George H. and Permelia (Hutchinson) Andress. Edna attended Ohio State University and was a graduate of the class of 1900. That same year, she married Julius F. Stone of Columbus, Ohio. After graduating, she maintained close ties to the University and participated in a variety of alumnae events, including a rally of women graduates of the University held in 1920. At this gathering of women graduates, Edna conducted a business conference where ideas "were discussed by means of which the alumnae of Ohio State might bring about more progressive plans for the campus." Her husband, a prominent Ohio industrialist and banker, served as a trustee of the University for 28 years, and deeded Gibraltar Island in Lake Erie to the University to be used as a biological laboratory. For many years they lived near the University in Grandview Heights, Ohio. They had five children born between 1901 and 1910, including two daughters and three sons.

In 1912, Ohio held a constitutional convention to revise the State constitution through amendments. Suffragists worked to ensure that women's suffrage was included in the proposed amendments to the State constitution. A special election was held September 3, 1912 to allow Ohio voters to decide which amendments would be approved. In the months leading up to the special election, suffragists conducted a campaign for the suffrage amendment. As part of this campaign, Edna served as chairman of the Ohio Centennial Woman Suffrage Parade Committee, helping to organize a parade of 5,000 people held in August in Columbus. Despite these efforts, Ohio voters rejected the suffrage amendment, with 249,420 ayes and 336,875 noes.

In 1913, Edna spoke at the Ohio Woman Suffrage Association (OWSA) annual convention. That year, a newspaper referred to her as one of the leading suffragists of Columbus, and quoted her saying, "If taxation without representation was tyranny in the Colonial days it is none the less true in the modern days when women seek the ballot and equal rights," and that "women own and manage real estate and business enterprises and yet are not considered wise enough to help elect Constables." In 1914, Edna was elected auditor at the OWSA annual convention, and represented the OWSA as part of a delegation that presented resolutions in favor of women's suffrage to the Republican State Central Committee in Columbus. Also that year, Edna gave a reception at her home for Dr. Harvey W. Wiley of Washington D.C. with members of the Men's League for Equal Suffrage and the Franklin County Equal Suffrage Association.

In 1917, Edna was again helping to organize a suffrage parade in Columbus, at which both the OWSA and Congressional Union members planned to march. Edna also served as chairman of the Train Committee for the Mississippi Valley Suffrage Conference held in Columbus in 1917. At that year's annual OWSA convention, Edna was recorded as participating in the discussions and presenting a report as part of the resolutions committee. In June 1919, Edna attended a luncheon in honor of Alice Paul held in Columbus. Later, Edna was affiliated with the Franklin County League of Women Voters, having hosted a party for the League at her home in 1926.

After her suffrage activism, Edna extolled the virtues of the home and women residing in the domestic sphere. In 1927, she was named by the governor of Ohio as a delegate to the American Homes National Congress at Des Moines, Iowa, held under the auspices of the General Federation of Women's Clubs (GFWC). The previous year, in discussing reasons why the Congress was needed, general chairman Mrs. John D. Sherman, then GFWC president, stated that the home as an institution was "facing the challenge of the age of science and democracy" with "widespread pessimism as to its stability and its effectiveness." The resulting Congress was organized with the goal of "improvement of the American home, the development of interest in the home, and every activity to raise the ideals and standards of the home." Later, in a 1935 interview, Edna was quoted as saying that for women "the pleasures to be derived in the home are the more mature and lasting ones." She went on to say regarding women's clubs that "for a period of eight years, let us say, a woman can give intensely to such causes" and that after that time "she should step aside to make room for younger women with new ideas."

For the last ten years of her life, Edna lived in Santa Monica, California. Her husband died in Santa Monica in 1947. In November 1949 she went back to Ohio to be with friends and family. She died at the University Hospital in Columbus on February 19, 1950. Her death certificate states that she was cremated, but her name is included on a family gravestone in Andress Cemetery on Gore Orphanage Rd in Henrietta, Ohio. 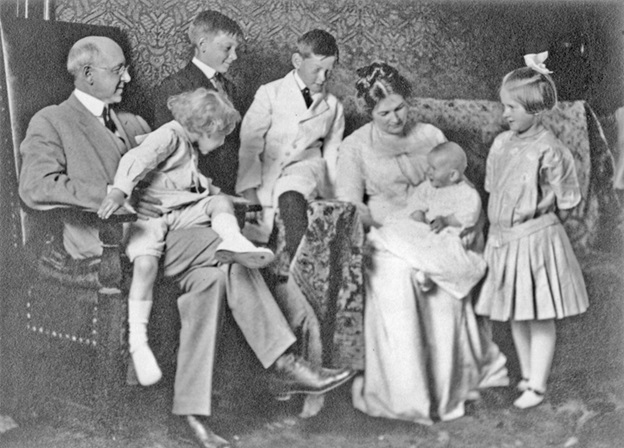