Mary Isla Blanche Hays, called Isla, was born April 07, 1867, in Pennsylvania to Captain James M Hays, a Civil War veteran, and Evalyn "Eva" Sheridan Hays. Hays graduated from St. Aloysius' Academy in Loretto, Pennsylvania, in 1887, where she distinguished herself "as a vocalist and elocutionist." She married Leonard Gillespie Woods on April 7, 1892. Woods, son of an Irish immigrant, became a prominent industrialist by building up a small manufacturing firm and patenting several inventions. The couple had one child, Elizabeth, known as Bessie.

In the 1890s, Mrs. Leonard Woods, as she was almost always called, began to appear in press coverage of philanthropic endeavors.* By 1903, society pages reported on the social engagements and travel plans of the Leonard Woodses, and by the 1910s, Woods was a leading society matron of Pittsburgh. Bessie Woods's wedding in 1914 was "one of the most brilliant and important events of the spring [social] season."

Woods's success as a society hostess perhaps led to the invitation to sponsor the Equal Franchise Federation of Pittsburgh's fundraising fete in June 1915. Her involvement with the organizing committee is the first mention of her in connection to the cause of votes for women. Woods became chair of the Dance Pavilion Committee, which hosted dancing contests, a cabaret, and suffrage skits. Woods was also in charge of taking reservations for tables in the dance pavilion, a prominent form of patronage. The event raised $5,000 for suffrage coffers, and Mrs. Woods won the raffle for a Pomeranian puppy. Woods does not seem to have had further involvement during the campaign for a state suffrage amendment in 1915. However, in 1916 Woods again aided in a social event for suffragists as one of the supporters of the Suffrage Shirtwaist Ball. The Equal Suffrage Association billed this event as the most democratic fete ever held in Pittsburgh. With tickets priced at just fifty cents, organizers hoped to attract working-class support for the cause.

The first world war galvanized Woods. In 1916 Woods lent her name to the war relief effort, raising funds for a "Pittsburgh Ambulance for the Allies," and in April 1917, she co-sponsored a dance to benefit the Pittsburgh Red Cross. In May 1917, Woods became a champion of the "war gardens," the efforts to enlist civilians in food production. Along with other prominent society women and suffragists, she appeared at the opening of public garden plots and staffed headquarters that distributed literature about home gardening. Woods also oversaw the sale of seeds and gardening implements to the public. Newspapers praised Woods, among "Pittsburgh's best-known women [who] have given remarkable service in the campaign" to encourage war gardens.

In June, the Food Conservation, Home Economics, and Thrift Department of the Council of National Defense appointed Woods the Director for Alleghany county. Woods turned decades of social contacts into an organizing network. As one newspaper noted, Woods brought together the Civic Club of Allegheny, South Hills Civic Club, Women's Club of Sewickley, and the Equal Franchise Federation.

Under Woods's auspices, 75,000 housewives signed the pledge to conserve food supplies. As part of this campaign, Woods traveled throughout the state to allay fears that the food conservation campaign would impinge on individual rights and liberties. Woods also oversaw used shoe collection, supervised visits of the food conservation train, and oversaw a model war kitchen for demonstrating food conservation practices. During a dispute over milk pricing, Woods revealed some of her political philosophies: "I am strongly in favor of a thorough investigation and a report to Federal powers." Woods also telegraphed Hoover directly when Pittsburgh faced a severe food crisis, with seventy-eight railroad cars of food said to be rotting. Woods then helped to create public "curb markets" to distribute "food at actual cost." In November of 1917, Woods resigned from her directorship, stating that "she had completed the preliminary work of organizing and developing a system of education in food conservation, and she now believes she is entitled to relief from her duties." However, she continued to work with the curb markets. 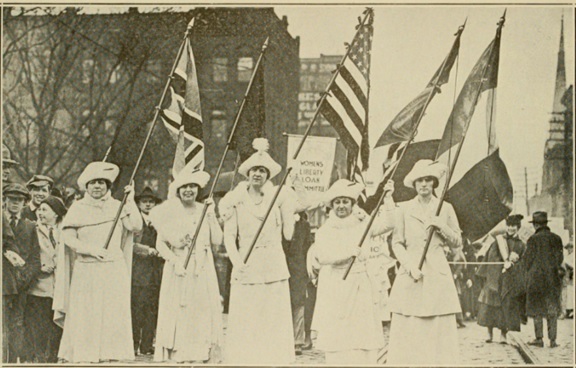 Woods next turned her considerable fundraising skills to selling Liberty Bonds. In December 1917, Woods accepted an appointment to the women's committee of the Western Pennsylvania Liberty Bond campaign and spoke at public sales. In September 1918, Woods assumed responsibility for the theater division of the Liberty Loan committee in Pittsburgh. Woods had responsibility for selecting, training, and assigning scores of speakers who solicited funds from theatrical audiences. Once that task was complete, Woods became vice-chair of the United War Workers Committee and throughout 1919 continued to organize events for local soldiers and participated in a victory ball. 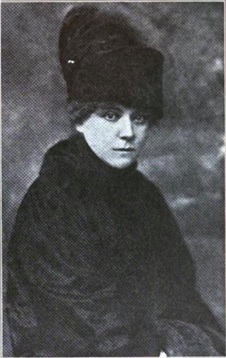 War work also turned Mrs. Woods into a more active supporter of woman suffrage. In November of 1917, for the first time, Woods attended the annual convention of the Pennsylvania Woman Suffrage Association, which was almost entirely consumed by discussing war efforts. Woods pledged funds to keep the Allegheny suffrage office open and donated $100 to the organization's general coffers. In January of 1918, Woods took a seat on the advisory committee of the Red Cross chapter organized by the Equal Franchise Federation of Pittsburgh. Woods organized a ball and outdoor fete in April of 1918 to benefit Women's Overseas Hospitals supported by NAWSA. The ball raised over $11,000, said to be the largest amount ever raised by a charity event in Pittsburgh. Woods' plans proved so successful that women throughout the country created similar events modeled after hers. The August 1918 issue of The Woman Citizen described Woods as "one of Pittsburgh's most active and capable suffragists."

In May of 1920, as the attainment of woman suffrage seemed likely, the state Republican Committee created a Women's Republican Committee, and Woods became director of the Allegheny chapter. Under Woods's direction, the organization educated and registered women voters. Woods's executive committee was racially integrated, an unusual fact in Pennsylvania where the PWSA organized black women separately. Mrs. Laura A. Brown of Gettysburg sat on the executive committee. After ratification of the nineteenth amendment, Woods devised a plan to ensure that the tax assessment required for voting in Pennsylvania occurred for all women. While the highest estimates of legible women voters in the county were around 40,000, 75000 were assessed, and 35,000 were immediately eligible to vote with no additional steps. 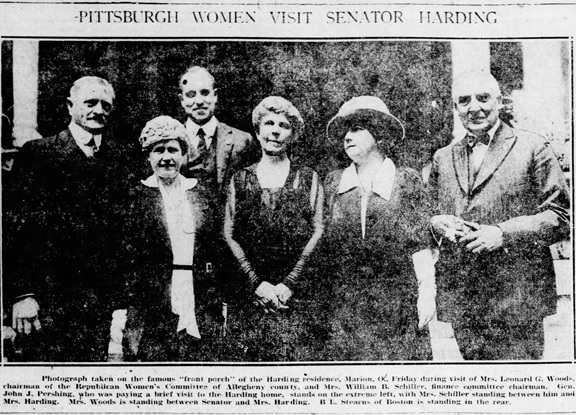 Woods also became an essential part of the local Republican Committee as she convinced women to "end Democratic party misrule" In September, she met with Harding and endorsed his candidacy. She traveled with state Republicans to hear Harding speak from his Ohio front porch and led the "three cheers for Harding." In October, Woods oversaw a one-thousand-woman contingent that marched in a parade preceding a Republican rally in Pittsburgh. 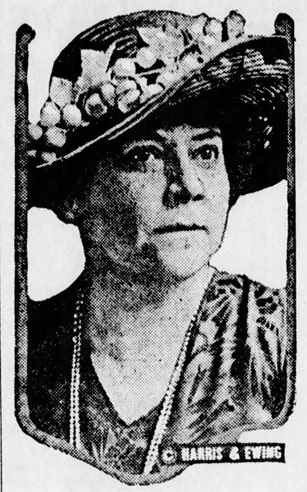 In 1921 Woods became first woman officer of the Republican National Committee's executive committee as the second vice-chairman. This position was created at the behest of women who urged that a woman be selected to fill it. Woods was their preferred candidate, and she was appointed by unanimous vote. Woods continued to work in Pennsylvania, encouraging women to register to vote for Republican candidates. "The welfare of our country, as well as the best interests of our party, demands that every Republican woman in Allegheny county be registered to vote." In January of 1922, Wood resigned her role as chair of the women's committee in Allegheny. "I have blazed the trail, and some other women can now take up the work." She retained her national office. In 1923, while in the capital for Republican National Committee meetings, Woods met with President Harding, cabinet officials, and other prominent politicians. However, while Woods occupied a seat on the rostrum, she did not play an active role in the proceedings, which annoyed some of the other women present. Henrietta Wells Livermore made a speech some audience members interpreted as critical of Woods. 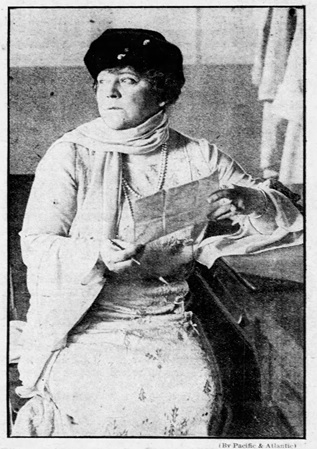 Following the 1924 convention, Woods's term expired, and she returned to the life of a society matron. Throughout the 1930s, newspapers continued to report on her appearances at charitable events and frequent travel, but no further mention of political participation appears. Woods seems to have retired from public life in the 1940s and died on December 11, 1950, at the home of her daughter. She was buried in Pittsburgh. Her obituary contained no mention of her involvement in politics, and funeral services were private.

* In her lifetime Woods was sometimes confused by the press as the wife of Major General Leonard G. Wood, Louise Adriana Condit Smith Wood.

"Commission Plans To Teach Gardening By Motion Pictures" The Pittsburgh Press May 16, 1917, 9.

"Thousands Pledged In The Local Movement To Conserve Food," The Pittsburgh Press July 13, 1917, 14.