Adella Emma Potter was born on July 8, 1876 in Brooklyn, New York to Eva A. Vaunt and Dr. Charles H. Potter. Her mother was a prominent clubwoman in Brooklyn. Adella's sister Eva Sherwood Potter was also a suffragist. Potter attended the Packer Collegiate Institute in Brooklyn. At her commencement in 1898 she authored a class history in the form of an epic poem. In 1902 Potter graduated as a member of the women's law class of New York University receiving a prize for her essay "The Immunity of Private Property from Belligerent Captive."

In the summer and fall of 1914, Adella Potter campaigned for the 1915 Pennsylvania suffrage referendum. Potter found herself far from the urban entertainments of Brooklyn addressing a Grange audience and participating in open air meetings in many small towns. According to a report from Bristol, Pennsylvania, Potter advanced many justifications for enfranchising women including "humanitarian, moral, and educational" grounds.

1915 found Potter back in Pennsylvania under the auspices of the First Division of the Woman Suffrage Party, urging all suffragists to pitch in during the battle for the referendum. She initially worked in Philadelphia and Bucks County addressing open air audiences from an automobile. She attempted to sway crowds by appealing to state pride and patriotism, while also stressing that modern technologies mean women no longer needed to labor in the home like their grandmothers and could therefore take up civic issues. By summer, Potter had moved on to organizing supporters in Lancaster and Luzerne counties speaking almost daily in churches, at Sunday School picnics, and again from the platform of an automobile to street crowds. In September of 1915 Potter joined the Justice Bell tour. She remained with the Bell until it reached Philadelphia in late October days before the failed referendum vote.

Undeterred, Potter continue to push for woman suffrage. After only a few months back home in Brooklyn, her oratorical skills were needed in West Virginia, where she once again threw herself into a state campaign. From April through August, Potter travelled throughout the state giving speeches in support of the suffrage amendment and aiding local organizing efforts. Newspaper reports indicate she drew on speeches first given in Pennsylvania, emphasizing that while women's grandmothers might have needed to toil endlessly in the home, modern conveniences gave women of the day sufficient time to participate in civic life.

With two failed referendum campaigns behind her, Potter turned her sights back home. In 1917 she headed up the Church Section of the Woman Suffrage Party. After the US entered the first world war, Potter combined suffrage activism with war work. In July, she founded the White Cross movement, which used the suffrage movement network to organize wholesome home-based hospitality for stateside soldiers during their off-duty hours. Potter viewed this as a patriotic and an even greater moral service to the country. She explained "As the men are helping to guard our country from danger, so the women must help guard the men from even greater dangers - temptations that will make them lose their ideals of womanhood."

In November, weeks after New York passed a state suffrage amendment, Potter began working for the Anti-Saloon League to develop support for prohibition among the women voters. After passage of the eighteenth-amendment, Potter took up a new role for the Citizens League, dedicated to ensuring enforcement of prohibition. In that role, Potter organize The Allied Citizens League, which used pledge cards to enlist individuals to support enforcement of Prohibition. In 1919 Potter unsuccessfully sought to block the election of Reuben L Haskell, a judicial candidate she believed liquor interests supported.

In 1922, while managing Anne Morgan's philanthropic tour of the southwest to raise funds for victims of the Spanish Civil War, Potter married William M Potter (no relation) also of New York. After her marriage Potter remained active in the Civitas Club of Brooklyn. In the 1930s, the Potters relocated to New Jersey where she became President of the Asbury Park Women's Civic Club, urging members among other things to support the Pure Food Bill, and becoming active in the League of Women Voters.

Potter remained interested in politics until the end of her life. In 1962, she authored a letter to the editor of the Orlando Sentinel protesting against obscenity and advocating for school prayer. Adella Potter died in Florida in October of 1966 and was buried in Mahwah, Bergen County, New Jersey. 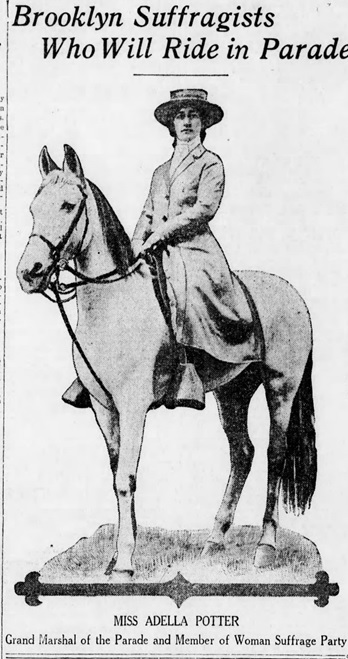 Photo from "Brooklyn Suffragists Who Will Ride in Parade, Brooklyn Daily Eagle, Oct 25, 1913, 22.