Edith Lawrence Black was born on March 15, 1869 to Charles Newbold Black and Mary Keese Lawrence Black, the third of six children. She married Dr. Pearce Bailey on November 11, 1899 at her mother's summer house in Jobstown, New Jersey. Dr. Bailey was a renowned psychiatrist, physician, and soldier during World War I. They had four children. An avid writer and poet, Edith published many of her articles and speeches in the North Westchester Times.

Edith Bailey seems to have taken her first step into the women's suffrage movement during a trip to England. She witnessed the activism of the English women on January 21, 1910 and wrote about her experience in a newspaper article. She said "Once sow the seed of moral responsibility, and there will be no rest for womanhood till the question is fleshed out." Bailey became an avid member of the Equal Franchise Society and often spoke at conferences and assemblies on its behalf. Her audiences appreciated her accomplished oratory.

After her return to the United States, Bailey held a gathering in her own home to promote women's suffrage. At this gathering Harriot Stanton Blatch also advocated for suffrage. During her speech, she said, "It is not the tyranny of men that keeps women from the ballot: it is women's own indifference and shortsightedness. Man, I think, has always subconsciously believed in it." She also partook in a debate on how to convert anti-suffragists into suffragists. Her belief was that the only way to change a person's view on women's suffrage was to convince them when they were young. She then held her own against a religious argument, calling the pope an "old bachelor."

Edith Lawrence Bailey Black continued to be involved with the women's suffrage movement right up to the end of her life. Throughout her life, Bailey suffered from diabetes and knew that it would cause her death. She died peacefully in her sleep on September 7, 1912 at her home on a hill above the town of Cross River. Her home, named Four Winds after a Bible verse, became a hospital after 1910. She is buried at Reynolds Cemetery in Cross River, NY. A small memorial was erected by her husband, Pearce Bailey, at an intersection of roads near their town. 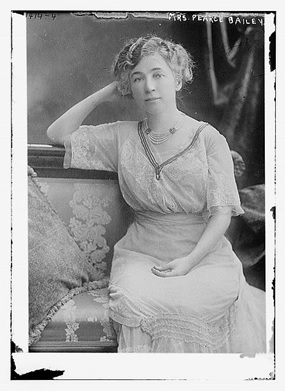 Mrs. Pearce Bailey, accessed from the Library of Congress website at http://www.loc.gov/pictures/resource/ggbain.07842/