Lulu B. Gleason, nee Thomas, was born in 1864 in Butler, Indiana, to William and Sarah M. Thomas. As a proprietor, she made women's hats until she married Albion (Frank) Gleason in Bryan, Ohio, on January 11, 1885. They had one daughter, Frances E. Gleason (later McFadden), who was born in 1899. Lulu Thomas Gleason died in 1953, after living her last years in Royal Oaks, Michigan, with her daughter. She was buried in Fountain Grove Cemetery in Bryan, Ohio.

Gleason lived most of her life in Lucas County, Ohio. She was a leader in the Woman's Christian Temperance Union (WCTU), an organization founded in Cleveland, Ohio in 1877 to moderate health and social problems related to alcohol abuse. The grassroots organization model of the WCTU facilitated female involvement in politics and provided a base of support for Gleason's future political campaign. Gleason served as the Lucas County Chairwoman of the WCTU for thirteen years and travelled around the state, giving addresses to other local chapters. As a lecturer, she emphasized the importance of the WCTU as a social and religious organization, and she highlighted the need for women to actively petition their legislators. She co-founded the Anti-Cigarette League of Ohio in 1919 to combat smoking. In 1920, Ohio Governor James Cox appointed Gleason as a delegate to the International Congress against Alcoholism in Washington, D.C. Gleason served as a member of several organizations in Toledo, including the League of Women Voters and Toledo Women's Club.

Before launching her own political campaign, Gleason worked with lawmakers at the Ohio Statehouse to draft pro-temperance legislation in her capacity as Legislative Superintendent of the national WCTU. Gleason co-wrote Ohio House Bill 233, which instituted an annual temperance day program in Ohio's public schools. This bill was sponsored by Republican Representative John W. Gorrell.

On November 7, 1922, Gleason was elected to the Ohio House of Representatives. Her campaign was run entirely by women, many of whom Gleason had worked with in the WCTU. Only two years after the ratification of the 19th Amendment, securing women the right to vote, women were on the ballot in 49 Ohio counties. Gleason was a member of the first class of women elected to the Ohio House, along with Nettie McKenzie Clapp of Cuyahoga County, Adelaide Sterling Ott of Mahoning County, and May Martin Van Wye of Hamilton County.

While in the House, Gleason served as the Chair of the House Committee on Temperance. She was also a member of the Schools Committee and the Benevolent and Penal Institutions Committee. Gleason struggled with health issues throughout her term, missing her own inauguration and taking her seat in the House late. In 1923, Gleason was appointed by Governor Donahey as a delegate to the annual convention of the Anti-Saloon-League of America in Birmingham, Alabama. Gleason served a single two-year term, from 1922-1924.

"Defenbaugh Has Been Selected as Delegate," Lancaster Eagle-Gazette, 20 September 1920, p.7. 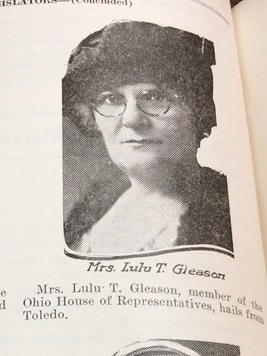