Ackerman lived most of her life in Ainsworth, Nebraska. She was active in many organizations including the Woman's Relief Corps, Ainsworth Woman's Club, Five Hundred Club, P.E.O, the Ainsworth Library Board and the Ainsworth School Board. She held offices in the local, state and national chapters of the Woman's Relief Corps (WRC), serving as president of the Nebraska Women's Relief Corps in 1912 and on the national executive board in 1913. In the WRC she was noted for her support of woman suffrage. The Woman Citizen remarked, "The Women's Relief Corps of Nebraska also looks to a member of the suffrage board, Mrs. E. Ackerman, for one of its most ardent workers."

Ackerman was an active presence for the suffrage movement in Nebraska. She became involved in local suffrage organizations around 1910 when the Brown County Democrat reported that she hosted a meeting of the "newly organized" Woman's Suffrage League where she was elected the secretary and treasurer. Ackerman would regularly host suffrage meetings where she would often present reports of events happening within the state suffrage movement. In 1914, Ackerman served as a secretary for a campaign to secure signatures on a petition for a referendum allowing for woman suffrage in the November 1914 election. While the referendum was defeated overall, the electorate of Brown County voted in favor of suffrage by 59%. By 1916, Ackerman's involvement with suffrage work extended beyond Ainsworth: she was the chairman of the Brown County suffrage league where she would speak and attend rallies throughout the county. In addition, Ackerman was appointed as a local delegate to the Nebraska Woman Suffrage Association convention held in Hastings, Nebraska, where Carrie Chapman Catt was the featured guest speaker. Ackerman was on the executive board and served as the second auditor of the state suffrage organization, the Nebraska Woman Suffrage Association.

In 1917, a legislative act granted Nebraska woman partial suffrage, giving women the right to vote in presidential and municipal elections. However, the Nebraska Association Opposed to Woman Suffrage filed a petition later that same year seeking a referendum vote in the November 1918 election, temporarily blocking the new suffrage legislation. After investigating the petition, Nebraska suffragists concluded that many of the signatures were fraudulent. In 1918, the executive board of the Nebraska Woman Suffrage Association filed a counter suit claiming that the anti-suffrage petition was not valid because many of the signatures weren't legal; all nineteen executive board members of the Nebraska Woman Suffrage Association, including Ackerman, were plaintiffs in the suit of Barkley v Pool. In 1919, the Nebraska State Supreme Court ruled in favor of the suffragists and in a special session that same year, the Nebraska legislature unanimously voted to ratify the 19th Amendment.

After winning suffrage, Ackerman's work continued; she chaired a temporary organization to form, when fully organized, a local League of Women Voters chapter. In the 1930s, she moved to San Francisco. James, her husband, died on March 21, 1939. Ellen Ackerman died on November 29, 1952 after sustaining a fall in the Garden Nursing Home where she had been a resident since 1948. She was 84 years old.

The Ainsworth Star Journal and Brown County Democrat were accessed through:
http://ainsworthbrowncounty.advantage-preservation.com/advancesearch

Hickman, Laura McKee. Thou Shalt Not Vote: the Struggle for Woman's Suffrage in Nebraska, 1997. University of Nebraska at Omaha, PhD dissertation.
https://digitalcommons.unomaha.edu/cgi/viewcontent.cgi?article=3231&context=studentwork 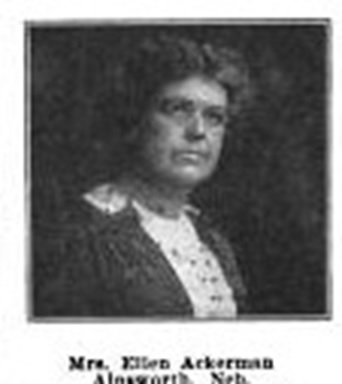