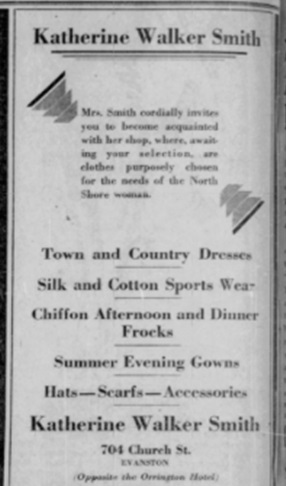 Katherine Abigail Walker was born in Versailles, Missouri on August 26, 1881. Her parents were Robert Franklin Walker, an attorney who eventually became a judge and chief Missouri Supreme Court justice, and Nannie Wright Walker. She had one brother, Leland. Her mother died from consumption at the age of thirty-nine in 1892, and her father later married Geneva Percy.

Katherine married Felix Koerner Smith of Chicago, who worked as an agent with the Santa Fe Railroad, in January of 1905. Felix's father was a Union Brigadier General during the Civil War and served as Illinois state treasurer from 1867-1869. Katherine and Felix lived in Clayton, a suburb of St. Louis, and had a daughter, Katherine, born in 1907, and a son, Robert Franklin Walker, born in 1908.

In January of 1913, Katherine went to the Missouri state capitol along with a Clayton Equal Suffrage Club delegation to lobby for a suffrage amendment to be added to the 1914 Missouri ballot. The next month, she was one of the citizens who spoke before a hearing of the state Joint Committee on Constitutional Amendments. Although the measure was placed on the ballot, it was ultimately defeated. Later in 1914, Katherine was elected corresponding secretary of the Missouri Equal Suffrage League at the organization's state conference. In 1917 she lobbied the State Legislature on behalf of a bill for Presidential suffrage. The bill was passed by the House, but was defeated in the Senate.

In August of 1918, Felix Smith died at the age of forty-one, following complications from an appendectomy. Katherine was left with two young children and Felix's fledgling refrigerator factory, which was struggling in the midst of World War I. According to a newspaper account, "she sold the factory for what she could get. Her situation had made her think in business terms and consider seriously what business ability she had. That ability seemed to lie in selling, although selling the idea that woman suffrage would not destroy the universe to conservative Missouri voters measured the extent of her contact with the public." Katherine decided to move to Evanston, Illinois, home of Northwestern University, and open a ladies' clothing store, a "dainty gray-painted shop bearing in tiny gold letters on the window, 'Katherine Walker Smith.'" Her shop became quite successful, and she operated it until 1948.

Katherine Walker Smith died in Evanston, Illinois on August 19, 1971 and is buried with her husband in Graceland Cemetery in Chicago.