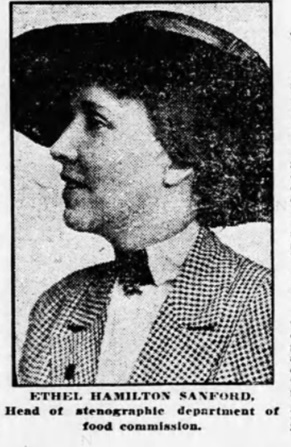 Alice Ethel Hamilton was born in England around 1877. Her parents were Laura Maria Leech Hamilton, a native of Memphis, Tennessee of English descent who had lived in Lancashire, England as a student, and George Edwin Hamilton. The Hamiltons were married in St. Louis in 1874. However, in 1876, Laura filed for divorce; she alleged that George had subjected her to personal indignities, neglect, and worst of all, that he was already married under the name George A. Dickey to Mary Messer Dickey of New Hampshire, who was still living; the name George Edwin Hamilton was a false name.

Ethel, as she was called, grew up in St. Louis, with her mother, who after her divorce ran a boarding house. Ethel enjoyed participating in theater productions and attended at least two years of college before she married Robert Louville Sanford in Little Rock, Arkansas on June 4, 1909. The couple first lived in Joplin, Missouri, where Robert worked as a salesman, before they returned to St. Louis. There, they lived with Robert's parents, John and Augusta Sanford. Ethel's husband worked as an assistant manager of Syndicate Trust and Century Building Company.

Ethel was a major driving force in the suffrage movement in St. Louis. She served as the business manager for the 1913-1914 Missouri suffrage campaign. She was in the delegation that greeted Dr. Anna Shaw on her visit to Missouri in October of 1914. In November of that year, she joined other St. Louis suffragists working the polls to influence the election, which included on the ballot Missouri Issue 13, a woman suffrage amendment. Marguerite Martyn published a narrative of the suffragists' election day experience in The St. Louis Post-Dispatch; she recounted that the women arrived at the polls at 5:00 am: "They stood at the 100-foot limit, armed with literature, buttons, badges, and sweet smiles, and it was only the rarest voter hurrying on his way who did not accept the proffered 'arguments' with equally cordial smiles and many times a hand-grasp and 'best wishes.'" The amendment was ultimately defeated, but according to Martyn, the poll-workers declared that "the day's experiences in giving them an inside view of practical politics had been worth more to them than all they had learned of campaigning during all the weeks before."

In the winter of 1915-1916, Ethel "traveled all over Texas in a bright yellow automobile preaching the gospel of 'votes for women.'" One of her stops was in San Antonio, where she met with the San Antonio Equal Franchise Society. Local San Antonio newspapers called her visit a "suffrage invasion."

Ethel was one of several women who worked the polls in the 1918 primary election. She was stationed in the city of Kirkwood, Missouri. In 1919, she organized a Citizenship School for "newly enfranchised women" (but also open to men) in St. Louis as a joint operation between the Missouri Woman Suffrage Association and the St. Louis County Equal Suffrage League

In September of 1920, The St. Louis Dispatch published a piece commemorating three generations of women in Ethel's family who registered to vote: the first generation was her maternal grandmother, Rebecca P. Leech, who was then eighty-six years old; the second generation was her mother and aunt, Laura M. Hamilton and Mrs. Albert M. (Mary Alice) Wood, and the third generation consisted of Ethel, along with her cousins Moselle Wood and Mrs. George (Mabel Lois Wood) Furfe.

In addition to her suffrage activism, Ethel worked as the outdoor properties manager for the 1914 Pageant and Mask of St. Louis, a celebration which commemorated the 150th anniversary of the city and employed over 7,000 performers. An audience of over 75,000 attended the event on opening night. She was selected in 1917 by President Hoover's food administration chief, Dr. Ray Lyman Wilbur, to organize a stenographic force for the Food Conservation Office in Washington, D.C. Wilbur was especially impressed by Ethel's correspondence work during the 1914 Missouri suffrage campaign. The goal of the Food Conservation Office was to save $2 million worth of food in one year to help feed the allied forces during World War I. She was responsible for managing the newsletter service and bulletins issued by the office.

Ethel had no children and no siblings. By 1935, she was separated from her husband and living in Los Angeles, where her mother had moved some years before. In California, Ethel worked as head of the Occupational Therapy Department at the Veterans Administration Hospital and lived with her mother until her mother's death in 1945. As late as 1949, Ethel was still giving club talks and craft demonstrations with women's organizations in California. However, after 1949, Ethel drops off all American voter registration lists and city directories, and no obituaries listing her name are available.