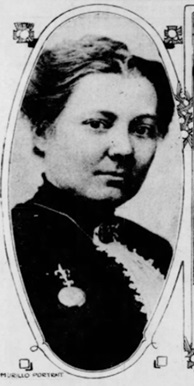 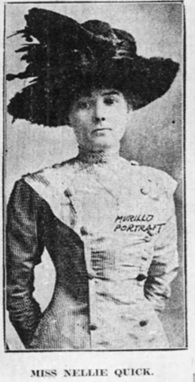 Nellie Ann Quick was the oldest child born to Henry J. and Etta Trotter Quick in Shipman, Illinois in 1879. In the early 1890s, the family moved to St. Louis, Missouri, where Henry Quick worked as a sawyer. Her siblings included sisters Lola, Myra, Madeline, Myrtle and brother William.

Nellie never married nor had children, but she devoted herself to bettering the lives of working women in Missouri. She was a longtime member of the St. Louis Women's Trade Union League (WTUL). Established around 1909, the organization boasted a membership of nearly 2,500 women by 1913 and included representatives from the Bindery Workers, the Garment Workers, the International Ladies Garment Workers, the Typographical Union, the Shoe Workers, Waitresses, and Press Feedworkers unions. The WTUL was lauded nationwide for its organization and efficiency, and it became a powerful lobbying force in Missouri politics. Nellie was a member of the Bindery Workers Union, St. Louis's first women's trade union, which consisted of women who worked in bookbinding and publishing. The labor unions' interests and the cause of woman suffrage went hand-in-hand.

The 1910 Census finds Nellie living with her parents and working as a bookkeeper in a dry-goods store. That year, Nellie was a speaker at the Executive Committee of the Women's Trade Union League banquet. The topic of the banquet was suffrage, and Nellie delivered an address linking suffrage to the mission of the Bindery Workers' Union. That year, she served as the Bindery Women's Union secretary and organized a joint campaign with St. Louis suffrage organizations, which included rallies, door-to-door canvassing, and picketing, to defeat E. J. Troy, a candidate for state legislature. Newspaper accounts called the campaign "aggressive and unrelenting"; one writer remarked, "The women's trade unions of St. Louis are becoming a factor to be reckoned with in political balloting. ... It is the boast of the women who engaged in this political skirmish that while their contingent literally swamped the polls throughout the turbulent siege of election day, not one of them experienced the slightest indignities or disagreeable treatment, which they point to as discounting what they term a 'popular superstition' that the polls are unfit for the presence of women."

In 1911, Nellie was elected Second Vice-President of the International Brotherhood of Bookbinders. She aided in a WTUL fundraiser to send food, money, and clothes to striking Pennsylvania coal workers. Nellie also helped organize a suffrage league for members of the St. Louis WTUL.

In 1912, Missouri Governor Hadley appointed Nellie to attend the Southern Conference on Women and Child Labor held in Chattanooga. Later that year, Nellie was elected the St. Louis WTUL secretary/treasurer and published a series of pieces in The St. Louis Star and Times. In them, she enumerated the reasons that working women should join labor unions and discussed the need for improved child labor laws in Missouri. She argued that the average working woman's wage, $6 per week, was unlivable and argued for better pay, shorter hours, and more sanitary working conditions.

State Senator Wilson of the Women's Wage Investigating Committee accused Nellie, along with Mary Bulkley and Sarah Spraggon, of "sowing the seed of discord among girls to prevent them from doing domestic work in homes and to encourage them in seeking employment at poor wages in factories and stores" in May of 1913. Senator Wilson called the women to a public hearing, where Nellie declared that she "would not encourage women to work as domestics in homes until their work was standardized and their social position bettered." At one point during the hearing, Nellie responded to one of Senator Wilson's questions sharply, "Please don't talk domestic service to me. It gets on my nerves."

That same year, Nellie helped over 500 female Bell telephone operators form a sublocal chapter of the International Brotherhood of Electrical Workers. Their goal was to negotiate for higher pay. When union members and company executives could not come to an agreement, the women went on strike; Nellie served as the organization's temporary secretary during the strike and relayed updates to local newspapers.

State labor commissioner John T. Fitzpatrick appointed Nellie to head a new state organization, the Woman's Bureau, in August of 1913. The bureau's goal was "to investigate and keep track of women's wages and conditions in St. Louis and elsewhere."

By 1914, Nellie was working for the State Free Employment Bureau, an organization which helped find work and housing for unemployed women. That year, Nellie also helped arrange a "Suffrage Excursion" event held on the steamship Belle of the Bends. The excursion featured suffrage speeches and a suffrage play. In 1915, she went with a delegation to the state capital to appear at a legislative hearing on the resolution of submitting a suffrage amendment to the Missouri ballot in the 1916 election, after a suffrage amendment failed in Missouri in 1914.

Nellie volunteered with a 1914 St. Louis Equal Suffrage Society membership drive. Soon after, she was hired as one of St. Louis's first policewomen. After witnessing how many young female offenders, many of them prostitutes, were habitual offenders, and realizing that the city had no formal probation officers, she petitioned the Board of Police Commissioners to allow her to serve as a probation officer for all female offenders. She promised that if she were allowed to act as probation officer, she would "inquire into [the offenders'] home life, to place them at work or return them to their parents. 'This will keep girls from going from court straight back to improper hotels or worse.'" By 1918, she was promoted to Matron of the parole office, and in 1920, she was appointed the second female Deputy Sheriff in St. Louis. Her duties included accompanying female offenders to and from the penitentiary as well as serving as bailiff for Judge Miller, calling and keeping order and calling witnesses in court.

Later in her life, Nellie lived in St. Louis with her younger sister Madeline. She died in St. Louis on January 5, 1967 and is buried in Memorial Park Cemetery.