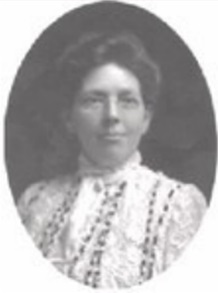 Florence Belle Swickard was born in Franklin, Ohio on October 12, 1857. Her parents were Henry Swickard, a wheelwright and carpenter, and Sarah Ann Langham Swickard. Her siblings included Amelia Gertrude, William Ellsworth, Charles Robert, and Daisy Josephine. At the close of the Civil War, the Swickards moved to Columbus, Ohio, where Belle, as she was known, graduated high school. After working as a teacher for approximately four years, Belle enrolled at Ohio State University, where she majored in Latin and Greek, served as an editor for the campus newspaper, The Lantern, and worked as assistant librarian and a teaching assistant for freshman and sophomore Greek courses.

Belle was a suffrage activist by 1911, when she was elected President of the Detroit Equal Suffrage Club and joined suffragists from all over the state who picketed the state capitol building in Lansing. In February 1912, she published a scathing response to a male professor's critical essay regarding woman suffrage in the Detroit Free Press. In part, she wrote, "From the day that [a] young man goes to the city hall to get a license to wed until the end, when a permit is obtained for his burial, the shadow of the city hall looms large, portentous and intimate over the domestic home. There is decided countless questions bearing on the moral, physical, and financial welfare of the family--pure water, pure milk, wholesome food, pure air, cleanliness of streets and alleys; disposal of garbage ... protection against fire; sanitary conditions of labor; control of public parks, playgrounds, and streets; regulation of theaters, moving picture shows, saloons, houses of prostitution; conduct of public schools and libraries; granting of franchises to gas, street car, water, telephone, and electric light companies. Is there one of these departments of municipal housekeeping which the mother of a family, the teacher (nine-tenths of whom are women), the factory girl (six millions in this country, the social service worker (three-fourths of whom are women), are not even more vitally interested than men? Surely public housekeeping is only private housekeeping writ large. Women, the majority of them, are asking the ballot that they may perform the duties that they owe their home, their families."

Belle was elected president of the Detroit Equal Suffrage Club in 1913, served as chairman of the Michigan Federation of Women's Clubs legislative committee in 1914, and was elected president of the Michigan Equal Suffrage Association in 1918. At the state annual suffrage convention in March of that year, Belle was appointed a congressional district chairman. As part of her duties, she helped organize a fundraising drive, membership drive, and a signature drive for petitions. According to The History of Woman Suffrage, vol. 6, Belle's "faith, devotion and work extended through three campaigns and she was one of those who could remain steadfast through the sowing until the reaping time."

At the April 1919 meeting of the State Equal Suffrage Association in Grand Rapids, Belle was elected chairman of the organization (newly dubbed the State League of Women Voters). In The History of Woman Suffrage, Ida Husted Harper gave Belle special recognition and thanks for helping her chronicle the woman suffrage movement in Michigan. In a 1922 meeting of the Michigan Pioneer and Historical Society, Belle presented a history of woman suffrage in the state.

In 1930, Belle was named to the National League of Women Voters Roll of Honor and was later recognized by the organization as one of thirty-one "American women who had done the most to advance the suffrage cause."

In her later years, Belle enjoyed traveling to the western United States, including Washington and California. She died on January 18, 1934 in Detroit, Michigan and is buried in Woodlawn Cemetery in Detroit.

Eleventh Annual Report of the Board of Trustees of the Ohio State University. Columbus: G.J. Brand and Co., 1882. https://books.google.com/books?id=l4_OAAAAMAAJ&pg=PA4&lpg=PA4&dq=belle+swickard+ohio+state+university&source=bl&ots=QkLcjKMJc2&sig=ACfU3U0XFA0ggICOAcnbUSY9QIwKfTGijg&hl=en&sa=X&ved=2ahUKEwi-uIzUpdHwAhUVV80KHW8KA08Q6AEwEHoECBMQAw#v=onepage&q=belle%20swickard%20ohio%20state%20university&f=false