By Jamie Eiermann, University of Missouri

Madeleine Mollineaux Liggett Clarke was born in 1882 in Marysville, Ohio to Mathilda Brown and William Madison Liggett. She had two brothers and one sister. She married Frederic Blaine Clarke on February 14, 1910. There is no record of any children from this marriage. After Frederic died on October 4, 1932 in Michigan, Madeleine never remarried. She died on May 10, 1946, in St. Louis, Missouri, at the age of 63.

Although born in Ohio, Madeleine Liggett spent much of her life in Minnesota residing in St. Paul and Minneapolis. She invested much of her energy into theatre, specifically as a member of the Ferris Stock company. She was regarded in her Minneapolis community as a "young society lady" with a brilliant stage presence. She attended the University of Minnesota where she was a member of the Dramatics club and her father was the dean of the agricultural college.

Prior to making their home in St. Louis in 1918, Madeleine and Frederic lived in Indiana for eight years where Frederic worked in the insurance business. It was in Indiana that Madeleine became active in suffrage work. She continued her suffrage work in St. Louis serving in the roles of extension secretary and executive secretary for the St. Louis Equal Suffrage League. These roles highlighted her "organizing ability, eloquence as a speaker, and skill as a publicity woman."

After passage of the suffrage bill, the State Board of the Missouri Woman Suffrage Association decided that citizenship schools would be the method of educating newly enfranchised women voters and the slogan "Every Missouri Woman an Intelligent Voter in 1920" was adopted. These schools aimed to promote intellectual pluralism among women and educate them on governmental operations and civic duties. Madeleine conducted all St. Louis Citizenship schools and wrote about this experience in an essay titled "Carry On, St. Louis." Madeleine's essay is an overview of how citizenship schools were organized and conducted. Through these schools, Madeleine hoped to create a "well-rounded woman" intellectually capable of helping women's progress.

In the final year of her life, Madeleine spent 7 months in the City Infirmary being treated for senile psychosis. On May 10, 1946, she suffered a cerebral hemorrhage at 5 AM. She was buried back in St. Paul, Minnesota.

An article in November 15, 1902 Minneapolis journal describes Madeleine's work as an actress. Her suffrage work, including her essay "Carry On, St. Louis," is documented in Volume 14, Issue 3-4 of the Missouri Historical Review (1920). 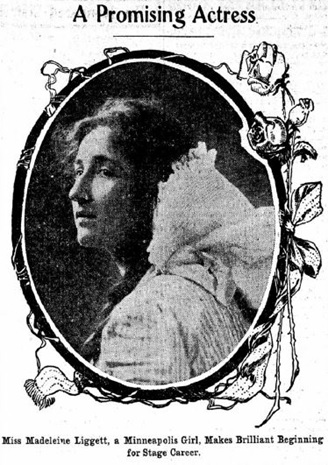