Blanche Moore was born in Mill Creek Hundred, New Castle County, Delaware, on December 21, 1865, to Dr. George Roberts Moore and Ann Eliza (Carter) Moore. When she was one, her family moved to McDonaugh County, Illinois; her mother died there before Blanche had reached the age of four. Despite her father remarrying two more times, she remained an only child.

The first school Blanche attended was a prairie dugout in Nebraska. When she was seven, her family returned to Illinois, where she was at first educated in private schools and by tutors. Later she began attending the public schools of Mt. Carroll, Illinois. In 1882, she graduated from Mt. Carroll High School as valedictorian. Four years later, she received her M.D. degree from the Woman's Hospital Medical College of Chicago (Northwestern University). Her internship had been at the Women's and Children's Hospital of Chicago; she also completed post-graduate work in New York and Philadelphia. In 1889, she was an attending physician at Tabernacle Dispensary in Denver, Colorado.

On May 15, 1890, Blanche married Dr. Thomas J. Haines. He had graduated from the College of Physicians and Surgeons of Chicago (Illinois) University in 1888. He began practicing medicine in Three Rivers, Michigan, in 1890. After their marriage, Dr. Blanche M. Haines joined him, and they both practiced medicine in Three Rivers and operated an office together.

Blanche's work as a suffragist began early when she was the first woman elected to the Three Rivers Board of Education in 1899. She served as Secretary for the Board for one term, ending in 1902. In 1908, when women petitioned the Michigan Constitutional Convention to include full suffrage for women in the new state constitution, Dr. Blanche M. Haines was one of the women who spoke before the convention in favor of suffrage. Full suffrage was denied. In 1912, when an amendment for suffrage would be on the ballot in the November election, the St. Joseph County Equal Suffrage Association was organized, with Dr. Blanche M. Haines serving as County Chairman. The measure was defeated. In 1914, Dr. Blanche M. Haines became Chairman of the Third and Fourth Congressional Districts, which consisted of eleven counties in southwest Michigan. By 1915, she was also serving as the State Legislative Chairman, making an effort to secure presidential suffrage. The bill she supported was originally declared unconstitutional, but it later passed the Michigan Legislature in 1917. With the new constitutional amendment again on the ballot in November 1918, a concerted statewide campaign began. Local officers financed their own activities, and Dr. Blanche M. Haines personally offered $7,600 for the Third and Fourth Congressional Districts. The amendment passed, guaranteeing Michigan women full suffrage. Later, in 1920, when Carrie Chapman Catt, issued a call to members of the executive council to convene in Washington, D.C., to officially dissolve the National American Woman Suffrage Association, Dr. Blanche M. Haines was one of two Michigan members to attend.

For three years, from 1922 to 1925, Dr. Blanche M. Haines worked for the Michigan Department of Health as the Director of the Bureau of Child Hygiene and Public Health Nursing. Then in 1925, she was appointed as Director of the Maternity and Infancy Division of the Children's Bureau for the U.S. Department of Labor in Washington, D.C. In July 1932, she resigned from that role and returned to Three Rivers, Michigan, where she remained (as she had since first living there) extremely active in civic and community affairs. In addition to her membership in local, state, and national medical societies, she was a member of the Daughters of the American Revolution (serving as Regent of the Abiel Fellows Chapter 1914-1916), the Three Rivers Woman's Club (serving as its fifth president, 1903-1904), and many other organizations. Her philanthropic gestures were common. After her husband died in 1940, she donated eighty acres for the development of an airport in his name. She later donated an additional $8,000 toward what would become the Dr. Haines Airport. She and her husband never had any children. Dr. Blanche Moore Haines died on November 9, 1944. 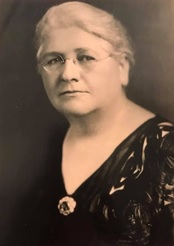