Violet Kauffman was born December 12, 1882 in St. Louis, Missouri to John Wesley and Sarah Ellen (Bronson) Kauffman. Violet was the oldest daughter of four children: Burt born in 1872, Harold born in 1874, and Margaret born in 1889. Violet's father founded Kauffman Milling, a huge flour milling and grain marketing company in St. Louis, and served as president of the Merchants' Exchange of St. Louis. In 1880, John built a 45-room Victorian mansion at Lindell and Kingshighway that became the Chase Park Plaza Hotel. Violet was a debutante who participated in theater and dramatics, studied abroad, and graduated with high honors from Vassar in 1903. She served as president of the St. Louis branch of the Association of Collegiate Alumnae and was an honorary member of Phi Beta Kappa. Violet married Leslie Helfenstein Thompson in October 1907. They had two children, Braxton (b. 1917) and Joyce (b. 1919).

Violet was a club woman and was regularly active in the St. Louis community. Her suffrage activity began to be documented in St. Louis newspapers beginning in 1910. In April 1910, Violet attended a meeting to organize a new suffrage society at the home of Florence Wyman Richardson. This new society, a branch of the National American Woman Suffrage Association, was called the St. Louis Equal Suffrage League. Violet served as a charter member and was elected auditor. In May, Violet attended a meeting of the National Women's Trade Union League, an organization which sought to unite women of wealth with laboring women leaders to better the conditions of all working women. Suffrage was one of its articles of faith. Also, in May, Violet hosted Mrs. Frances Squire Potter, corresponding secretary of the National Suffrage League, in her home during a visit to address the League. A newspaper article reporting Mrs. Potter's visit cites Violet as "one of the college women suffragists of the city."

Violet remained an active member of the St. Louis Equal Suffrage League serving as chairman of membership and as a member of the finance committee for the Committee on Convention. She served in prominent roles for the suffrage activities organized around the Democratic National Convention in 1916 and the conventions of the National American Woman Suffrage Association and the Missouri Woman Suffrage Association in 1919. In June of 1916 during the Democratic National Convention in St. Louis, Violet helped organize the Golden Lane, a demonstration meant to bring attention to how women had been silenced by not having the right to vote. More than 3,000 women lined twelve blocks along Locust Street wearing white dresses, "votes for women" sashes, and holding yellow umbrellas. During the convention, Violet also served as head of the flying squadron. The flying squadron was composed of twelve automobiles carrying eminent national speakers on suffrage who would address crowds gathered at street corners. During the 50th National American Woman Suffrage Association convention held in St. Louis in March of 1919, Violet served as chairman of the Housing Division's Hospitality Committee, ensuring delegates and visitors were "properly and comfortably located." Also, during the convention, Violet helped organize an "Inquiry Dinner" at the Hotel Statler "concerned with the reasons why the Federal suffrage amendment should be, and has not been passed." With 800 reserved guests, local newspapers called the dinner the "largest social function that St. Louis has seen in many days." At the convention of the Missouri Woman Suffrage Association in October of 1919, Violet served as both a delegate and general chairman of the political dinner.

After passage of the suffrage amendment, Violet continued her work with the Missouri League of Women Voters, formerly the Missouri Suffrage Association, serving as chairman of a drive to collect $15,000 to carry on their work. Despite her dedication to the cause, Violet was not optimistic that women would utilize their new right to its fullest extent. In an interview published in the St. Louis Globe-Democrat on August 7, 1921, in response to a question inquiring if Violet thought women's interest in politics would increase with their new right, she responded "No. The passage of the amendment is more a matter of abstract justice, and I do not believe it will bring any immediate response.." Despite how Violet thought women would respond to their new right, she dedicated much time and effort to the cause and on September 23, 1959, in an article published in the St. Louis Post-Dispatch called "40 Years of Progress by Women Voters," Violet was named an early leader of stature. After 1921, not much is recorded about Violet. It appears Violet relocated to Connecticut by 1923 and New York by 1939, according to an announcement on October 3, 1939 in the Rochester, New York Democrat and Chronicle that her husband had joined the investment firm Delafield and Delafield in New York City. This information is confirmed by U.S. Census records. Announcement of her husband's death in 1955 lists his address as 1170 Fifth Avenue and Violet as his surviving widow. According to the Connecticut Death Index, Violet died on September 21, 1987 in Litchfield, Connecticut at the age of 87. 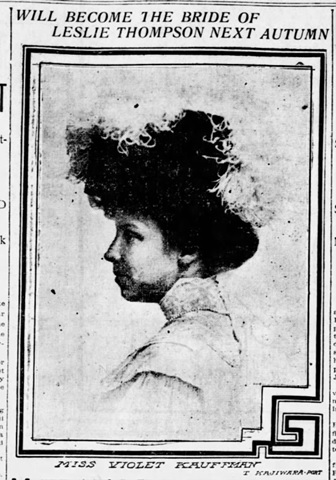 Violet's suffrage and community work is reported on widely in St. Louis newspapers such as the St. Louis Post-Dispatch, St. Louis Globe-Democrat, and The St. Louis Star and Times.