Biographical Sketch of Clara B. Arthur

Clara Blanche Arthur (née Peters) was born in St. John, New Brunswick on October 25, 1858 to Alexander Peters and Martha H. Lewis. While details on Clara's early life are unclear, she immigrated to the United States by 1882 and around the same time was married to fellow Canadian immigrant James Arthur. By 1900, James was supporting the family as a studio photographer, and the Arthur Studios supplied numerous photos of Clara and other women to local papers. 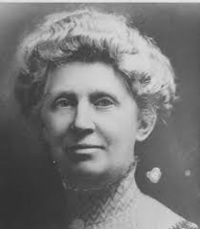 Clara joined the Michigan Equal Suffrage Association (MESA) soon after its formation in 1884. She rose through its ranks, serving as its vice-president from 1900-1906 and president from 1907-1913. Much has been written about Clara's leadership of MESA, where she was noted for her efforts to pass a state suffrage amendment. In 1908, she joined Carrie Chapman Catt and other suffragist leaders in asking the state constitutional convention for the vote. Later during her tenure, Michigan women came tantalizingly close to achieving this goal. In two separate occasions in 1912 and 1913, the suffrage amendment lost at the ballot box. The 1912 campaign, in particular, was notable for its defeat by just a few hundred votes in an electoral process that was widely viewed as fraudulent on the part of the anti-suffrage movement. Following her retirement as president, she was elected as member of the executive committee of NAWSA.

Clara was a prominent activist well beyond the bounds of the suffrage cause. She helped establish public baths for the poor and was a charter member, trustee, and president of the Detroit Tuberculosis Society. In the area of education, she was an ardent supporter of co-education of boys and girls. She also helped establish some of the first public playgrounds in the city, a feat for which she eventually became known as the "Mother of the Playground Movement." Late in life, Clara even dabbled in early environmentalism, advocating for a bill that would help preserve threatened populations of native wildflowers from invasive species. Clara died on July 26, 1929, survived by her three children.

Votes For Women Majorities Are Reversed in Many Sections of Michigan as Against 1912. Detroit Free Press, Apr 8, 1913, 1. ProQuest.