Sara(h) A. Crowell was born in Hammonton located in Atlantic County, New Jersey on January 12, 1869. Her father, Edwin Levi Crowell was from Maine, and her mother, Mary Eliza Mac Inness was from the Isle of Skye in Scotland. Her lineage stretched back to the American Revolution, as a "Lineage Book," for the Daughters of the American Revolution indicates. Raised in Hammonton, she came from a middle-class background becoming an intermediate teacher in Atlantic County; which would indicate that she might have gone to college or completed teacher training. She graduated from the local Hammonton high school in 1884 according to New Jersey's Board of Education "Report," and in 1890 was listed in the local South Jersey Republican as being an intermediate teacher. Being listed in the Biographical, Genealogical and Descriptive History of the First Congressional District of New Jersey indicates the local renown of her family. Crowell's four brothers were also highly educated, and one of them, Godfrey M. Crowell, became a physician who practiced in many states. Her other brothers included Preston Crowell of Harrisburg, Pennsylvania, Wilson Crowell of Dallas, Texas, James H. Crowell of Linden, New Jersey, and Chester Crowell of Boston, Massachusetts. In the Harrisburg Evening News 1922 obituary for her brother, Preston Crowell, she was referred to Mrs. Sara Crowell of New York, but no other records indicate to whom or when she married (so it may have been a typographical error). Perhaps related to her suffrage involvement, census reports show that Sara Crowell did not stay in New Jersey, living in various states including Maryland in 1910 and Washington, DC in 1920. The census also indicates that she was a trained nurse sometime after 1910.

Sara Crowell was involved in the suffrage movement in New Jersey, serving as the recording secretary of the Women's Political Union (WPU) of New Jersey. A recording secretary's job would have include recording issues and items that were mentioned during a meeting or conference and other low-level clerical work. The WPU was one of the many New Jersey-based organizations that fought for women's suffrage. Crowell was the recording secretary from June 1913 to 1915, when the WPU was disbanded. Crowell also spoke at the South Jersey Suffrage Campaign Conference in October 1914 held in Haddonfield, New Jersey. The South Jersey Republican listed her as the "State Vice-President," and at the conference she spoke about "South Jersey problems." Crowell, like other members of the WPU was a peace advocate, and the Bridgewater Courier News reported that she participated in a 1914 parade with other WPU suffragists. The WPU rejected other mainstream suffrage groups' support of Woodrow Wilson's decision to enter World War I.

The Women's Political Union (WPU) was first founded in 1907 by Harriet Stanton Blatch as the Equality League of Self-Supporting Women (ELSSW). According to Suzanne O'Dea, Blatch hoped that the ELSSW would revive the women's suffrage movement. It organized women from a wide range of professions including: doctors, lawyers, milliners, and industrial workers who were ignored by the mainstream suffrage organization the National American Woman Suffrage Association (NAWSA). The ELSSW had many working class women members as there were no fees for their membership and they helped train trade union women how to testify before the New York legislature; the first time working-class women had done so. The ELSSW changed its name to the Women's Political Union (WPU) in 1910, hoping to encompass a broader range of women. The WPU held open-air meetings and outdoor parades; and often used newspaper publicity to get recognition for the suffrage movement. The headquarters of the WPU was located in Newark, the most populous city in New Jersey and only eight miles away from the stronghold of suffrage activism, New York City. The WPU merged with the Congressional Union, another radical organization, in 1916, under Alice Paul. It was renamed the National Woman's Party, and it remained the most activist and radical of suffrage movement organizations.

No records indicate when or where Sara Crowell passed away. In 1910 census she is listed as a servant living in Baltimore, Maryland, with the profession of "trained nurse." In the 1920 census, she is listed as a lodger to Margaret Brown; with both of them listing their profession as "nurse."

Biographical, Genealogical and Descriptive History of the First Congressional District of New Jersey. Vol. II, (1900). n.p.: The Library of Congress, 1910.

New Jersey. State Board of Education, "Report of the State Board of Education and State Superintendent of Public Education," (Trenton, NJ: John Murphy Printer,1884), pg. 38, available at https://books.google.com/books?id=zBZLAAAAYAAJ&pg=PA7&dq=State+Board+of+Education+State+Superintendent+of+Public+Instruction,+For+the+School+Year+Ending+August+31st,+1884.+(1884).&hl=en&sa=X&ved=0ahUKEwiTqa3Gu5_dAhUMVd8KHWO1DiAQ6AEILjAB#v=onepage&q=crowell&f=false 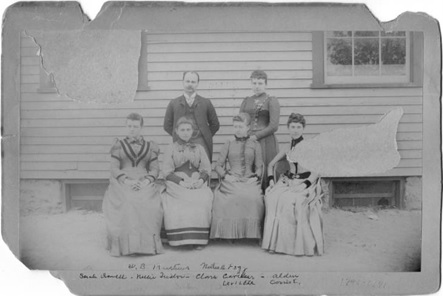