Woman Suffrage Activist and Friend of the Seminoles

Ivy Julia Cromartie was born on February 24, 1881, in White Springs, Florida, to Sarah Elizabeth Driver and Augustus Whitfield Cromartie. When she was young, her family moved south in Florida and settled near Owens, Florida, where she walked five miles to school. They lived in a palmetto thatched hut that her father built, which had a floor of white sand. They also lived in Juno, Florida, for several years, but by 1899; they lived in Lemon City, Florida, where she completed her education at Lemon City School.

After passing the state teachers' exam, Ivy traveled to Fort Lauderdale to teach in the first school there. Soon after she arrived, she met the postmaster, Frank Stranahan. He had established a trading post called Stranahan Camp where the Seminoles from the Everglades came to trade. He also ran the ferry across the New River. Before long, she had promised to marry Frank Stranahan. They were married on August 12, 1900, in the Miami Methodist Church in Lemon City and returned to live in Fort Lauderdale. Frank Stranahan is considered the founder of Fort Lauderdale and Ivy Stranahan was known as the mother of the city.

In 1915, Stranahan's club work began to intersect with her suffrage work. She attended the state convention of women's clubs as a delegate and was among those reported to be "especially enthusiastic over the movements endorsed there, particularly regarding the one on equal suffrage." In August 1916, she attended a tea hosted by Kate Havens, a prominent suffrage activist, where the fall campaign for suffrage was discussed. And in October 1916, Stranahan accompanied Havens and other women on a trip to Pompano and Halladale with the goal of organizing equal suffrage leagues there.

At the March 1917 state convention of the Florida Equal Suffrage League, Stranahan was elected its president; she succeeded Rev. Mary Safford, who was made an honorary state president. Stranahan led a session at the convention on "Sectional Objection to Suffrage" in which she "spoke particularly of the confused idea of chivalry existent in the south and further spoke of the question of the negro vote as it concerned Florida." She went on to say:

"If Georgia or South Carolina or some other state happens to have a larger negro than white population, that is the problem of that particular state. We are asking for the ballot in Florida and here -- if you judge from the present elections -- men seem to have no trouble in controlling the negro vote."

She also advocated for industrial education for "the negro."

Just one month after her election as president, Stranahan traveled to Tallahassee to lobby the state legislature on a woman suffrage bill. A suffrage amendment was introduced by joint resolution in both the state senate and state house; it was unanimously favorably supported by the senate committee. Stranahan and others addressed the house committee in a hearing, with the house members voting six in favor and two opposed; those two votes defeated the bill.

During the summer of 1917, Stranahan stepped up suffrage efforts by calling for local leagues to be organized on Florida's west coast by securing a speaker of national prominence and initiating an automobile tour of the area. She also appointed a state congressional chair to oversee organizing work in the various congressional districts across the state and held a rally in support of suffrage in Fort Lauderdale. The rally was designed to launch a campaign for municipal suffrage in Fort Lauderdale that would allow women to vote in local elections.

In November 1917, Stranahan reported to the state suffrage convention on the successes of the league. She summarized the history of suffrage and the widening of support for it across the state. Stranahan linked woman suffrage to the war effort and patriotism. She said:

"Some state that the woman's place is in the home, and yet the war is thrusting them into fields they never occupied before. Economic conditions forced women to seek their livelihood. It was not from choice, but necessity. We agree that woman's place is in the home, but not in the home We regard the world as the home, and we want the ballot to protect the home. When our children leave home in the morning they go to schools over which we have no control, through streets whose governing is in other hands than ours. Shall we protect the child in the home and then leave him unprotected elsewhere? We need the viewpoint of mother in legislation, and as a war measure woman should have the ballot."

Stranahan also noted that municipal suffrage had been gained in Orange City, Florence Villa, and Okeechobee, where women could now have a voice in city government; and that some women were serving on city councils, on school boards, and as mayor.

In January 1918, Stranahan expressed hope that President Wilson's endorsement of a federal suffrage amendment would bring successful support of the measure to Florida. Stranahan collected petitions and resolutions representing over 12,000 Floridians in support of woman suffrage and, in October 1918, took them to the state senate. The Miami News reported:

"Mrs. Stranahan has proved to be an excellent leader in the interest of suffrage and is surprising her friends who have known her only in private life...She is now among the strongest workers of the state for the vote for women."

Nonetheless, the state legislature again failed to pass a suffrage amendment. At the November 1918 state convention of the Florida Equal Suffrage League, Rev. Safford was elected its president and Stranahan was made vice president, as well as chair of the legislative committee.

In January 1919, the Florida Equal Suffrage Association began what was described as an intensive campaign for enfranchising women through a federal amendment, as well as through state legislation that would allow women to vote in state primaries. Stranahan was part of the campaign, which included a ten-day letter writing drive to convince Florida's U.S. Senator Park Trammell to support the measure. Stranahan also spoke to the press on several occasions expressing her hopefulness that these legislative actions would succeed. In March and April, she spoke before crowds in West Palm Beach, Miami, and Tampa concerning the right to vote in primaries. She said

"It would take strength, time and a great deal of money to put on a campaign for constitutional state suffrage, and not only would it take one campaign but it might take several...Therefore the Florida Equal Suffrage association has decided to ask for primary suffrage."

Once again, however, the Florida legislature failed to grant Florida women primary suffrage.

Although Stranahan was active in women's clubs, the Red Cross, and efforts to support World War I, she is best known for her work with the Seminole Indians. She taught the children English and the Bible. In 1924, she worked to establish the Dania Reservation for them when the city of Fort Lauderdale began expanding and pressuring them to move out. She convinced them to make the move, drove them to the reservation site, and provided supplies to help them establish buildings. By the end of the year, they had built several homes, a school, and an administration building.

In the 1940s, she continued to support educating the children of the Seminoles. When the Friends of the Florida Seminoles Foundation was chartered as a non-profit organization in 1949, Stranahan was its president. The foundation supported building homes for the Seminoles on the reservation. And when government support of the program ended in 1954, Stranahan and the foundation helped the Seminoles establish themselves as a business, which allowed them to eventually incorporate in 1957 as the Seminole Tribe of Florida, Inc.

Unfortunately, on May 22, 1929, Frank Stranahan committed suicide by drowning himself in the New River after losing his money in the stock market. Ivy Stranahan continued to live in their home, which was originally called Pioneer House, until her death on August 30, 1971. Her home has now been preserved as the Stranahan House Museum. 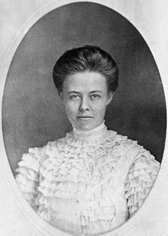 Ivy Cromartie Stranahan, from the State Library and Archives of Florida

"Local Politicians and Suffragists Are Certain That Victory Will Be Recorded Before the Day is Over." The Miami News (Miami, Florida) January 10, 1918, p. 1.