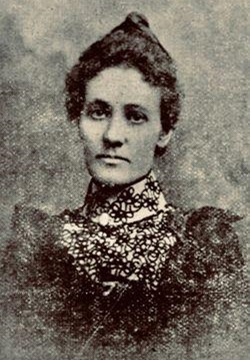 Lillie married Charles Washington Mitchner on March 30, 1883 and soon after the couple migrated to Kansas with Charles's brother Thaddeus and his wife, Nellie. In Kansas, Charles worked as a cattle trader and sometimes partnered with his brother, who owned and operated a restaurant. On November 23, 1884, Lillian gave birth to a son, Elbert E. "Bert" Mitchner.

By 1905, Charles and Lillian were living in Douglas, Kansas with Lillian's sister Bessie and Bessie's seven-year-old son, Donald. It was around this time that Lillian became a Kansas Woman's Christian Temperance Union officer and her husband was elected Mayor of Baldwin, Kansas. As early as 1901, Lillian was elected a WCTU District President; by 1906, she was serving as the organization's Corresponding Secretary; and in 1910, she was elected Kansas state WCTU President, an office she held for twenty-eight years.

As WCTU President, Lillian made woman suffrage the organization's focus. She quickly earned a reputation as an enthusiastic public speaker. She used the WCTU's monthly newsletter, called Our Messenger, to emphasize the importance of equal suffrage and call members to action. In the December 1, 1910 issue of Our Messenger, she wrote, "Dear Sisters: the state convention voted to undertake a suffrage campaign this winter asking the state legislature for an amendment to be submitted to the people at the next election. Petitions will soon be ready for circulation. Get ready to do this work quickly when the call comes. We know we can depend on the faithful women of the local unions. Do not fail. Yours for victory, Lillian Mitchner, Pres."

By 1911, Lillian and the Kansas WCTU joined forces with the Kansas Equal Suffrage Association. The K.E.S.A. lauded her as "an active worker in the suffrage cause" who pledged the support of over 9,000 WCTU members, whom she called "faithful allies" in a common cause. K.E.S.A. officer Lucy B. Johnston noted, "The WCTU of Kansas has been growing stronger in the Franchise Department and [WCTU] President Mitchner worked hand in hand with our [K.E.S.A.] President Catherine Hoffman." By this time, Lillian had become "a familiar figure at Kansas legislative sessions where she was an effective lobbyist."

Lillian devoted a large portion of the March 1, 1912 Our Messenger to the topic of suffrage. After presenting a lengthy pro-suffrage argument, she concluded by saying, "If you believe In Votes for Women, do something" and giving WCTU members a list of actions they could take to support woman suffrage. She urged readers to purchase and give away suffrage literature to friends, at clubs, in letters, and in meetings; use suffrage postcards and rubber stamps; as well as "[w]rite suffrage articles for the papers. Answer every article opposed to Equal Suffrage. Provide students with material for debate. See that your public library has good Suffrage Literature. Ask your minister to preach on Suffrage. Time, Service, Money, Yourself, Everything counts. I hope each White Ribboner will feel she has something to do in this department. Yours for equal rights to all and special privileges to none, Lovingly, Lillian Mitchner."

Lillian's position as WCTU President took her to speaking engagements not only to all corners of the state of Kansas, but also to other states in the Midwest and as far away as Oregon, California, Colorado, and Washington. One 1914 newspaper account called her "one of the most forceful and magnetic speakers among the Kansas women, and they number several good public speakers."

In addition to her work with the WCTU, Lillian served as superintendent of the Industrial School for Girls in Beloit, Kansas. She was a member of a few other social and philanthropic organizations, but her WCTU work remained closest to her heart. Even her husband, in his retirement, lent a hand to WCTU causes.

Lillian Early Mitchner died in Topeka, Kansas on August 15, 1954 and is buried near her husband in Greenwood Cemetery in Newton, Kansas. One newspaper memorialized her by writing, in an obituary titled "A Fighter Departs," that "the death of Mrs. Mitchner brought to mind the true character of a breed of women who were not 'blue nosed' as they were so widely termed but who were actually dedicated, sincere and at many times souls with a sense of humor of joy for living that too frequently went unnoticed. ... [Her] causes were many, including women's suffrage, child welfare, and better labor laws, to name a few. ... [I]t is to the eternal credit of her and those who believed as she did that they exercised a vigilant and even militant attitude in regard to major issues...." Another commended her in this way: "The name of Mitchner was variously loved and feared but seldom underrated. For many years she had wide influence in state political circles and in public affairs generally. ... She was noted as a public speaker who had something to say and knew how to say it."