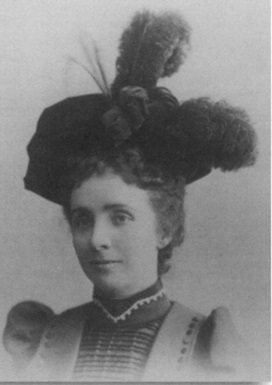 Regina Victoria Mills was born to Jabez Mills, a Quaker farmer, and his wife, Delila Davis Mills, in Ohio on April 29, 1867. Her siblings included brother Edgar and sisters Lucelia and Ella. The family lived in Indiana for a time before Regina migrated to Kansas in the late 1880s, where she taught school in the towns of Alma and Lincoln. It is unclear exactly when and why Regina came to Kansas; however, she had obtained a teaching license in the state by 1887, and newspaper society pages reported she had cousins ("the McPhersons") in Harveyville. She married Martin A. Chambers, an attorney and member of the Kansas House of Representatives, on March 5, 1890. The couple settled in Hoxie, Kansas and had one daughter, Lois, born in 1891.

According to the Women Attorneys Association of Kansas, "Regina Victoria Mills-Chambers was one of the first women to practice law in Kansas and was the first woman to practice law in Sheridan County, Kansas. She was admitted to practice in Sheridan County in 1900 and the Kansas Supreme Court in 1907. Her certificate of admission to practice law before the Kansas Supreme Court was templated only for male attorneys; therefore, each 'his' was carefully crossed through and 'her' was handwritten in on her certificate. Mills-Chambers was considered a 'brilliant addition' to the legal profession; rather than the examination by a committee given to her male counterparts to determine admission to the bar, she was instead given a 'severe test' by the Hon. C.W. Smith. She passed with flying colors and Smith considered it 'one of the best examinations he ever conducted and complimented her highly on her achievement.' Mills-Chambers went on to form a law partnership [Chambers and Chambers] with her husband, M.A. Chambers, in 1900." After her husband's tragic death in a Kansas City, Missouri hotel elevator accident while on a shopping trip with Regina and Lois in October of 1908, Mills-Chambers continued practicing law as a solo practitioner until her death in 1911. She litigated many high-profile cases, both on behalf of the plaintiff and defense, and argued before the Kansas Supreme Court in 1909.

In addition to her law career, Mills-Chambers took interest in many social causes of the day, including suffrage. She was a founding member of the Sheridan County Suffrage Club in 1894. In 1904, she was elected Sixth District President of the Kansas State Federation of Women's Clubs, and she was elected First Vice-President of the Kansas Equal Suffrage Association in 1909. She was also actively involved in the Women's Relief Corporation and the Woman's Christian Temperance Union.

Mills-Chambers died on December 10, 1911. Her obituary stated that "She was a woman who always looked on the bright side of life and in this way made her own life and the lives of others more agreeable and happy....It is a trial to give up such noble people, but we are glad to know that such characters have lived and left the impress of worthy lives upon the sands of time." She is buried in Hoxie Cemetery in Hoxie, Kansas. The Kansas Historical Society holds a quilt handmade by Mills-Chambers in the Baby Blocks/ Tumbling Blocks pattern and inscribed in her handwriting in ink.

Ancestry.com and The Church of Jesus Christ of Latter-day Saints. 1880 United States Federal