Miss Maxwell grew up in Alexis, Mercer County, Illinois, attended Monmouth College, completed teacher certification, and taught in rural schools. She married Harrison Munro Brown on June 6, 1894. The couple resided in Alexis before settling permanently in Peoria, where Harrison rose as a salesman and executive in a local crockery firm. Available sources do not indicate the Browns had children.

Adella was active for several years in the Illinois Equal Suffrage Association and held leadership positions in the Peoria chapter and the state-level organization.

On April 10, 1912, about 75 women associated with various clubs met in the Assembly Room of Peoria City Hall to organize the local chapter, with a committee of five working to draft a constitution and nominate a slate of officers. Two meetings during the next week sealed the founding and Mrs. Brown was elected as the original chapter president. (A local reporter hailed her as "a conspicuous worker in the Peoria Women's Club" with "sane, progressive" suffrage ideas.) Gearing up quickly, on April 19 Mrs. Brown and other local suffragists greeted an arriving Chicago-area contingent (led by Catharine Waugh McCulloch) that sought a renewed suffrage plank from the state Democratic delegates convening that day in Peoria. (The attempt failed.)

The new Peoria organization soon affiliated with the Illinois Equal Suffrage Association and by the fall of 1912 Adella was superintendent of church organizations at the state level.

The 1915 city "blue book" history and directory profile of Peoria Equal Suffrage Association claims that under Brown's leadership the young chapter "began to take an active part in the campaign for suffrage, securing more names in proportion to population than any other city in the state for the [1912] public policy petition to bring equal suffrage before the legislature." Peoria welcomed Illinois Equal Suffrage Association president Grace Wilbur Trout for a public address on March 17, 1913.

Peoria unit civic work in 1914 included an instruction school to teach women, in a non-partisan manner, the methods of voting. This "energetic" campaign included numerous speeches, ward meetings, and visits to every polling place, with over 400 women registered along the way. (The Peoria "blue book" account credits the major part of the campaign work to Adella and two other chapter women, who also petitioned the local commissioners to use churches and school buildings as polling places instead some of the "undesirable" and "carelessly managed" sites used before.) The voting campaign was repeated in 1915, a year that also marked the reelection of Mrs. Brown as Peoria chapter president.

The state association had convened in Peoria in 1913, the year of a partial suffrage law in Illinois. Adella was elected second vice-president, thereby becoming the first woman from the city to hold an executive position on the Illinois board. (The 1913 convention program also credits her with a talk on suffrage organizing in towns.) Re-elected as state second vice-president in 1914, her rapid rise within the organization continued when, during the 1915 convention in Peoria, she was elected, unopposed, as state president for the upcoming term. (Incumbent president Trout had declined to be a candidate for reelection.) A Peoria newspaper touted Mrs. Brown as "the logical successor" to Trout, being directly in line as a vice president and the "strongest available possibility" for the state presidency. A Chicago reporter said she "classes as one of the most adept, skillful, and diplomatic politicians among the women who have fought for the vote in Illinois."

Brown's state-level presidential term saw continued efforts in Illinois to achieve full suffrage and also coincided with major party political conventions in advance of the 1916 national elections. The Republican convention was held in Chicago and she chaired the organizing committee for the National Woman Suffrage Parade, held on June 7, 1916. She also journeyed to St. Louis as part of the Illinois suffragist presence during the Democratic convention, praising how the state contingent assisted in carrying the Golden Lane demonstration to "successful fruition" as thousands of delegates passed by. (Both parties adopted suffrage planks.)

The month before the national party conventions Mrs. Brown attended the Mississippi Valley Suffrage Conference in Minneapolis, where she spoke as part of a symposium on "the woman vote" in Illinois. According to meeting reports in the suffragist press, Brown said that, after the state's women obtained their franchise, municipal cleanliness in streets and alleys received much attention, school facilities and programs improved, and more than 1,000 saloons were closed.

Her state report for the 48th NAWSA convention in Atlantic City also noted that the 1916 opportunity and "thing most needed" in Illinois had been "careful educational work carried on by capable organizers" to gain "sympathetic understanding and staunch moral support of the women of the state as a whole." This "energetic" campaign achieved considerable growth in affiliated societies and members, she reported, and large in-state conferences also increased "suffrage enthusiasm" in communities.

Brown's Illinois Equal Suffrage Association presidency lasted one term, but she continued her suffrage activity in 1917 as a director within the state organization and as a downstate leader in the Woman's Emergency League campaign drive. She was also among several Illinois "Congressional Aides" designated by the Congressional Committee of NAWSA.

For many years she made civic contributions through women's clubs organizations at the local, state, and national level. One major achievement was her 1922 election as Director from Illinois of the General Federation of Women's Clubs, headquartered in Washington, DC.

During World War I she served on the Woman's Committee of the Illinois State Council of Defense. Brown and other prominent suffragists and club women participated in 1918 on an advisory committee to the Illinois Highway Improvement Association, supporting a good roads bond issue. She was also a downstate member of the general citizens' committee for the ratification of the proposed 1922 state constitution, which was rejected by Illinois voters.

Adella Maxwell Brown passed away in Long Beach, California, on February 21, 1945. She is buried next to her husband Harrison (1869-1937) in Alexis Cemetery, Alexis, Illinois. 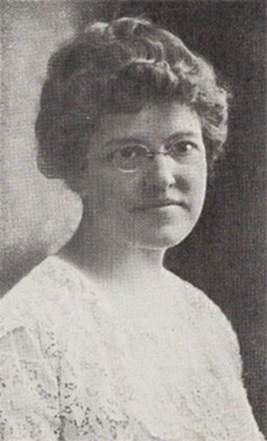 See her report as General Federation Director for Illinois in the 1922/23 directory and yearbook of the Illinois Federation of Women's Clubs: https://babel.hathitrust.org/cgi/pt?id=uiug.30112109504263&view=image&seq=159