Rosa Goodrich was born in a family of distinction, was afforded the privilege of an exceptional education, toiled for progressive reform, but her many accomplishments were tainted by scandal. She was born in 1870 in Navasota, Texas, to Rosa Meador and Briggs Goodrich, the son of physician Ben Goodrich who was a member of the Texas constitutional convention that declared independence from Spain in 1836. Briggs Goodrich was a violent man who killed a man prior to his marriage to Rosa and then stabbed his wife to death when Rosa was an infant. Although the death was deemed an accident -- Goodrich claimed he thought he was stabbing a burglar -- a few months later he fled with a new wife to the West Coast, leaving his infant daughter to be raised by his mother.

When her grandmother died in 1884, Rosa was sent to Pacific Methodist College in Santa Rosa, California, before attending Cooper Medical College (later Stanford University Medical School), where she began her political initiation. In 1892 she was elected a delegate to California's Prohibitionist party convention and would remain committed to the cause and active in the Woman's Christian Temperance Union (WCTU ). Her 1893 marriage to fellow medical student Norberto Lorenzo Boido further cemented her to political activism. Lorenzo Boido was born the son of an Italian father and Mexican mother, prominent citizens of Guaymas, Sonora, Mexico, and would later become a leader in Liga Protectora Latina and Alianza Hispano-America, mutual aid societies that fought for rights for Mexicans living in Arizona. After their graduation, the newlyweds practiced medicine in Guatemala, where their son and daughter were born. In 1899 Rosa and Lorenzo brought their family to live outside of Tucson, where he was the surgeon for the railroads and she the examining physician for the Maccabees.

Rosa's interest in prohibition led her to join the equal suffrage movement in Arizona, working with Josephine Brawley Hughes, the founder of the movement in the territory. Rosa became the president of the Equal Suffrage Club of Pima County. Although the Pima County organization had only five members -- Boido, Hughes, Abbie O. Haskins, Ruth May Nowell, and Dr. Clara M. Schell -- they proved effective workers, holding banquets featuring suffrage speakers. In summer 1912 they collected in a few weeks the signatures from Pima County needed place a suffrage initiative on the fall ballot. Rosa was singled out for being "particularly well known in a professional way and for the work she has done for the benefit of the suffrage question."

But Rosa Boido was at odds with Frances Willard Munds over AESA's position on Mexican voters. When NAWSA organizer Laura Clay arrived in Arizona in 1909, she induced local leaders to back legislation that required a literacy test for voting in the belief that foreign-born voters were anti-suffrage. Rosa's reluctance to affiliate with the state movement likely originated in this direct assault on the rights of citizens, but the two managed to keep their disagreement hidden for the good of the cause. She told the press: "Women are never going to succeed until they put aside the personal equation. We must forget every difference and unite in a common cause -- Votes For Women." When NAWSA organizer Laura Gregg toured Arizona in 1910, she realized that a significant portion of the Mexican-born population was interested in suffrage, so AESA moderated its stance, printing campaign literature in Spanish and holding meetings in the homes of leaders like the Boidos and Lorenzo Hubbell who, as head of the state Republican party, was finally convinced to support suffrage in the party plank in 1912.

On election day as male voters decided on a suffrage amendment to the state constitution, Rosa Boido spent the day monitoring the polls, and when the victory was assured she encouraged the newly enfranchised to "show our appreciation to the politicians who assisted us." She had invited NAWSA president Anna Howard Shaw to Tucson during the 1912 Arizona campaign and Shaw sent her a warm victory letter: "Congratulations on the splendid victory. Arizona men are worthy of their wonderful state and loyal women."

Boido continued crusading for progressive reform, "urging and assisting the new citizens to meet their obligations." She served as an election precinct officer and attended rallies by the Congressional Union when they came to Phoenix in 1915 to advocate passage of the Nineteenth Amendment. She had honed her public speaking skills as superintendent of scientific temperance for the state WCTU and in the suffrage movement and continued to speak to crowds on hygiene and health, and especially prohibition: "I believe that women should devote their attention to prohibition for the present." They did. The next election a ballot initiative outlawing alcohol passed. Rosa was an active member of the Phoenix Civic League, which pressured the city to increase inspections of slaughterhouses and other institutions that affected public health. She also served as the only female officer in the organization that ushered through a bill banning the death penalty in 1916.

After moving to Phoenix in 1911, she established the "Twilight Sleep" Hospital for expectant mothers, introducing the pioneering and controversial use of narcotics for alleviating pain during childbirth. During the 1910s, Rosa, her husband, and both of their children became fixtures in Phoenix society, but scandal touched her life again when she was convicted of performing an abortion on a fifteen-year-old girl at her hospital in 1918. Her husband also faced criminal charges for fathering two children outside of marriage, leading Lorenzo to conclude there existed a "political plot" to silence him. The notion was not far-fetched. During World War I anti-immigrant sentiments prevailed. Newspapers called him a "political rascal" and "the king among Mexican voters." One editor went to far as to suggest the Boidos should be deported as "undesirable citizens" for their alleged crimes.

Rosa served less than 30 days of a two to three-year sentence before being paroled, while her husband fled the country before standing trial. The couple divorced and, when her medical license was revoked by the state, Rosa moved to the West Coast with her daughter and son-in-law. Rosa Goodrich Boido died in 1959 while living with her grandson, also a physician, in Kauai, Hawaii.

Jo Connor, compiler, Who's Who in Arizona (Tucson: Press of the Arizona Daily Star, 1913) 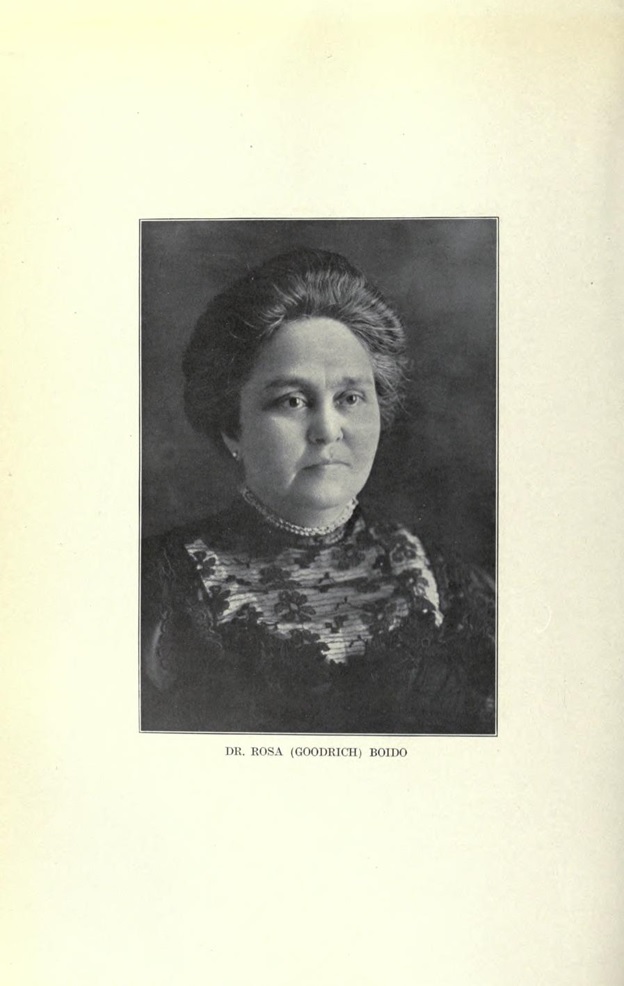 Photo Source: Jo Connor, compiler, Who's Who in Arizona (Tucson: Press of the Arizona Daily Star, 1913)