Born Izetta Jewel Kenney on November 24, 1883, in Hackettstown, New Jersey, actress and activist Izetta Jewel arguably impacted all of our lives in a significant and lasting manner.

An incredibly popular stage actress, Izetta Jewel performed on Broadway, and all around the country, moving to Washington, DC around 1912, after her acting career blossomed on the West Coast.

As a leading actress at the popular Poli Theatre in DC, her audience often included important government officials, with Presidents Roosevelt (TR), and FDR (while Assistant Secretary of the Navy), Taft, Wilson, and Harding among her most ardent fans. In fact, on the night the Titanic sank, President Taft chose to remain in his box until the end of her star performance on the opening night of the ironically titled play, "Nobody's Widow."

Izetta Jewel married West Virginia Congressman William Gay Brown, Jr., in December, 1914, and left the stage to the chagrin of many. Introduced to women's suffrage at a young age by her mother, Izetta Jewel is said to have become the National Woman's Party (NWP) West Virginia state chair soon after her marriage. Jewel was a founding member of the NWP, and the relationships she honed at the Poli Theatre proved important for passage of the 19th Amendment, as well as in the continuing struggle for women's rights. Izetta Jewel continued to campaign for the Equal Rights Amendment well into her 80s.

Izetta Jewel became the first woman to nominate a candidate for president at the 1920 Democratic Convention, and she had the podium again at the 1924 Convention. In 1922 and 1924, Jewel ran for Senator in West Virginia, one of the first women to run for political office in the United States, losing in the primary by a narrow margin.

Izetta Jewel married Union College professor Hugh Miller in 1927, and moved to Schenectady, New York where she served the community in a variety of roles. (At the time, Schenectady was the headquarters of General Electric (GE).) The following year, Izetta Jewel became a pioneering radio broadcaster at GE's WGY, and later that year performed in the first ever Radio Television Drama, "A Queen's Messenger."

Izetta Jewel ran for the 30th Congressional District in 1930. The next year, she ran for NYS Assembly District 2 losing again by a small margin (about 500 votes). At the height of the Great Depression, Izetta Jewel served as Schenectady's Commissioner for Public Welfare from 1931 to 1934, and volunteered for numerous public service projects. She barnstormed the country with female aviation pioneer, Phoebe Omlie, in 1936, while stumping for President Franklin D. Roosevelt's re-election. She later served the Roosevelt administration in a number of positions, "retiring" to La Jolla, California with Hugh Miller at the end of World War II.

Retirement was never in the cards for Izetta Jewel. In her adopted hometown of La Jolla, she continued trying her hand at new projects and finding new ways to make the world a better place.

Izetta Jewel was a true pioneer, acting at first somewhat out of necessity after being widowed as a young new mother. Curious to a fault, she blazed a trail for the rest of us, and set a shining example of how to live life to the fullest.

Izetta Jewel never, ever let a moment define her . . . she always defined the moment. 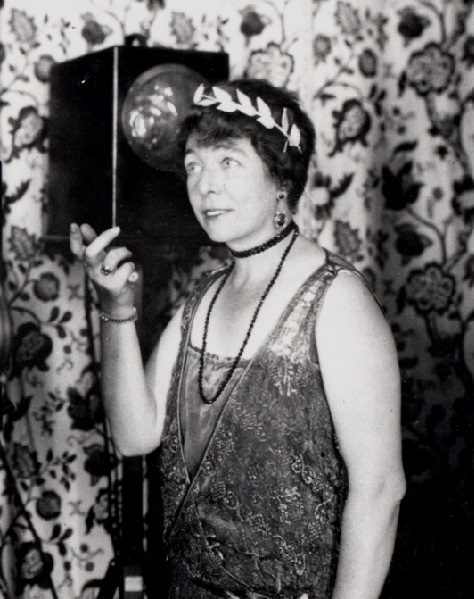 Izetta Jewel, the first leading lady of a dramatic production presented on television. On September 11, 1928, Jewel starred in the historic broadcast of "A Queen's Messenger Returns" in the groundbreaking broadcast from WGY-TV in Schenectady, New York. MiSci Museum of Innovation and Science, Schenectady, New York