Ellen L. Ashley was born in Barnard, Vermont in 1843. In 1860, she was a servant in a Barnard household. By the early 1870s, she was living with her older sister Julia and her husband Edward Pierce (1843-1914), a merchant, in Rochester, Vermont. Ellen and Julia both worked as milliners. In 1883, Ellen married her sister's father-in-law, Chester M. Pierce (1819-1896). Chester ran a very successful mercantile business in Rochester until 1867, when he retired to manage his extensive properties. He served in the Vermont legislature twice, representing Rochester in the House of Representatives from 1865-1866 and Windsor County in the Senate from 1886-1887.

For the Pierces, women's suffrage was a family affair. Ellen, her sister Julia and her husband Chester supported the right of women to vote and they were all active in the Vermont Woman's Suffrage Association/Vermont Equal Suffrage Association for many years (VWSA/VESA).

In 1886, Chester Pierce supported a bill when it reached the Vermont Senate that would have allowed women who were taxpayers to vote in municipal elections and hold municipal offices. The Burlington Free Press reported, "Senator Pierce favored the bill as an act of justice to women. The Senate had received petitions from 3500 persons, mostly women, asking for the privilege of voting. He was willing to grant their request." The VWSA had organized an intense campaign to gather support, establishing local town committees, distributing leaflets and petitions, and holding public lectures, but the Senate rejected the measure. Pierce continued to support woman suffrage as a VWSA vice president representing Windsor County from 1887 until his death in 1896. In 1901, the VWSA paid tribute to Pierce's "manly advocacy of the municipal suffrage bill."

Julia Pierce (1841-1925) was a leader of the Rochester chapter and the Windsor County VWSA/VSEA and held offices at the state level, including vice president and president. At its 1915 meeting, the VESA recognized Julia's "long and faithful service" by appointing her life honorary president.

Ellen Pierce began to hold offices in the VWSA in 1901, when the organization met in Rochester for its annual meeting. Her service extended for over a decade, coinciding with the period of her sister's leadership. In 1901 and 1902, Ellen attended the VWSA annual meeting as a delegate from Rochester where she was appointed to the Committee on Business. In 1902, she traveled to Washington, D.C. with Julia to represent Vermont at the National American Woman Suffrage Association (NAWSA) convention; the Pierce sisters also represented Vermont at the NAWSA's 1906 national convention in Oregon and the 1912 convention in Philadelphia. From 1905 to 1907, Ellen was a superintendent of the Woman's Journal, the weekly newspaper that advocated for equal rights for women, especially suffrage. She was VESA treasurer from 1908 to 1913.

After her husband died, Ellen lived with Julia's family in Rochester. She was active in the Universalist church and supported community services such as the local library. In 1916, Julia and Ellen built a community center as a memorial to their husbands, Edward and Chester. After Julia's death in 1925, Ellen moved to Randolph, Vermont to live with her nephew, Chester E. Pierce. She died in 1934. 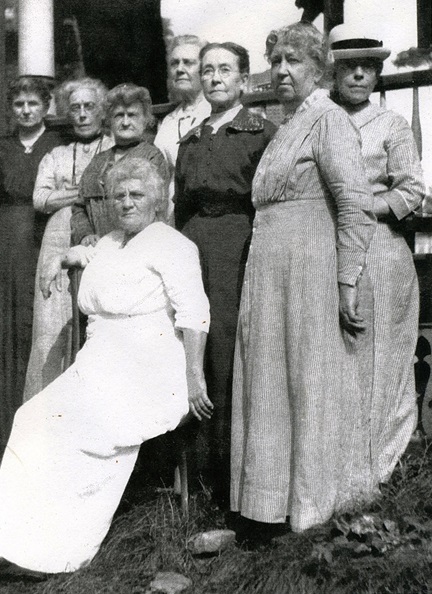