Priscilla Rice Edes was active in the Vermont Woman's Suffrage Association from 1892 to 1903, but she likely supported the right of women to vote for decades. Her daughter, Mary Louisa Edes Alfred (born 1853), recalled that she attended her first suffrage meeting at the age of twelve. She presumably accompanied her mother to this meeting, where she remembered listening to Mary Livermore and Susan B. Anthony.

Priscilla Pierce Rice was born in 1830 and she grew up in Concord, Massachusetts. She wrote about her childhood, including encounters with Louisa May Alcott and her family, in Some Reminiscences of Concord, a small pamphlet published in 1903. She married Robert Ball Edes, a merchant, in 1850 and they settled in Newton, Massachusetts, where Priscilla was active in Sunday school and charity work. Robert died in 1868 and Priscilla continued to reside in Newton until 1887, when she moved to Newport, Vermont to live with daughter Mary Louisa and her husband Frank Alfred, a judge. Edes passed summers in her cottage on Lake Memphremagog and some years wintered in the Boston area or traveled to warmer locations, including Coronado, California.

In Vermont, Edes devoted time to two reform movements--temperance and suffrage. She made her "first plea for temperance at the age of ten in the Unitarian Church as a Cold Water Army girl." Edes's daughter helped organize a Woman's Christian Temperance Union (WCTU) group in Newport, and mother and daughter both held leadership roles. Edes was responsible for youth and fair work. Her local fair work led to an appointment as a WCTU commissioner for the 1893 World's Fair in Chicago. Edes served as the Vermont Woman's Suffrage Association (VWSA) vice-president for Orleans County from 1892 to 1903. After attending the National American Woman Suffrage Association annual meeting in Washington, D. C. in 1891, she presented a report, "Echoes from the National AWSA Convention at Washington," at the 1892 VWSA convention.

Edes did not live to see passage of municipal suffrage for taxpaying Vermont women in 1917 or the ratification of the 19th amendment in 1920. She died in Newton, Massachusetts in 1914. After her death, the Newport Ladies Reading Circle honored her with a series of resolutions, including one that proclaimed, "... the wisdom and utility which she exercised in the faithful discharge of her duties, her long years of active service, contributions and counsel, and the continued interest in our circle after failing health and the infirmities of age came upon her, will be held in loving and grateful remembrance." 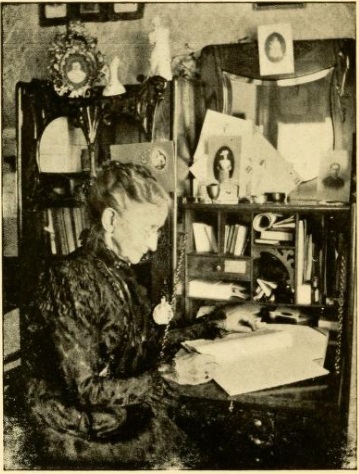 From Some Reminiscences about Concord (1903)