Elinor Majors Carlisle was born in Nebraska City, Nebraska on January 21, 1863 to Alexander Majors and Susan Dudley Wetzel. Majors was well-known as one of the founders of the Pony Express. Around 1881, Elinor married Albert Carlisle, owner of a printing business in Berkeley, California. They raised six children together, three sons and three daughters, in the San Francisco Bay area. Albert died in 1904 and Elinor never chose to remarry.

Carlisle was a well-renowned local community leader who was especially active in child welfare causes. She was a noted leader of the kindergarten and playground movement in the Bay Area. Carlisle organized the first Mother's Club in the Berkeley Schools. She was also a member of the Child's Welfare League, the Hillside Club, the Codornices Club, and the President of the Bay area Federation of Clubs. Carlisle also served as the director the Berkeley Chamber of Commerce. Perhaps most significantly, Carlisle was elected as the first female member of the Berkeley Board of Education in 1909, before women had achieved the right to vote in California. She ran with the support of the Good Government movement, a non-partisan group of progressive-minded individuals who sought to eliminate corruption in government.

As early as 1896, Carlisle was associated with several local suffrage organizations and vehemently fought for the passage of a suffrage amendment. She served as a leading member of the Citizen Suffrage League of Berkeley and the Political Equality Society of Alameda County in Oakland. Carlisle was a frequent speaker at suffrage meetings throughout the Bay Area. She became active in the National Woman's Party shortly after its formation in 1916. In December 1917 Carlisle traveled to Washington, D.C. to attend the Advisory Council Conference of the NWP as the state chairman for California. In this role, Carlisle helped organize NWP events in California including a 1919 meeting in San Francisco where NWP pickets, Amelia Walker and Vida Milholland, spoke about their experiences in jail on behalf of the cause. In October 1919, Carlisle traveled to Sacramento as a representative of the NWP to witness the legislature's ratification of the 19th Amendment and to thank the governor for supporting the suffrage amendment.

Carlisle was a supporter of the arts and a collector of Asian art. She made frequent trips to China in the 1920s with her daughter Alma. After losing her home and a substantial portion of her art collection in the 1923 Berkeley fire, the Carlisle family relocated to San Francisco. Carlisle continued her travels, collecting additional Chinese art and ceramics. Pieces from Carlisle's collection and passed down through the family have sold at auction for millions of dollars in recent years. She continued her club work and community activism until her death on November 24, 1932. Carlisle succumbed to heart disease at the age of 69 years old. She was buried in Cypress Lawn Memorial Park in Colma, California.

Read more about the significance of Carlisle's election to the Board of Education in Gayle Gullet, Becoming Citizens: The Emergence and Development of the California Women's Movement, 1880-1911 (Champaign: University of Illinois Press, 2000). For a description of the ratification of suffrage in California and Carlisle's part in it see "Women to View Suffrage Action," Oakland Tribune, October 28, 1919, 16. A biography of Carlisle appears in her obituary, "Former Berkeley Woman Passes Away," Berkeley Daily Gazette, November 25, 1932, 14. 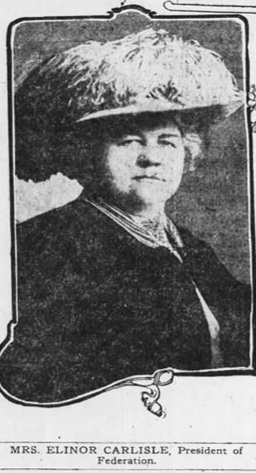