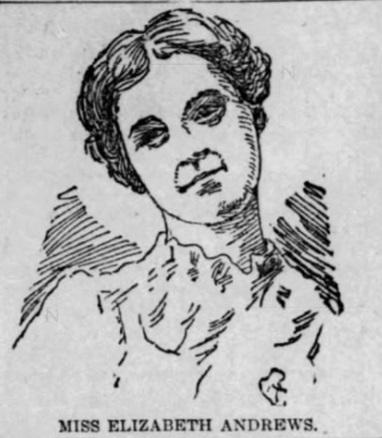 Elizabeth K. Andrews was born on November 24, 1874 in Atchison, Kansas. Her parents were George L. Andrews, a railroad conductor on the Chicago Great Western Railroad, and Harriet "Hattie" Morgan Warner Andrews, direct descendant of Daniel Boone and the daughter of Theodore Warner, famous for financing stage coaches on the Overland Trail in 1849. She had three sisters, Harriet "Hattie," Emily, and Janet, and one brother, Charles.

Elizabeth graduated from Central High School in Kansas City, Missouri in 1895. She was secretary of her graduating class and was described as "a bright and vivacious talker, full of wit and teeming with good nature, which makes her very popular." After graduation, she worked as a stenographer in Kansas City. She married Harry R. Walmsley, former state legislator, insurance salesman, and author, in December of 1910. Harry was largely responsible for the creation of the Missouri Department of Conservation, was President of the Missouri Audubon Society, and was newly divorced from his first wife, Lillie Sprague Walmsley. In Kansas City, Elizabeth was a member of the Botany and Biology Club of the Y.W.C.A. and the Eternal Progress Club.

In the spring of 1915, Elizabeth and Harry Walmsley, along with Elizabeth's sister Hattie Andrews, began a "Walking Tour to California" with two horses and a wagon. Over the next year, the trio ambled through northern Oklahoma and central and western Kansas. Elizabeth said in a newspaper interview in Winfield, Kansas, "We have no plans ... or rather, we have many plans all subject to change. We expect to locate to California if we like it." Hattie, a schoolteacher, published a series of newspaper features and editorials about their travels. She emphasized the importance of appreciating and conserving nature and boasted that she and her sister belonged "to that strange cult known as vegetarians." In August of 1916, Elizabeth and Hattie's mother, Hattie Warner Andrews, traveled by train to join her daughters and son-in-law where they had camped in Taos, New Mexico. Sadly, she died just a few days into her visit, and her daughters accompanied her body back to Kansas City.

By October of 1918, Elizabeth was in Washington, D.C. joining the suffragists protesting at the White House. She was one of twenty-one women, along with Lucy Burns and Alice Paul, who were detained by plain-clothes officers at the Capitol Building on October 28 as they attempted to march up the capitol steps with purple, white, and gold banners. In January of 1919, Elizabeth attended the trial of Bertha Arnold and Mary Nolan, two suffrage activists who had been arrested for setting fires outside the White House as part of the Watchfires of Freedom demonstrations. During the trial, Mrs. Nolan declared, "I am guilty if there is any guilt in a demand for freedom. I protest against the action of the President who is depriving American women of freedom. I have been sent to represent my State Florida, and I am willing to do or suffer anything to bring victory to the long courageous struggle. I have fought this fight many years. I have seen children born to grow to womanhood to fight at my side. I have seen their children grow up to fight us." According to Inez Haynes Irwin in The Story of the Woman's Party, "So great a storm of applause greeted these remarks that the Judge had thirteen of the applauders brought immediately to the dock and tried for contempt of Court. Thirteen women were sentenced to forty-eight hours in jail with no alternative of fines," including Elizabeth Walmsley.

Elizabeth (listed as "Mrs. H.R. Walmsley") was recognized in the February 1920 issue of The Suffragist, the official National Woman's Party publication, as one of 166 women awarded the "'prison pin,' emblem of the sacrifice of individual liberty for the liberty of all women."

It appears that Elizabeth never returned to Kansas City or to Harry Walmsley. The 1920 Census lists her living in Washington, D.C. and working as a typist for the War Department. She was granted a divorce in November of 1922. By then, she was living in New York City and working as a teacher. (Harry Walmsley married a third time in Kansas City in 1924 to Alice E. "Daisy" Weinrich.) After her divorce, Elizabeth moved to California, where she served as Recording Secretary for the Women's Universal Alliance in San Francisco, California in 1925. She undertook several overseas voyages to Europe and to Hawaii. Elizabeth Andrews Walmsley died in Los Angeles, California on April 25, 1961.

Irwin, Inez Hayes. The Story of the Woman's Party. New York, 1921. Project Gutenberg, https://www.gutenberg.org/files/56701/56701-h/56701-h.htm (Please note that Elizabeth Walmsley is listed as both "H.R. Walmsley" and as "Elizabeth Walmsley" in this publication.)

"Watch His Morning Meal: Mrs. Harry R. Wamsley, Who Was Given a Divorce Yesterday, Says Her Husband Began the Day with Moods and a Scant Repast." The Kansas City Times 25 October 1910. Newspapers.com, https://www.newspapers.com/image/653615151/?terms=lillian%20b%20walmsley&match=1