Florence Danks was born to Flora Caroline Spatzer and Samuel Danks on July 19, 1893 in Tacoma, Washington. The family moved to New York City in 1900 so that her parents could pursue musical careers. Florence's personal life was one of interest, as she was a beautiful and attractive actress. Taking the stage name Deshon, she began acting in the theater and then in films by 1915. She appeared in a total of twenty-three films during her career. She met her first lover, Max Eastman, moving in with him sometime after 1913. Their romance travelled with them from Greenwich Village to Croton-on-the-Hudson during the summer. But as most romances with Max Eastman, his fear of commitment spelled disaster for them. While there was still a relationship, it was not the same, which led to Florence jumping at the first offer she received. That offer arrived in July of 1919, prompting her to move from New York to California. Max followed and moved in with her that September. Eastman soon telephoned his friend Charlie Chaplin, and Florence began a romance with Chaplin.

While it is unknown when, or if she officially joined the suffragist movement, it could have been between 1913 and 1916. During the times neither she nor Eastman was in the city, they kept a constant correspondence. Aside from her connection to Eastman, she apparently connected with Doris Stevens, a member of the National Woman's Party, as well. Doris sublet her apartment to Florence when she came to New York in the later part of the decade. Other than being directly connected to two prominent suffragists, not much is known about Florence's activities. The one major event she has been linked to is the Metropolitan Opera House demonstration against President Woodrow Wilson that occurred in March 1919.

Unfortunately, on February 4, 1922 Florence was found unconscious in her apartment. The apartment had somehow been filled with gas from an open jet. While there were attempts to revive her, she died the next day in St. Vincent's Hospital. She was 28 years old, and may or may not have committed suicide. 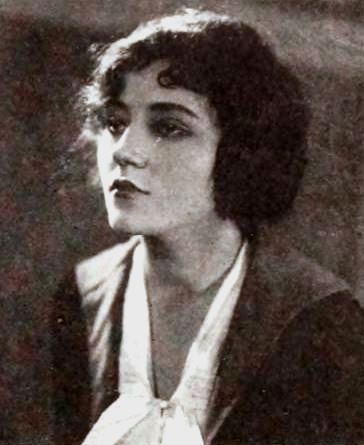 Still from the American mystery film Duds (1920) with Florence Deshon, on page 85 of the April 3, 1920 Exhibitors Herald.