Maria Albertina Kindberg was born in Ryd near the town of Skövde, Sweden, in October 1860; she immigrated to the United States in 1888. Kindberg met Maria Ingeborg Kindstedt, another recent Swedish immigrant, most likely in the United States. The two women developed a partnership in which they lived, worked, and engaged in suffrage activism together for many years. It is unclear how they met or where they lived until 1895 when their names first appeared in the Providence directory in the South Providence neighborhood. At that time South Providence was home to numerous immigrant groups, including an enclave of Swedes with a Swedish church located nearby. Kindberg and Kindstedt established and ran the Swedish Young Women's Home and Employment Agency in Providence. Kindberg, a midwife, worked as the matron at the institution. In 1909, she became a naturalized citizen of the United States.

Kindberg and her partner, Kindstedt, were strong supporters of the woman suffrage movement in Rhode Island. Their earliest reported activism was in 1910 when The Providence Journal reported that Kindstedt spoke at a suffrage hearing at the Rhode Island Assembly as a representative of a Swedish woman suffrage association. Kindberg was most likely a member of that organization as well. Articles about her suffrage activism often refer to her as M.A. Kindberg.

In 1909 Newport summer resident Alva Vanderbilt Belmont led the formation of the Women's Political Equality League in Rhode Island, an organization that focused on more public protest tactics and sought to bring more working-class women into the movement. By 1913, a Woman's Political Equality League branch was established in Providence with Kindstedt as the league's president and Kindberg its secretary. The organization was also often called the Women's Political Union (WPU). Kindberg and Kindstedt regularly hosted meetings of the organization at their home. The Providence Journal reported that the members of the Rhode Island group were "admirers of Mrs. Emmeline Pankhurst," the famous militant British suffragist. Alice Paul and Doris Stevens, national leaders of the Congressional Union for Woman Suffrage, a more militant group devoted to activism for a suffrage constitutional amendment, came to Rhode Island to speak to the WPU members about the Congressional Union. The Rhode Island WPU developed formal affiliations with the Congressional Union and the Women's Political Union in New York and Kindberg and Kindstedt became members of the Congressional Union. In addition, they also participated in Rhode Island Woman Suffrage Party events selling copies of The Woman's Journal, a suffrage newspaper, on the streets of Providence, to raise funds and awareness about the suffrage cause.

The Rhode Island WPU embraced the idea of militant tactics in support of suffrage. At one meeting, a member suggested that they pursue tactics similar to that used in the famous Dorr Rebellion in Rhode Island in the 1840s, a radical democratic movement that attempted to rewrite the state constitution, implement its own government, and seize an arsenal in order to provide the right to vote to all adult white men in the state instead of only property owners. The suffragists of the Rhode Island WPU also embraced more explicitly feminist rhetoric and ideas than that of the more mainstream Rhode Island Woman Suffrage Association (later called the Rhode Island Equal Suffrage Association). In 1914, for example, the members passed a resolution declaring that women had the right to "disobey man, man-made laws and man-preached commandments." These provocative discussions aside, the WPU did not undertake any major activities, militant or otherwise, in support of suffrage in Rhode Island beyond their regular meetings.

When it was announced that the Congressional Union would hold a Women Voters Convention from September 14-16 at the 1915 Panama-Pacific International Exposition in San Francisco, Kindberg and Kindstedt committed to attend. Kindberg sold her car and they purchased steamship tickets. In late summer they set off on a journey taking them through the recently opened Panama Canal and then on their way up the coast of California.

The Congressional Union, under the leadership of Alice Paul, had been for some time collecting names on a petition to present to the U.S. Congress and President Wilson. The petition had approximately 500,000 names and the intent was to take the petition from San Francisco to Washington D.C. in time for the opening of congress on December 6, 1915. Alva Vanderbilt Belmont, who was on the national executive committee of the CU and a Newport summer resident, may have known of Kindberg and Kindstedt, despite their different class backgrounds, due to their suffrage efforts back in Rhode Island. Paul learned that the two women had planned to purchase an automobile and drive back to Rhode Island. Paul, always one to grasp the opportunity for publicity, thought if women envoys could drive the petition to Washington it would get good press coverage for the cause as well as provide the opportunity to collect more signatures on the petition, establish new branches for the Congressional Union, raise money for the cause, and sell subscriptions to the CU's newspaper, The Suffragist. Kindberg purchased a new car, an Overland Six, and agreed to be the driver for the journey with Kindstedt performing the duties of mechanic.

Paul decided to add two Western women envoys to join the journey and be the face of the CU, giving talks and meeting with the press as they pulled into towns along the way. Paul asked Sara Bard Field, a poet and activist, and Frances Joliffe, a wealthy socialite, to represent the Congressional Union. But Joliffe dropped out at Sacramento due to illness. Also assisting was Mabel Vernon who traveled by train in advance of the envoys to make arrangements. Her primary task was publicity--to ensure upon their arrival a crowd and the press would be on hand to greet the travelers.

The cross-country, 3,000-mile, adventure set out from San Francisco on September 15. The trip took ten weeks, cut across eighteen states and the District of Columbia, and the suffragists stopped in numerous towns, giving speeches, and meeting with mayors and governors. In Rhode Island, Governor R. Livingston Beeckman hosted a reception for them. Newspapers across the country published stories about the suffrage journey. In Kansas, a journalist reported, "if you have any doubts as to woman's ability, as a voter, talk to Miss M.A. Kindberg of Providence, Rhode Island who drove the little car all alone through the wind and rain and sun. Miss Kindberg won't say much, because she believes in deeds instead of words."

Along the way the women encountered all sorts of mechanical and navigational problems. Often, the day's drive was fraught with great difficulty and personal hardship. The driver and passengers faced extreme heat in the deserts of Nevada. They confronted muddy or washed-out roads that were barely more than horse trails. Streams had to be forded. In the Midwest snowstorms had to be dealt with. The Overland Six was a convertible, so the drive eastward had to be uncomfortable as the envoys made their way into winter weather.

Bad weather and bad roads were not the only troubles encountered. The relationship between Sara Bard Field and the Swedish women became strained. Field referred to Kindberg and Kindstedt as "ladies of strong suffrage persuasion," but she saw them as volunteers and not as official envoys. Most likely, all the CU leadership felt the same. The Swedish women began to resent that Field was getting most of the attention. In an interview conducted many years later, Sara Bard Field recounted her memories of the trip. She described Kindberg as "a gentle and rather self-effacing soul who knew a good deal about driving because she had had a car in Providence." She explained that neither Kindberg nor Kindstedt "could speak very plain English. They spoke with decided Swedish accents and hadn't had much formal education." As a result, Field said, "Alice Paul had said to me before we left that it would be Frances Joliffe's and my duty to undertake all the speaking." She claimed that Kindberg was "evidently very much afraid of her companion [Kindstedt] or of not doing as her companion wished her to do." Field claimed that Kindstedt confronted her about not allowing her and Kindberg to give speeches and portraying them as "menials," who were just responsible for driving the car. Field said that she tried to explain to Kindstedt that the women did not speak English well and did not know much about the other parts of the country where they were speaking. She said that this explanation did not appease Kindstedt and that she said to Field, "I'm going to kill you before we get to the end of this journey." Field called the statement "terrifying" and claimed that she later learned that Kindstedt "had come out of an insane asylum... She'd been in a home for mental patients for a long time and had only been recently released."

While history books often credit Sara Bard Field for the success of the CU's cross-country publicity trip, it was Kindberg and Kindstedt's money, automobile and skills that allowed the petition to arrive safely and in time for the opening of Congress. The image the CU's leadership wanted to project was a young, fashionable and articulate one--neither Kindberg nor Kindstedt had any of these characteristics. They were in their fifties and Field described them as "stout" and "solid." In Chicago, a Hearst and Path newsreel of Sara Bard Field pretending to jack up the automobile and change a flat tire was made. It was good for show but not accurate and was further cause for tension among the women. An article in The New York Times on November 9, mentioned Sara Bard Field but also Frances Joliffe. Joliffe did not even make the grueling cross-country trip but did join the travelers on the East Coast. The article did not mention either Kindberg or Kindstedt at all. A handbill to announce the welcome of the women suffrage envoys on December 6, 1915 in Washington, D.C. mentioned both Field and Joliffe; Kindberg and Kindstedt were not referenced.

In March 1916, a small group of women, led by Kindstedt and Kindberg, received a charter from the state for a new organization, the Congressional Union of Providence, Rhode Island. Sara M. Algeo, a leading Rhode Island suffragist, wrote in her memoir that:

the two most courageous representatives of the Congressional Union in Rhode Island, were two local women, Mrs. [sic] Maria Kindberg and Ingeborg Kinstedt. [sic] They were of Swedish descent and like so many women of Northern Europe, seemed to have been born with an unquenchable longing for freedom. From its earliest inception the flag of Congressional Union, purple, white and gold, with a large sign Congressional Union, flew from their home on Westminster Street.

Kindberg and Kindstedt continued to work for woman suffrage until ratification of the Nineteenth Amendment in 1920. For the women, though, the afterglow of the suffrage achievement was short lived. On March 25, 1921, both women applied for passports; their stated purpose was to travel to Sweden to visit relatives. Their scheduled departure was to be on April 21. They did not depart for the trip as planned, though, and on June 6, Kindberg died of suicide in Providence. 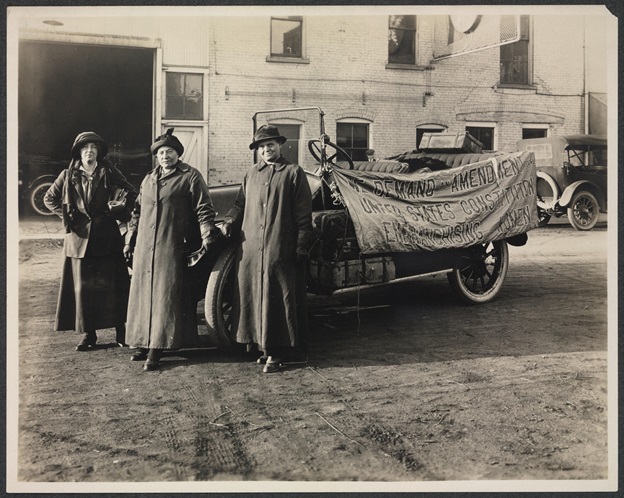 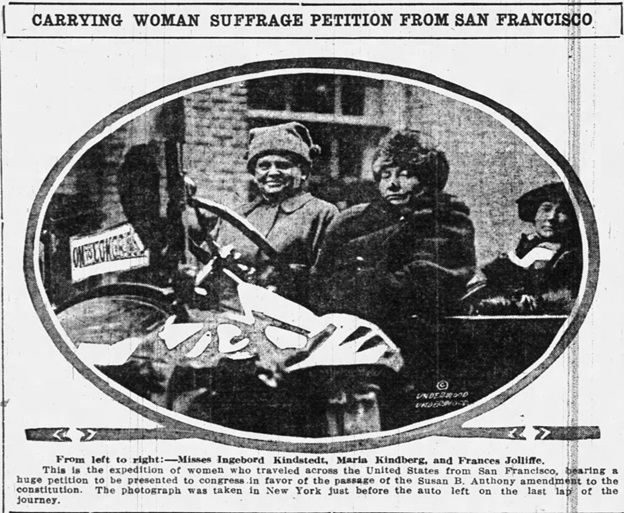 Author's Note: Russell DeSimone wishes to thank Anne Gass of Gray, Maine, who provided much information for this essay and is conceivably the leading authority on Maria Kindberg and Ingeborg Kindstedt.

Miller, Elisa. "Uncovering the Lives of Ordinary Rhode Island Suffragists, The Bridge: A Joint Edition of the Journals of Newport History and Rhode Island History (Fall 2020): 19-45.