Hannah Pickering was born in New York in 1896 to George Pickering and Reva T. Pickering, both of Pennsylvania. She was one of her parents' three children. Hannah Pickering attended Elmira College and graduated in 1918. Throughout her life she spent her time residing between Elmira, New York City and rural Russia.

Hannah Pickering, a member of the National Woman's Party, became one of the many women from around the United States who took the place of the women who were arrested. She marched to protest while President Woodrow Wilson spoke at the Metropolitan Opera House in March 1919.

In 1920, Hannah Pickering lived as a single lodger in Manhattan. She was working as a circulation manager for a magazine.

Hannah Pickering also engaged in charity and organization work. She assisted in the formation of an American Society for Cultural Relations with Russia, she was an American Representative of the Open Road Student tours in Russia, and she worked as a high school contact representative for the United States Employment Service. In an article in the Brooklyn Daily Eagle in March 1932, Pickering described her experiences in Russia. She used her time in Russia to work along peasants, and participate in relief work in both Russia and Poland where she would work amongst the Quakers.

In 1946, Hannah Pickering returned to the United States. She lived with her family in Elmira, NY or in Manhattan. She died on April 25, 1988, in Rochester, NY, and is buried in Woodlawn Cemetery in Elmira, NY. 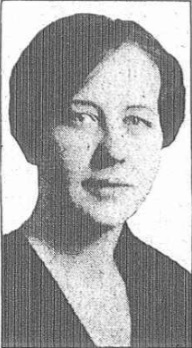