For a Notable American Women sketch, click here. [LINK to that other sketch from NAW]

Sara Bard Field was born in Cincinnati, Ohio on September 1, 1882 to Annie and George Bard Field, parents of Quaker and Baptist beliefs. Sara was named after her paternal grandmother, Sara Bard. The family moved to Detroit in 1885; Field grew up there with three sisters and a brother.

The marriage was stable, yet Field felt her mother feared her father, who was both puritanical and dictatorial. In an oral history, Field recalled her mother's Rhode Island Quaker stock as particularly liberal-minded in contrast with her father, a businessman who was a strict Baptist and raised his children that way. Her mother was an avid reader and lover of literature; her father functioned primarily as disciplinarian in the household. Field's two older sisters were eventually barred from the household. George Field refused to allow Sara to attend the University of Michigan and urged her to attend a smaller college with stricter religious policies.

Sara Field's simultaneous desire to please her father and flee his influence led her into a swift courtship and marriage to the Reverend Albert Ehrgott, a Cincinnati Baptist who was traveling to a new pastoral assignment in Rangoon, Burma; he was twenty years Field's senior. As Mrs. Ehrgott, Field spent a year in Asia being in turn delighted and shocked by unfamiliar cultures. She bore a son and, after the couple's return to the US in 1902, a daughter. The Ehrgotts resided in New Haven, Connecticut and Cleveland before moving to Portland, Oregon in 1910. Field's exposure to Progressive ideas and practices in both communities sparked her interest and activism.

It was in Portland that Field's life changed dramatically. She met and soon began working with Charles Erskine Scott Wood, an author, attorney, and activist thirty years her senior, for whom she would eventually leave her family. In 1911, she began working as an organizer for the Oregon College Equal Suffrage League, traveling around the state for two years. She also began writing news articles for the Portland Oregon Journal and poetry on the side. By the end of 1914, Field had moved to San Francisco (eventually living with Wood) divorced her husband and reclaimed her maiden name. Wood's Catholic wife would not divorce him; Field and Wood married in 1938 after her death.

In September 1915, Sara Bard Field began the journey that would immortalize her in suffrage history. She had met Alice Paul while working at the Congressional Union's display booth in the Education Building at the Panama-Pacific Exposition in San Francisco. The booth drew hundreds of visitors, who were urged to sign a grand petition urging the passage of a federal constitutional amendment for woman suffrage. Paul wanted a drumroll to focus the incoming Congress on the amendment; she conceived of a transcontinental petition drive from California to Washington DC, with many publicity stops along the way. Somehow, she persuaded Field to undertake this arduous journey in one of those newfangled "cars."

Field remembered asking Paul whether she knew "service stations across the country are very scarce, and you have to have a great deal of mechanical knowledge in case the car has some accident." The intrepid Paul downplayed the risk. "She said, 'Oh, well, if that happens, I'm sure some good man will come along that'll help you.'" After a lofty send-off during which a chorus sang a Field poem-set-to-music, Field set off with the great petition and two Swedish immigrants who had volunteered their car for the trip. Field wrote of the "envoys" trip for local newspapers and The Suffragist. "We get up at 6 a.m.," one article went, "jolt, bump, bounce, and shake over a hundred miles of awful roads, land weary to the breaking point." Yet the small town and press reception was everything hoped for. After nearly two months on the road, a lavish welcoming ceremony ended with Field and her companions delivering the outsized petition to the White House and President Wilson.

Sara Bard Field continued suffrage advocacy for Paul and pursued her own journalism and literary work. Late in 1918, her son was killed in an automobile accident and Field consequently had a nervous breakdown. She began publishing her poetry in the late 1920s. Field and C.E.S. Wood supported arts and left-leaning political causes during their years in San Francisco. After Wood died in 1944, Field moved to Berkeley to be nearer her daughter. She began recording an oral history for the Suffragists Oral History Project in 1959. She died in 1974. 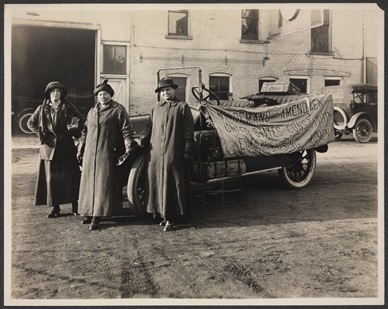 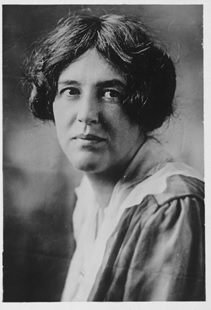