Bertha Berglin Moller was born in Sweden in 1888. Her family immigrated to the United States and she was raised on a farm near Rush City, Minnesota. After attending the Duluth Normal School, Berglin started her career as a schoolteacher. Berglin married Charles Frederick Moller in 1910. Due to her Swedish heritage and progressive attitude towards women, Moller developed an interest in women's suffrage. Two of Moller's uncles were government officials in Sweden, and supported women's rights.

Moller began organizing for the Minnesota Woman Suffrage Association (MWSA) in 1916. The MWSA existed from 1881 to 1920. The organization's goal was to obtain women's right to vote. Members of the MWSA organized marches, petitioned, gave speeches and wrote articles to sway the Minnesota Legislature to approve woman suffrage. MWSA was the largest of six suffrage organizations in the state. As a result of the efforts of 30,000 women, the Legislature eventually approved the Amendment in 1919. After working with the MWSA, Moller then worked devotedly for the Congressional Union and the National Woman's Party. In 1918, she served as the secretary of the Minnesota Branch of the National Woman's Party (NWP) for one year. She moved to Washington D..C. for a period of time , seeking stronger activism. Moller's most noteworthy efforts centered around her demonstrations in front of the White House and the Capitol. She dramatized the political struggle for the 19th Amendment by staging suffrage ballets in theaters throughout D.C. Throughout 1918 and 1919, Moller joined the marches and picketing by suffragists in Washington, D.C. As a result, she was arrested 11 times and served two short jail sentences. On one of those occasions, Moller led a hunger strike and was force-fed. Moller is credited with persuading the 1920 Democratic Party presidential nominee, James M. Cox, to support the drive for the 19th Amendment in Tennessee. In 1920 she also campaigned to lobby Warren G. Harding, the Republican presidential candidate on behalf of woman suffrage.

In 1921 Moller started law school at the University of Minnesota, researching laws about women and promoting the ERA . The Mollers moved to Chicago in 1923 where she finished law school at Northwestern University in 1925. She became an attorney for the IRS and the National Labor Relations Board. From 1924 through at least 1940, she also campaigned for the Democratic Party as a speaker for the Democratic National Committee.

Moller divorced Charles Moller sometime in the late 1920s; she married Peter Delin in 1930; he died in 1940. Moller returned to Minnesota at some point; she is recorded as living in Pine City, Minnesota in late 1940. She continued work on labor rights for women and the ERA. She died in San Francisco, California in 1951. 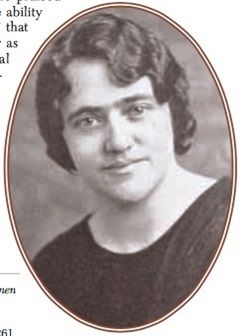