Nellie Griswold (later Francis) was born in Nashville, Tennessee on November 7, 1874 to Thomas Garrison and Maggie (Seay) Griswold. She moved to St. Paul, Minnesota in 1883, and graduated from Central High School in 1891 as the only black person among the eighty-four students in her graduating class. In 1893 she married William Trevanne Francis, who became the city’s leading Black attorney. An active member of numerous civic organizations, Nellie Griswold Francis was widely credited as the author of the anti-lynching law passed by the Minnesota state legislature in 1921. She and her husband moved to Monrovia following the latter’s appointment as consul general to Liberia by President Calvin Coolidge in 1927. After her husband died of yellow fever in 1929, Francis moved to Tennessee, and died forty years later in 1969.

Nellie Griswold Francis initially worked as a stenographer for Great Northern Railway Company, and later transitioned to work at West Publishing Company in the years before her marriage. She was better known among her contemporaries for her career in public service, having been an active member in a remarkable number of state suffragist groups and black women’s organizations from the 1890s to the 1920s. In 1914, she led a group of black women to found the Everywoman Suffrage Club (later the Everywoman Progressive Council) and became its first president. Following the ratification of the 19th Amendment, she became the Director of the Republican Colored Women for Minnesota campaign. Francis was particularly famous for her efforts to pass an anti-lynching law in her state, which intensified after the 1920 lynching of Elias Clayton, Elmer Jackson, and Issac McGhie. Francis’s efforts to network with predominantly white women’s groups such as the Woman’s Welfare League and the Schubert Club did much to build an interracial coalition which she directed to campaign against racial violence. In 1921, the Minnesota State Legislature passed the anti-lynching bill that Francis had authored, becoming one of the first state legislatures in the nation to do so.

At various points in her life, Francis was the President of the Minnesota State Federation of Colored Women, Chairman of the Press Department of the National Association of Colored Women’s Clubs, and a member of the NAACP and the Urban League. She was affiliated with both black churches and white religious groups, having been the President of the Missionary Circle at Pilgrim Church, a corresponding secretary for the Tri-State Women’s Baptist Convention, as well as a member of the League of Protestant Women. She was also the Precinct Chairman for the Council of National Defense, and a Member of the Executive Board of the Lincoln Republican Club. Despite her deep involvement in Minnesota politics, Francis rarely visited the state following her husband’s death and her move back to Tennessee. Francis was buried beside her husband in Greenwood Cemetery. 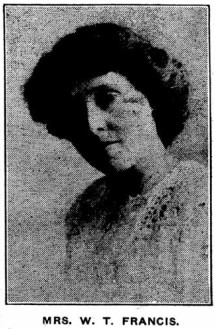