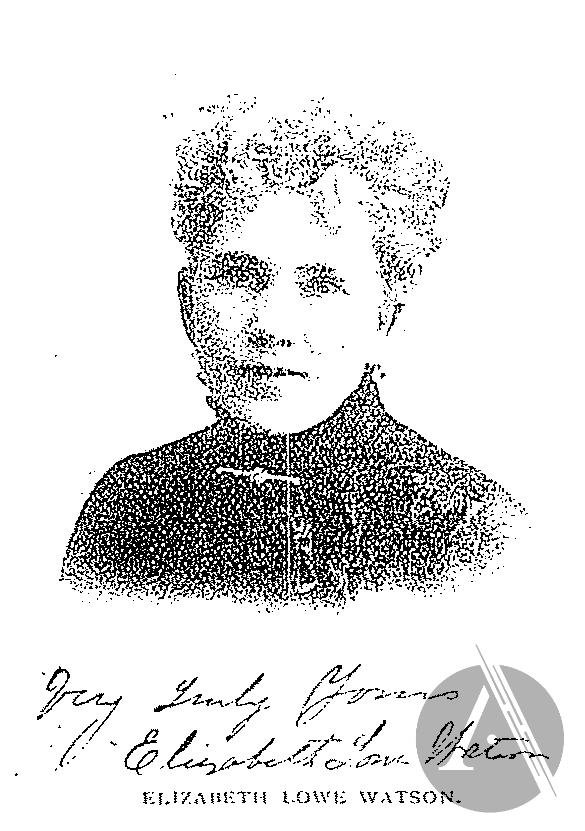 WATSON, Mrs. Elizabeth Lowe, lecturer, born in Solon, Ohio, 6th October, 1842. Her maiden name was Low, which was changed to Lowe by the younger members of the family. Her father was of Teutonic descent, born in New York, and her grandfather, of the Knickerbocker type, had large landed possessions in "Old Manhattan Town." Her mother was of Scotch stock. Her grandmother, Mary Daniels, was a remarkably intelligent woman, with a poetic, religious temperament possessed of psychic gifts, the nature of which was then a profound mystery. Mrs. Watson was the ninth child in a family of thirteen, ten of whom are living. At the age of eight, remarkable psychic phenomena, of a physical nature, were manifested through her, and a few years later she became developed as an "inspirational" speaker, so-called. At fourteen her public ministry began, attracting great crowds of people to hear her discussion upon religion and social ethics. She then, as in later years, often answered all kinds of questions from the audiences, and usually the subject of her lecture was chosen by a committee. In 1861 she became the wife of Jonathan Watson, one of the oil kings of Titusville, Pa. She was a devoted wife and the mother of four children, only one of whom is living. For some years after her marriage she discontinued her public work, except to officiate at funerals. Recently she has resumed her ministry of love, and, removing to California, for seven or eight years she lectured nearly every Sunday in San Francisco, for much of the time as the regular pastor of the Religious and Philosophical Society of that city. She lectured in 1882 through Arts train, attracting large audiences. Her recent lectures in Chicago and other parts of the East were successful. Her work is principally devoted to the elevation of mankind morally and spiritually, to moral, social and religious reform, including the advancement of woman in all proper directions. After meeting many reverses and bereavements, she finds herself now possessed of a productive fruit farm, "Sunny Brae." in Santa Clara county, Can, which brings an annual income of between four-thousand and live-thousand dollars. She superintends the entire business.