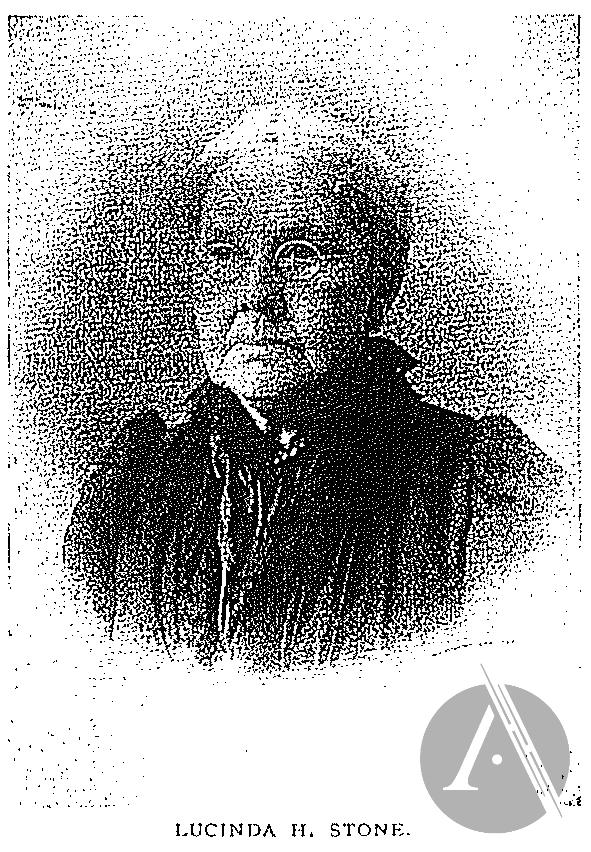 STONE, Mrs. Lucinda H., educator and organizer of women's clubs in Michigan, born in Hinesburg, Vt., in 1814. Her maiden name was Lucinda Hinsdale. Her early years were passed in the quiet life of the sleepy little town, which was situated midway between Middlebury and Burlington, and the most stirring incidents of her youthful days were the arrivals of the postman on horseback, or the stage coaches, bringing news from the outside world. As a child she read eagerly every one of the local papers that came to her home, and the traditional "obituaries," the religious revivals called "great awakenings," the "warnings to Sabbath-breakers" and the "religious anecdotes" that abounded in the press of that country in those days were her especial delight. The reading of those articles left an impression upon her mind which time has never effaced. Her interest in educational and religious matters can be traced directly to the literature of her childhood days. Her early desire for knowledge was instinctive and strong. Study was life itself to her. Luanda's father died, when she was three years old, leaving a family of twelve children, of whom she was the youngest. After passing through the district school, when twelve years old, she went to the Hinesburg Academy. Site became interested in a young men's literary society, or lyceum as it was called, in Hinesburg, to which her two brothers belonged. That modest institution furnished her the model for the many women's libraries which she has founded in Michigan, and through which she has earned the significant and appropriate title of "Mother of the Women's Clubs of the State of Michigan," Lucinda spent one year in the female seminary in Middlebury. Acting upon the advice of a clergyman, she returned to the Hinesburg Academy, where she entered the classes of the young men who were preparing for college. She kept up with them in Greek, Latin and mathematics, until they were ready to enter college. That experience gave her a strong bias of opinion in favor of coeducation. From the Hinesburg Academy she went out a teacher, although she strongly wished to go to college and finish the course with the young men, in whose preparatory studies she had shared. She became a teacher in the Burlington Female Seminary, where the principal wished to secure a teacher who had been educated by a man. As she answered that requirement, she was selected. She taught also in the Middlebury Female Seminary, and finally a tempting offer drew her to Natchez, Miss., where she remained three years. In 1840 she became the wife of Dr. J. A. B. Stone, who was also a teacher. In 1843 he went to Kalamazoo, Mich., and took charge of a branch of the Kalamazoo University. He also filled the pulpit of a small Baptist Church in that town. Mrs. Stone could not resist her inclination to assist hex husband in teaching, and she took an active part in the work of the branches, which were really preparatory schools for the university. The successor of the university is Kalamazoo College, of which Dr. Stone was president for twenty years. The college was a coeducational institution, and the female department was under Mrs. Stone's charge. Dr. Stone was always a warm advocate of the highest education for women and of coeducation in all American