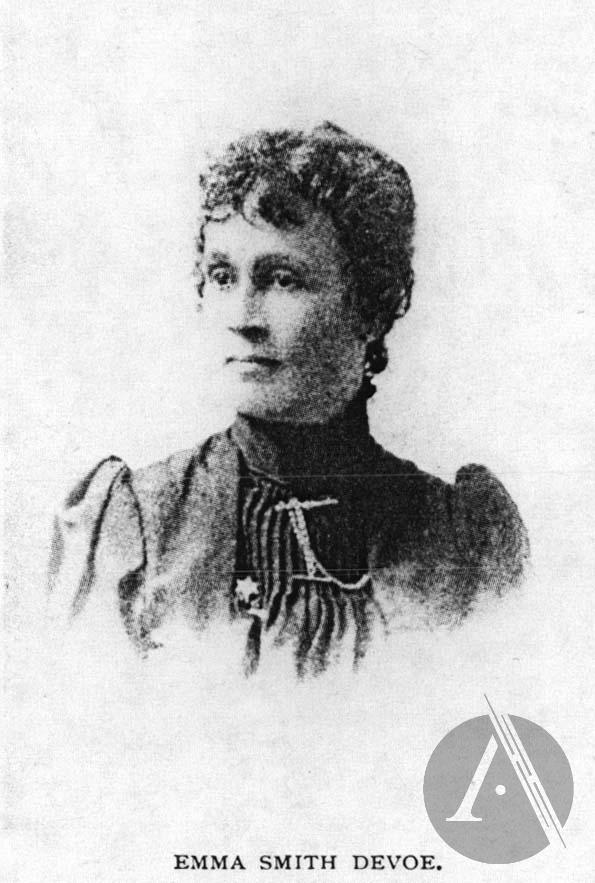 DEVOE, Mrs. Emma Smith, woman suffragist, born in Roseville, Warren county, Ill., 22nd August, 1849. Her parents were strictly orthodox, her father having been a deacon in the Baptist Church for forty years. In early life Miss Smith moved with her parents to the village of Washinton, Tazewell county, Ill., where she lived till her marriage. In youth she developed a remarkable talent for music, which her parents employed every means in their power to cultivate. At the age of nineteen years she was made a member of the faculty of Eureka College and placed in full charge of the department of music, which position she filled with honur to herself and credit to the institution. In 1879 Miss Smith became the wife of J. H. DeVoe, of Washington, Ill., and soon after they moved to Huron, Dak., where they lived till 1883, when they removed to Faulk county, Dak., and founded the village that bears their name. About a year thereafter they returned again to Huron, where Mr. DeVoe engaged in mercantile business. During the summer of 1889, while filling the office of assistant State superintendent of franchise for the Woman's Christian Temperance Union of South Dakota, Mrs. DeVoe first attracted public notice and began to develop as a public speaker. In a convention in St. Lawrence, S. Dak., in June of that year, she read an essay on "Constitutional Prohibition and How to Secure It," which was copied by various newspapers throughout the State and brought her before the reading public. During the following summer her fame spread over the entire State as a most forcible and logical public advocate of the equality of the sexes. A provision in the constitution under which South Dakota was admitted into the Union required a vote of the people to strike out the word male in the clause describing the qualifications of an elector, and in consequence, at the first State election, a very spirited campaign was waged by the noble-minded women of the State, assisted by the officers of the National American Equal Suffrage Association, for the enfranchisement of their sex. Before the campaign had got fairly under way. Mrs DeVoe's fitness for the wort, coupled with her untiring energy, placed her in the front rank of the advocates of equal suffrage. Her house in Huron was the birthplace of the State organization, and all friends of the cause she cherished found warm welcome there. Her home was the headquarters of the noted workers within the State, and also of the committee having the campaign in charge. She was made State lecturer and a member of the executive board, and was constantly in the field from early spring till the close of the campaign. The State agricultural board placed her in charge of Woman's Day at the State fair, held in Aberdeen in September. That novel and entertaining feature of the fair originated with Mrs. DeVoe, and the success of the enterprise was abundantly manifest in the increased attendance, the gate receipts being more than double that of any other day during the fair. The suffrage songs, composed by her husband, with which she embellished her lectures, had a very pleasing effect. Although the cause of equal suffrage was unsuccessful in South Dakota, the courage of Mrs. DeVoe was in no wise daunted, for immediately after election she commenced planning for future work and was the first publicly to adjure her co-workers to renewed efforts. In the spring of 1891 Mr. and Mrs. DeVoe removed from Huron to Harvey, Ill., where they now reside. In their new home Mrs. DeVoe found many congenial spirits and immediately organized an equal suffrage society, which through her efforts has grown to be the largest local suffrage society in the State. She is president of the local and also of the first Congressional district societies. In 1892 she lectured throughout Iowa in the interest of the Iowa State Equal Suffrage Association.