Helen Elizabeth Holmes was born on July 8, 1836 in Lockport, New York. The eldest daughter of Alfred Holmes and Frances Lewis, Helen went to school and graduated in Lockport, NY. She then attended school in Ypsilanti, Michigan, before returning to Lockport to live with her parents. Helen Holmes married Edwin A. Charlton on March 20, 1862. They moved to Wisconsin in 1870 when Edwin Charlton became the superintendent of the first Normal School in Platteville, WI. They had two children, Walter Holmes (1866-1875) and Winifred Holmes (1874-1902). In May 1879, Edwin Charlton bought the Brodhead Independent newspaper in Brodhead, WI, where they resided. He was chronically ill and so Helen Charlton did most of the work as editor of the paper. After her husband passed away in 1896, Helen Charlton continued to edit the paper until June 1904.

In 1895, Helen Charlton became editor of the Wisconsin Citizen newspaper, the official paper of the Wisconsin Woman Suffrage Association (WWSA). She continued in this position until her death in 1906. She was also Vice President-at-Large of the WWSA between November 1891 and November 1892, and again between December 1893 and October 1894. She served as First Vice President from 1895 to 1896. Charlton held many offices in the WWSA, was a member of the Woman's Christian Temperance Union, Sons of Temperance, and the Women's Relief Corps. She also spoke at many WWSA meetings and women's conferences around Wisconsin. Charlton is mentioned as a speaker at the First District Women's Suffrage Convention in March 1892 and also spoke at the Fifth Anniversary of the Women's Relief Corps as the organization's department president in April 1896.

Helen Charlton's daughter Winifred passed away in November 1902 after which time Charlton's own health began to deteriorate. She moved back east to be with family but this did not improve her health. After moving back to live in Brodhead, WI, Helen Holmes Charlton passed away on December 19, 1906. 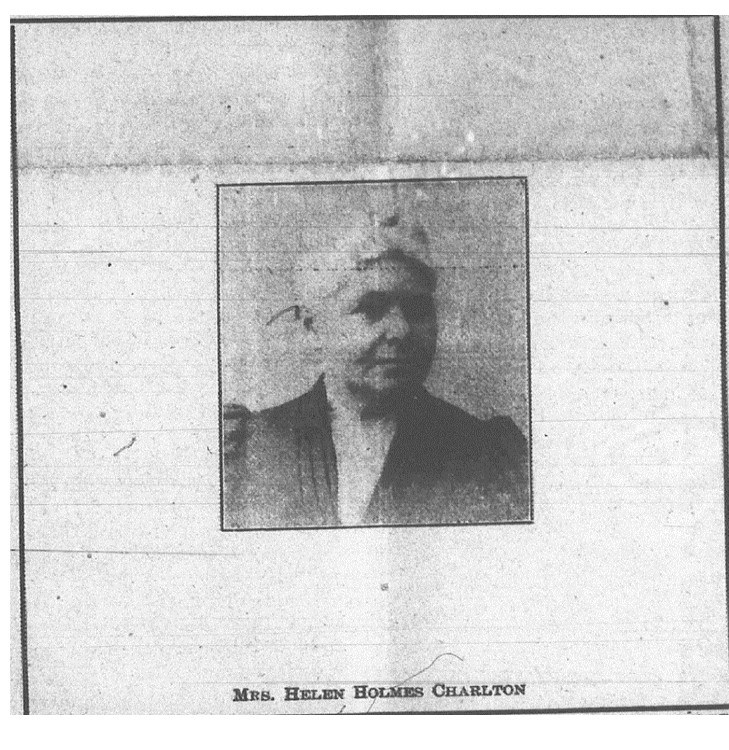 ●No hits with either of their names in just a regular Google search.

●Also found an article edited by Helen and her Husband on the site for the Brodhead Independent Newspaper. Able to find history of her Husband and his work and their work for the newspaper

●Then went to Ancestory.com and put her husband's name in and found his and her wills.

●Did a search for the Brodhead Independent Newspaper and found a Google book about the History of Green Co WI which begins on pg 616 where it talks about Edwin's work history and both their work at the paper.

●I then searched the Newspaper Archives site- I searched for Helen's name and found a bunch of newspaper articles and limited that to the 1890's when she was active as an editor. I came across articles in the Janesville Gazette, and Racine Journal from 1890, 1892 and 1894 which mentioned she spoke at or attended many women suffrage conventions and meetings around Wisconsin.

●I looked at the Wisconsin Citizen newspaper on Microfilm for Aug 1887-1899 which mentions her a few times attending women's Suffrage events in Wisconsin. She is also printed as the Editor of the paper from 1898-1988.

●I then continued to look at the Wisconsin Citizen that continues till 1914. This is where I found the Memorium for Helen in the December 1906 issue. This is where I found and used most of the information for my biography. It talked about her early life, working with her husband for the newspaper, her Suffrage work, her husband's and daughters' deaths, and people who reflected on the work she did throughout her life.

●This is also where I found the picture of Helen as well.